As 2017 draws to a close, we look forward to exciting things to come in 2018, from extraordinary new books to a new range of events, and more. 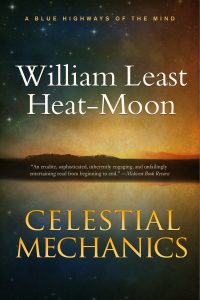 CELESTIAL MECHANICS: A Novel by William Least Heat-Moon (deluxe paperback edition)
In the most recent review of the hardcover edition, noted scholar David J. Nemeth, Ph.D., raves “Celestial Mechanics is both a “Blue Highways of the mind” and a PrairyErth that explores a particular place – the Hundred — at a more intimate and detailed and profound scale. As a philosophical novel, CM is darkly ethereal and engaging reading. Mortality and morality come to forefront … Celestial Mechanics boldly yet cautiously transcends certain bounds of natural modern fiction and moves into contingent realms of unnatural postmodern storytelling.” And Midwest Book Reviews calls it, “An erudite, sophisticated, inherently engaging, and unfailingly entertaining read from beginning to end … unreservedly recommended,” while Publishers Weekly says, “In his fiction debut, Heat-Moon (Blue Highways) stages philosophical and spiritual debates in an elegant story of one man’s search for meaning in the cosmos. . . . This thought-provoking novel is rife with relatable and complex musings.” 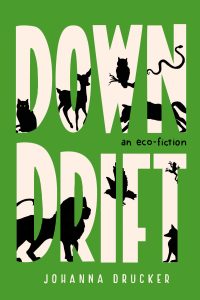 DOWNDRIFT: An eco-fiction by Johanna Drucker
Imagine a world in which squirrels begin to knit, rats start craving disco music and metallic leisure-ware, and pet dogs and cats seek celebrity careers—a world where differences between animals starts to blur, as if some mad rush is propelling genetic code to propagate across every form of flesh and living matter. In DOWNDRIFT, the brilliant new eco-fiction by artist, cultural critic and historian Johanna Drucker, a distressed future includes such imaginings, painting a picture of a melancholic future of declining individuality even in the animal kingdom—a future drawn from the impact of ecological pressures on animals that have been building for years. Narrated by an Archaeon, a 3.8 billion-year-old species, DOWNDRIFT follows a year of changes as noted in the travels of a housecat and a lion who are inexplicably driven toward a rendezvous. Droll and poetic, the tale is filled with witty vignettes and poignant reflections on the ways the pressures on the once-natural world are accelerating mutations in behaviors among the animals. 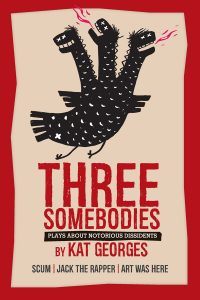 THREE SOMEBODIES: Plays about Notorious Dissidents by Kat Georges
The current surge in awareness of the pervasiveness of sexual harassment has sparked the public outing, shaming, and punishment of celebrity perpetrators like never before. One wonders: where will this all lead us? Is it a temporary “witch hunt”—as some claim—that will soon subside? Or will this shift in attitudes lead to true gender equality? Or . . . will all of this ride a wave to the ultimate situation described in The SCUM Manifesto—Valerie Solanas’ 1967 brilliant, dark, arguably satirical guide for her radical feminist cult The Society for Cutting Up Men? Three Rooms Press co-director Kat Georges offers three original plays including SCUM: The Valerie Solanas Story,” “Art Was Here,” inspired by poet-pugilist and Dada precursor Arthur Cravan, and “Jack the Rapper,” a mash-up of Jack the Ripper and T. S. Eliot. Look for a series of staged readings throughout the US starting with the NYC launch in March.

MAINTENANT 12: A Journal of Contemporary Dada Writing and Art
The twelfth edition of our annual dada journal is set to hit the shelves in June 2018 and will feature work for every continent except Anarctica and more than 40 countries. Cover art by Nicole Eisenman to be revealed soon. Trust us–you will be amazed! Still time to submit your dada work until January 15. This year’s theme is “We Are All A ‘Like’” offering contributors a chance to comment on the effect of social media on the modern world.

In addition to our books, early 2018 will offer a full range of madcap events, beginning January 5 at Cornelia Street Cafe with our 11th Annual Charles Bukowski memorial reading.