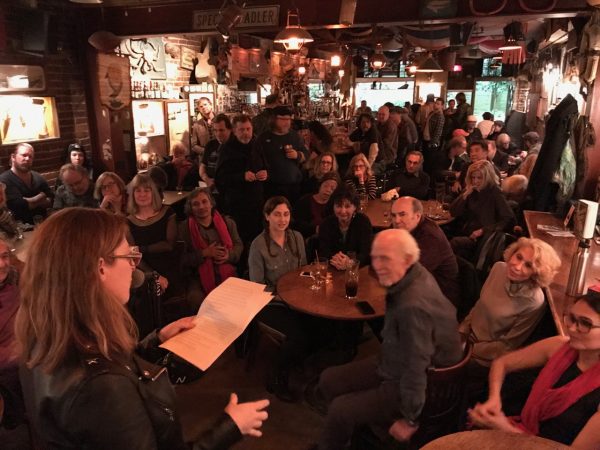 The scene at December 10 DA-DO-SF 5 at the legendary Specs Bar in San Francisco’s North Beach neighborhood. When adversity hits, art hits back harder.

2017 was a year marked by political upheaval, rollercoaster emotions, and a strenghthening of bonds in the literary and artistic community. For Three Rooms Press, 2017 was full of challenges, countered by some unbelievably wonderful accomplishments that reminded us of why we are driven to continue to publish books that add to the world of ideas. We published our first hardcover book by renowned NY Times bestselling author William Least Heat-Moon; we hosted a spectacular launch of Phil Marcade’s memoir PUNK AVENUE, drawing more than 500 people and proving that punk rock never died; we earned extensive national publicity for THE OBAMA INHERITANCE: Fifteen Stories of Conspiracy Noir, edited by Gary Phillips, with rave reviews on NPR’s Fresh Air, The Washington Post, Newsweek, and Chicago Tribune. Here’s a play-by-play of some of the most exciting moments throughout 2017. 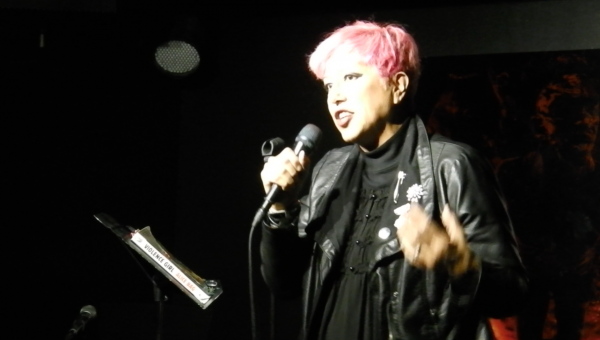 April 2017
April 10: Publication of 3RP’s first hardcover book, CELESTIAL MECHANICS, a novel by revered New York Times bestselling author William Least Heat-Moon (Blue Highways, PrairyErth). Heat-Moon’s early work was a strong influence in our development as authors and publishers, and we were extraordinarily honored to have the opportunity to publish his debut novel, which Midwest Book Review calls “An erudite, sophisticated, inherently engaging, and unfailingly entertaining read from beginning to end.” To celebrate the book launch, we traveled to Heat-Moon’s hometown of Columbia, MO, ate at famed Boochie’s! The launch event at St. Louis Public Library – Scholarly Branch, co-hosted by Left Bank Books, featured Heat-Moon delivering a fascinating presentation about the common thread between all members of humanity, and the need to understand human life intellectually and emotionally, bridging divides currently plaguing the country.

Related events: May 2: William Least Heat-Moon book launch at Flat Branch Pub. In his hometown of Columbia, MO, the renowned author turned a book signing event into a fundraiser, offering signed original printouts of early versions of his manuscript to raise money for University of Missouri Libraries’ Special Collections. May 4: An Evening with William Least Heat-Moon at Kansas City Public Library.

May 2017
May 2: NYC Launch of PUNK AVENUE: Inside the New York Underground 1972-1982, by Phil Marcade, with Preface by Debbie Harry and foreword by Legs McNeil. One of our biggest launch events ever went down at Le Poisson Rouge, where a packed house of more than 500 celebrated the unveiling of Marcade’s brilliant memoir of the early punk scene. Marcade, founder and lead singer of beloved punk blues The Senders, kicked off the evening with a conversation with Legs McNeil (Please Kill Me), followed by a astounding night of music. Featured bands and performers including the incredible Daddy Long Legs, amazing singer/songwriter Lynne Von, original Heartbreakers band member Walter Lure with The Waldos, with special appearance by Andy Shernoff (The Dictators), and a rousing Senders set by The Rousers and friends that included guest appearances by Steve Shevelin, Barry Ryan, Danny Ray, JF Vergel, Lenny Kaye, and Phil Marcade himself. PUNK AVENUE has received rave reviews, with MOJO Magazine dubbing it “A suave evocation of a lost, grittier New York,” and Library Journal proclaiming “Marcade’s great sense for storytelling, as well as his knack for being in the right place at the right time, makes this a must-read for those interested in the history of punk.”

May 5: Launch event for THE GREENFATER, the hysterical mob satire by Emmy-nominated comedy writer John Marshall. The event featured readings by Sirius XM host Frank Conniff, and comedians Paul Mecurio and Debbie Shea. Marshall has written for The Chris Rock Show, Politically Incorrect and other late night comedy. His book received rave reviews, including this gem from Publishers Weekly: “Even Don Corleone would laugh at this clever, funny story.” 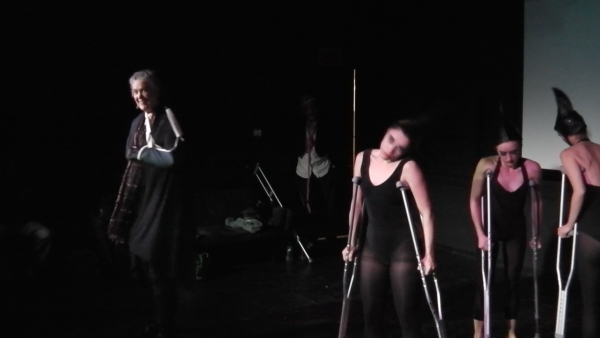 Still from performance piece by Linda Albertano at LA di DADA 5 at Beyond Baroque, June 10.

June 2017
June 2: Dada Salon at Cornelia Street Cafe, NYC; June 5: Dada Salon at Le Poisson Rouge, NYC; June 10: LA-di-DADA at Beyond Baroque, Venice, CA. Our annual release MAINTENANT: A Journal of Contemporary Dada Writing and Art seemed especially poignant this year, with the atmosphere of political upheaval, threats of nuclear war, and growing racism, framed as “populism” throughout the world. Events were packed, and the surge of creative forms of protest could not be stymied. The theme? “Eye for a Lie.”

July 2017
July 30: An afternoon of Contemporary Gothic Poetry celebrating the birthday of Emily Brontë at The Parkside Lounge, NYC. Goth poetry has seen a surge in recent years, and TRP celebrated with readings by TRP editor Constance Renfrow, Things to Do When You’re Goth In the Country author Chavisa Woods, and critically-acclaimed essayist (and Goth!) Deidre Coyle. 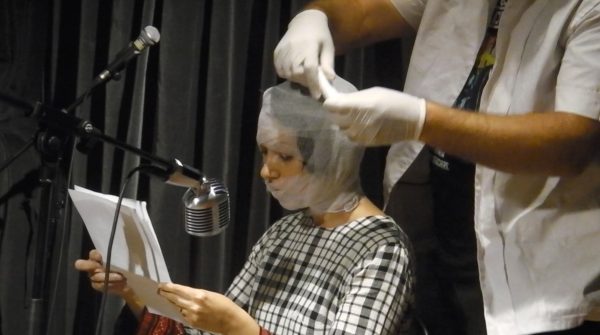 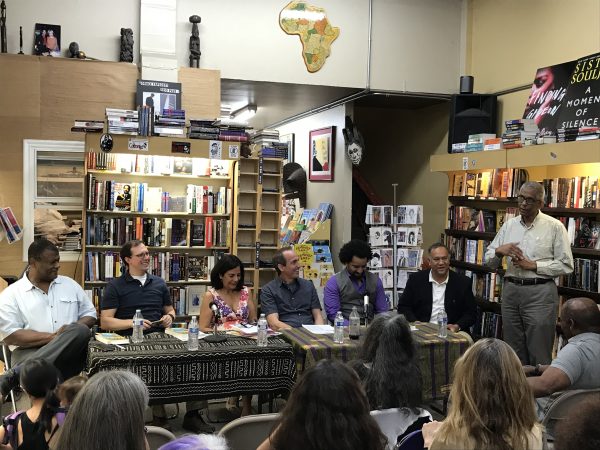 Book launch for THE OBAMA INHERITANCE at Eso Won Books in Los Angeles.

October 24: Book Launch for THE OBAMA INHERITANCE: Fifteen Stories of Conspiracy Noir at Eso-Won Bookshop, Los Angeles, CA. At one of the most prestigious African-American focused bookstores in the U.S., 3RP presented editor Gary Phillips, plus contributors Christopher Chambers, Désirée Zamorano, Danny Gardner, Eric Beetner, and Travis Richardson. THE OBAMA INHERITANCE has been a runaway success with rave reviews on NPR-Fresh Air (“Stories so sly, fresh and Bizarro World witty, they reaffirm the resiliency of the artistic imagination.”), The Washington Post (“Conspiracy theories about Obama spun out to their wackiest sci-fi conclusions … Resistance takes many forms, particularly in the current political climate. Few methods of protest are as cheerfully strange and purposefully bizarre as THE OBAMA INHERITANCE.”), Newsweek (“Top 15 Recommended Fall Titles” and “Top Seven New Books to Make You Happy You Can Read”), and Chicago Tribune (“Truth may be stranger than fiction, but why should the conspiracists have all the fun of creating fake narratives?”).

October 20: Bronx Power Poets at Cornelia Street Cafe, NYC. An evening of poetry by three emerging poets from The Bronx, including Rebecca Y.S. Perez, Melodic, and Joel Gonzalez. A great chance to hear new voices in a rare Manhattan setting.

October 31: Release of FIRST-PERSON SINGULARITIES: Stories by Robert Silverberg with an introduction by John Scalzi. This collection of 18 stories, all written in the first-person, showcases the writing of beloved Sci-Fi Grand Master Robert Silverberg from five decades of his storied career. Library Journal says, “If you’re a fan of sci-fi stories, or if you’re interested in introducing a friend to the genre, this title is an excellent choice.” Starred review by Publishers Weekly raves, ““Genre legend Silverberg’s ambition, imagination, versatility, and skill are all in evidence in this superior collection of 18 thought-provoking first-person short stories, which were written over five decades. Time and again, Silverberg sets the bar high for himself and then clears it. . . .” Starred review by Kirkus Reviews raves, “The sheer diversity of storylines is nothing short of extraordinary. . . . A singularly unique collection.” 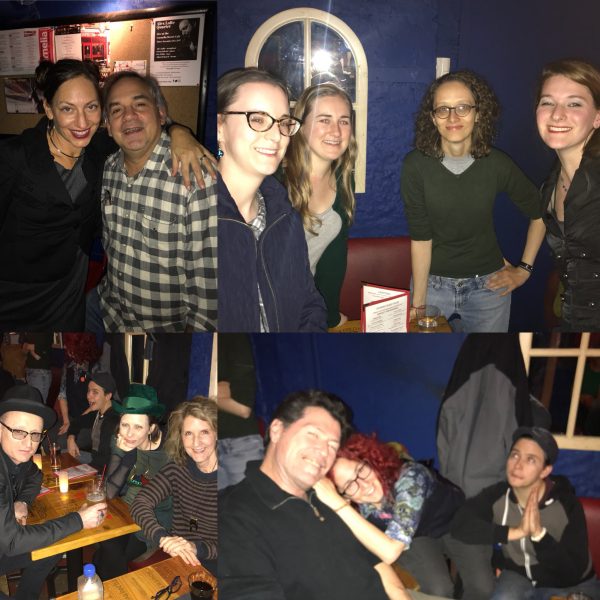 Thanks to all the fine authors and contributors for making this year so special. And huge thanks to all readers and supporters of Three Rooms Press, without whom, we’d be nowhere. We vow to continue to contribute ideas and stories of value to the world, and seek out work that will be meaningful—and enjoyable! Happy New Year!