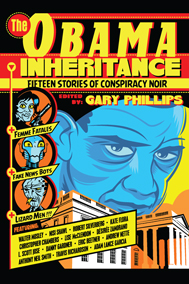 The Obama Inheritance, with its thrilling collection of 15 pulpy stories of “conspiracy noir,” has struck a nerve in the nation’s reading public, netting another rave review in today’s Washington Post.

Resistance takes many forms, particularly in the current political climate. Few methods of protest are as cheerfully strange and purposefully bizarre as “The Obama Inheritance.”

Three Rooms Press fans are telling us that this book will definitely be on their holiday gift list. And why not? Just check out all the high-octane press it has garnered.

“It’s a commonplace these days to say that real life has become so unpredictable that it outstrips anything anyone could dream up in fiction. I think I’m guilty of having made that banal observation a few times. But that was before I read The Obama Inheritance, a collection of 15 stories so sly, fresh and Bizarro World witty, they reaffirm the resiliency of the artistic imagination.” —Maureen Corrigan, NPR Fresh Air

“Truth may be stranger than fiction, but why should the conspiracists have all the fun of creating fake narratives? … Yet, running beneath the book’s mockery of conspiracy fanatics, the unspoken question that I raised earlier persists: Why are there so many outlandish conspiracy theories about the Obamas? The answer, I believe, can best be detected as this book’s authors do, through the lens of identity — and I’m not talking only about race.” —Clarence Page, Chicago Tribune

“Stories that are often humorous, always entertaining, and mostly non-political, and that make use of the more absurd conspiracies surrounding Barack Obama and his presidency.” —Mystery Scene Magazine

“High-octane creativity at work. . . . Some of these stories are laugh-out-loud funny, while others are immensely disturbing simply because you know that somewhere, someone actually believes this ridiculousness for real.” —Manhattan Book Review

“Wildly inventive, and smarter than the entire GOP combined, The Obama Inheritance is rich with tales to keep a reader up late into the night. Look at this Murderer’s Row of talent! You can’t go wrong. On top of that this book is a hell of a lot of fun.” —Victor LaValle, author of The Changeling