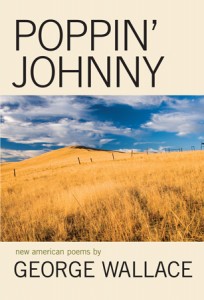 In honor of this incredible award, this November, we’re pleased to offer another special DOUBLE backlist feature—this time featuring the poetry collections of George Wallace, who is also the writer in residence at the Walt Whitman birthplace and author of thirty-one poetry collections! For the entire month, Wallace’s EOS: Abductor of Men and Poppin’ Johnny will each be discounted to only $10 on our website, through November 30, 2017. 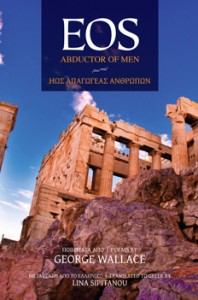 EOS: Abductor of Men
In a bilingual collection (Greek-English) dedicated to the contemporary struggles of the Greek people, George Wallace rivets readers with his thoroughly original, modern day beat flow, elevating bakeries to the temples of gods and love to a powerful river. “Like no other poet you’ve read before…Wallace doesn’t want to simply remake the conventions of the contemporary free verse poems as we understand them; he seems to want to remake the reader herself, to alter her aesthetically and psychologically,” says Terri Brown-Davidson, Pedestal Magazine. With stunning translations to Greek by Lina Sipitanou, this book is like no other you’ve read before.

Poppin’ Johnny: New American Poems
Poppin’ Johnny: New American Poems by George Wallace is a stunning collection by a poet whose work recalls the conversational diction of the Beatniks, but with an absolutely contemporary flavor. Known worldwide due to his broad-based internet following (for years, Wallace has posted his poems online almost daily), Wallace has selected more than 70 poems for this collection, presenting a panorama of modern-day Americana. As original Beatnik musician David Amram notes, “Jack Kerouac would have loved him.” This book is heartily recommended to anyone who wants to get a glimpse the possibilities of the American mind in contemporary society: driving, loving, lusting, observing, failing, succeeding, and above all, living and continually seeking the ideal of freedom.

Praise for George Wallace:
“Nitty-gritty, down in hole, Wallace rips life as if it were a piece of paper, leaving the edges jagged and the paper crumpled like so many lives he observes.” —Zvi A. Sesling

“A George Wallace poem is a burst of articulation that carries us into the country of Talk. These poems—brilliant, funny, dangerous, cantankerous—announce the pure pleasure of speaking.” —Jack Foley

“These are poems as rough and vulnerable as manhood, as full of hope and heartbreak as the new world. If you want to know what America feels like in your mouth, read George Wallace out loud.” —Robert Peake

“George Wallace has written the quintessential American book of poetry. The poems in his new book Poppin’ Johnny New American Poems lift off the pages like so many warm-colored hot air balloons in the middle of an Iowa cornfield. And while they glide over the American checkerboard of fields and farms, these poems also hover over the urban streets of American cities where they take in the smells of restaurants brimming with working people as the sun rises, the rough textures of alleys at night and the blue-denimed boys who ride subways, and others who fling fish guts for a living.” —Greenwich Village Gazette.