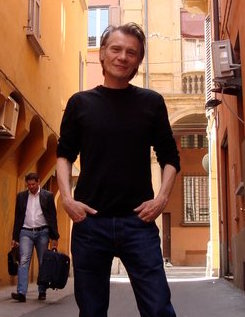 This May, Three Rooms Press is thrilled to be publishing a book Rock & Folk Magazine calls “The best book about the New York Punk Scene”: PUNK AVENUE by Phil Marcade. The book has already generated a lot of pre-publication excitement. New York Rock and American Hardcore author/director Steven Blush calls it “a compelling account of life as an artistic Parisian in Downtown New York, back in the good/bad ol’ days of sex and drugs and rock ‘n’ roll.” And Showgirl Confidential author and longtime scenester Pleasant Gehman calls it “A must-read for anyone interested in a behind-the-scenes glimpse into the nascent Manhattan punk scene… or American rock ‘n’ roll history.”

Marcade’s memoir is hilarious, touching, full of facts, yet also, as James “The Hound” Marshall says, “a fun, fast, nasty read.” Marcade came from Paris to the US in 1972 for “a couple months” and ended up staying for 40 years, landing in NYC in 1975 just as the punk scene was starting to develop. He became the singer of legendary punk blues band The Senders, and was an active member of the Max’s Kansas City and CBGB New York Punk Scene. As Creem managing editor Robert Duncan puts it, “Just when you think you led a fascinating, fun, wild, scary life, along comes this maniac. I’m amazed Phil’s still here. But thankful he managed to make it back with these untoppable tales from the inside of the inside — of his pals Johnny Thunders, Joe Strummer, Debbie Harry, Dee Dee Ramone, of Max’s, CBs and the long-ago Lower East Side, all told in a matter-of-fact style that only makes them more incredible.”

We were happy to be to slow Phil down enough for a conversation about punk rock, technology and what it means to be addicted to music for life.

Phil Marcade: I think of a bunch of real cool kids in New York in 1975, 76. A small group of really interesting young artists and musicians who lived in urban decay. Just hip kids who were basically tired of the same old boring crap on FM radio. They were New York City street-smart visionaries who were sick of the 60s, the hippies and all that. They cut their hair short and wore second-hand black suits from thrift shops. They brought back the 2.30 minutes song formula of the 1950s, getting rid of all the long, boring, pretentious, “virtuoso” nonsense that had been suffocating Rock music in recent years. It was a small local scene. Groups played for each other without any thoughts about commercial success. These were the original punk rockers. Malcolm McLaren came to NY, saw that, was amazed, and brought back that style to his shop in London. What followed in England is, for me, a completely different thing. It certainly began with poor kids rebelling against their terrible social conditions and it was as pure and as great as in New York, but it was quickly taken over by posers. It all got over commercialized, and I lost all interest.

TRP: Is music still an important part of your life? Why?

PM: Yes, very much so. I listen to records every day, or play guitar and sing in my kitchen. I can’t help it! It’s vital. It’s an addiction. But it’s ok, I’ve had worst ones. I collect vintage Rock & Roll vinyl 45s and still discover old obscure gems all the time. I’m also very interested in today’s underground scene. I’m so glad to see that there are many great young bands playing in some cave, somewhere, keeping the flame burning. I think The Daddy Long Legs are one of the best bands in the world, right now. Discovering them was a real thrill.

TRP: Punk Avenue is about a period of time before email, the internet, cell phones, smart phones, CDs and streaming. Do you think technology has had a positive or negative effect on the music scene? Why?

PM: I think the internet had both a positive and negative effect on today’s music scene. Positive because a band can have their music heard in the entire world instead of within three blocks. Negative because without the internet, you were FORCED to go out to find out anything. You had no choice. It was ether that or staying home and watch Mary Tyler Moore on TV!  As a result, kids hung out together more. It’s just not the same, all alone in front of your computer. The worst thing is free downloading, because it makes it very hard for musicians to make a living. I bet a lot of very talented young bands were discouraged by that and gave up to take jobs in offices and banks instead. Dreaming of becoming rich and successful from song writing was a great stimulant for coming up with great songs. Great songs are very important for the quality of our lives. Great song writers should be able to give 100% of their times and energy to their song writing. If they are forced to work a day job to pay their rents because their music is available for free, then we lose out.

PM: I miss it all! Of course, I miss being young too. It’s funny, I think I even miss not knowing where my next meal is coming from, sometimes. For a person like me, arriving in NYC in 1975 was absolutely magical. I was in Heaven. How could I not miss these fabulous times ?  I was so lucky to be where I was, when I was. There is nothing I don’t miss (well, it’s true that I don’t really miss waiting to buy heroin in some abandoned building on Avenue D, but that’s about it!). I’m so glad that I didn’t lose my memory with age, though. I remember everything, and I miss these times so much I actually wrote a book about them!

PM: Each chapter tittle in the book is a song tittle. You could already play all these as you read it. But if you really want to plunge further into the sound of the book, I recommend:

Thanks, Phil! Punk Avenue comes out May 2 and TRP is hosting a big launch party for it at Le Poisson Rouge, New York City. Details to come, but let’s just say you better put it on your calendar now. You will definitely want to be there.