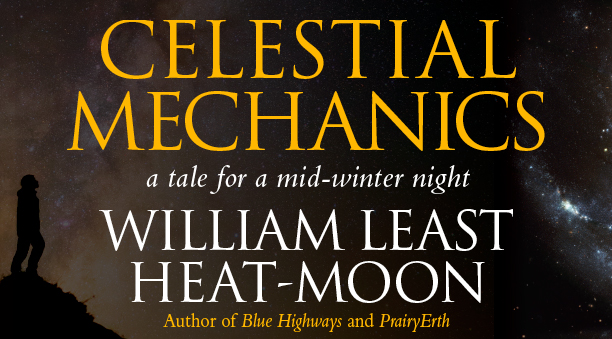 With more than a month left before publication, William Least Heat-Moon’s debut novel has been earning glowing praise from literary critics across the board. Three Rooms Press is thrilled to be publishing this landmark, ethereal, philosophical masterpiece, which will be available for sale April 11.
In CELESTIAL MECHANICS, William Least Heat-Moon embarks on an exploration into the value of knowledge and rational thinking, the essence of being harmoniously alive, and the very nature of the Cosmos. In this novel of haunted love, the protagonist, an amateur astronomer, finds himself in a marriage descending toward darkness until the arrival of his sister-in-law and soon thereafter the appearance of a witching neighbor who may or may not exist. In ways enigmatic, ghostly, and funny, the three women draw him into the equivocal nature of reality and dreams, the threesome’s influences leading the young astronomer on a journey toward something vastly beyond himself. CELESTIAL MECHANICS is a call to a generation wanting to believe rationality and spirituality can fruitfully coexist in a culture threatened by divisions and poisonous “isms.” In a disaffected, disconnected nation that widely ignores the deep implications of both what is within and beyond us–the cosmic worlds revealed by the telescope and the realms opened by the microscope–this tale is a quest for humanity’s deepest links with universe and the ways those ties shape love and meaning.

Critics are enraptured with CELESTIAL MECHANICS. Here’s a sampling of recent remarks:

“CELESTIAL MECHANICS is an entrancing journey toward deeper insight into the cosmos, an exploration readers will share and savor with every masterfully crafted sentence. Highly recommended for fans of Heat-Moon and readers who enjoy philosophical fiction.” —Booklist

AVAILABLE NOW FOR PREORDER AT