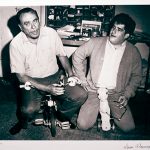 Neeli Cherkovski met Charles Bukowski when he was fifteen years old and Bukowski was already into his forties. Things didn’t go very well. After hearing from a mutual friend about how much Neeli worshipped his work, Bukowski visited him at his parents’ house where the frightened boy could only pretend to be asleep. Author Cherkovski describes the visit in Whitman’s Wild Children:

He walked into my bedroom with my father who said “Wake up, Bukowski is here.” As I got out of bed, before me stood this large man with a ravaged face, broad shoulders and deep penetrating eyes.

“Okay little Rimbaud. I heard you wanted to meet Bukowski, “ he said. Then he looked at the photos of some of the literary heroes on my wall and said, “Jesus, how come there are none of me?”

We went into the living room. I handed Bukowski a handmade book of poems I had written about him. He took one look at it, reading the first few lines, and threw it into the fireplace where my father had made an inferno.

I dove back after the book, managing to save it. Only the fringes were burned.

Bukowski took it from me, saying, “I’ll read your little poem, but no one has ever written about me. I’m sorry, kid.”

Fifteen minutes later, he was in the kitchen trying to make love to my mother. “Come on Clare”, he said. ”I’m more of a man than Sam. Let’s make it.”

And from this began a lifelong friendship. Cherkovski and Bukowski would collaborate a decade later to produce the iconic ’70s ‘zine Laugh Literary and Man the Humping Guns. And near the end of Bukowski’s life, Neeli would memorialize his friend with the biography, Hank, expanded in 1997 to Bukowski, a Life.