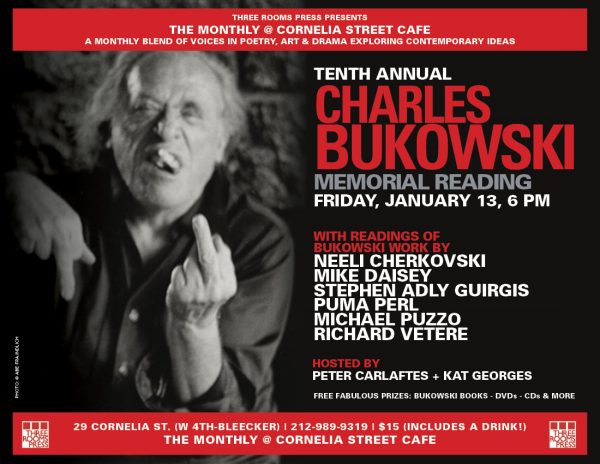 Poet/novelist Charles Bukowski (Post Office, Love is a Dog From Hell) is known as the champion of the outsiders, the lost, the lonely, and the outcasts of society. His work continues to grow in popularity today, with most of his 90+ books still in print.

At the event, performers will explore modern approaches to how Bukowski would interpret today’s world. What would Bukowski think of the election results? Facebook, Snapchat, Instagram, Twitter: Would Bukowski be on social media if he was still around? And how would Bukowski feel about the expanding economic inequality? His poetry resonates with answers.

Doors open at 5:45pm (for best seating please arrive early). All attendees have a chance to win Bukowski books, CDs, DVDs, and other prizes.

Mike Daisey is an American monologist, author, actor and raconteur best known for his extemporaneous monologues about Nikola Tesla, L. Ron Hubbard, Steve Jobs and Apple’s supply chain in China, the Department of Homeland Security, the history of the New York transit system, 9/11, the inventor of the neutron bomb, Wal-Mart and a variety of other topics. His most recent monologue, THE TRUMP CARD about about the rise of Donald Trump, was staged last summer in sold-out theaters.