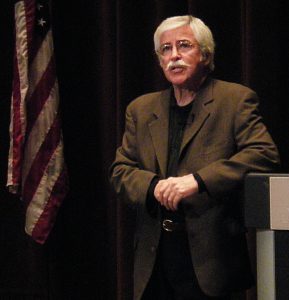 The book was acquired by co-directors Peter Carlaftes and Kat Georges and brokered by David Black Literary Agency. Publication is planned for March 2017.

William Least Heat-Moon’s critically acclaimed bestseller Blue Highways took him across 13,000 miles of country roads, avoiding cities and fast food chains, in search of something greater than himself. That book, which spent 42 weeks on The New York Times Bestseller list, tapped into a collective need and has become a genre-defining classic.

Following another seven works of nonfiction, Heat-Moon’s debut novel Celestial Mechanics takes readers on an even more powerful journey, one that is not just about finding your place in America but about what it means to exist in a universe we struggle to fathom. In essence, it is a Blue Highways of the mind.

“Blue Highways was a major influence on our lives, and Celestial Mechanics shares a lot of the same qualities,” says Georges. Adds Carlaftes, “It is a real honor to be able to work with William Least Heat-Moon and publish this incredible novel.”

For additional information about this book, please contact Peter at peter@threeroomspress.com

About Three Rooms Press
Three Rooms Press is a fierce New York-based independent publisher inspired by dada, punk and passion. Founded in 1993, it serves as a leading independent publisher of cut-the-edge creative, including fiction, memoir, poetry translations, drama and art. Recent titles include This Way to The End Times: Classic Tales of the Apocalypse edited by sci-fi master Robert Silverberg; Full Moon Stages: Personal Notes from 50 Years of the Living Theatre by Living Theatre co-founder Judith Malina, and On Earth and In Hell, the first English translation of the first book of maverick Austrian author Thomas Bernhard. Three Rooms Press books are distributed in the U.S. and internationally by PGW Ingram.