↓
Home→Upcoming Events→060416-060516: Take a Master Class with an internationally-renowned poet, novelist, or memoirist at Czech Center New York
Share This! 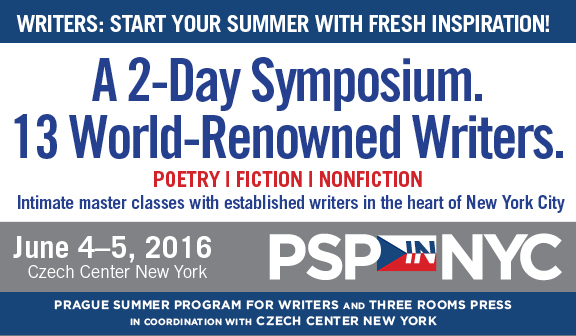 Writers seeking to hone their craft are invited to study with renowned poets, novelists and memoirists at a two-day PSP-in-NYC symposium June 4-5, in the beautifully-renovated Czech Center New York. The symposium will feature intimate master classes, compelling panel discussions and readings, reception with the authors, plus a one-of-a-kind book fair. Sign up for one class, one day, or the entire weekend. Class size is limited; to ensure access to preferred choices of genre and teacher, early registration is recommended.

Presented by The Prague Summer Program for Writers and co-sponsored by New York-based independent publisher Three Rooms Press and Czech Center New York, under the auspices of the Consul General of the Czech Republic Martin Dvořák.

The weekend-long event is an abridged rendition of the more comprehensive, month-long Prague Summer Writing Program, held each July since 1993 in the Czech Republic capital.

Readings, lectures and panel discussions are all free and open to the public. In addition, tickets may be purchased for master classes. Advance registration required. Tickets for master classes available at http://psp-in-nyc.eventbee.com.

Tickets for master classes are limited, and available on a first-come basis. All students who participate in a master class will submit 1-2 writing samples. After completing your registration, please submit your writing samples via email to Richard Katrovas, katrovas@aol.com.

The PSP in NYC lineup (in alphabetical order):

Alison Hawthorne Deming’s most recent nonfiction book is Zoologies: On Animals and the Human Spirit (Milkweed, 2014). She is the author of three additional nonfiction books and five poetry books, most recently Rope (Penguin, 2009) with Stairway to Heaven due out from Penguin this year. Her first book Science and Other Poems won the Walt Whitman Award of the Academy of American Poets. A 2015 Guggenheim Fellowship recipient, she has also received fellowships from the Fine Arts Work Center, the National Endowment for the Arts and the Wallace Stegner Fellowship at Stanford University. Former Director of the UA Poetry Center, she is Agnese Nelms Haury Chair in Environment and Social Justice at the University of Arizona. A faculty member at the Prague Summer Program, she included in her poetry collection Genius Loci a sequence set in Prague, poems fueled by the need to make some balance between the beauty and horror of history. She lives in Tucson, Arizona and Grand Manan, New Brunswick, Canada.

Robert Eversz is the author of six novels that have been translated into 15 languages. His novels have been named to best of year lists at the Washington Post, Oslo Aftenposten, Manchester Guardian, BookPage, and January Magazine. Robert teaches workshops in the novel at the UCLA Extension Writers’ Program, and is a member of the permanent faculty of the Prague Summer Program. One of the country’s most experienced mentors in the pedagogy of writing the novel, he has served as the final judge for the AWP Award Series In the Novel and the Allegra Johnson Prize in Novel Writing, and has been Visiting Professor and Writer in Residence at Western Michigan University.

Beth Ann Fennelly directs the MFA Program at Ole Miss where she was named Outstanding Teacher of the Year. She’s won grants from the N.E.A., United States Artists, and a Fulbright to Brazil. Fennelly has published three books of poetry and one of nonfiction, all with W. W. Norton. Her most recent is The Tilted World, a novel co-authored with her husband, Tom Franklin. They live in Oxford with their three children.

Randy Fertel holds a PhD from Harvard University where he received a teaching award by student vote. He has also taught English at Tulane, LeMoyne College, and the New School for Social Research. His award-winning 2011 memoir, The Gorilla Man and the Empress of Steak, unspools untold tales as he tries to makes sense of his parents – and himself – in a colorful, food-obsessed New Orleans. Novelist Tim O’Brien calls his new book, A Taste for Chaos: The Art of Literary Improvisation, “a stunner of a book – smart, jarring, innovative, witty, provocative, wise, and beautifully written.” Kirkus Reviews called it “A tour de force of reading in the fields of literary theory and history befitting a George Steiner or Erich Auerbach.”

Patricia Hampl’s most recent books, The Florist’s Daughter and Blue Arabesque, were both among The New York Times “100 Notable Books of the Year.” She is the author of four other prose works, and two collections of poetry. Her essays, poems, short fiction, travel pieces and reviews have appeared in The New Yorker, Paris Review, The New York Times, Los Angeles Times, Best American Short Stories, Best American Essays and others. Her new book, The Art of the Wasted Day, will be published by Viking Penguin in 2017. She is a recipient of fellowships from the Guggenheim Foundation and the National Endowment for the Arts (in poetry and in prose). She is a MacArthur Fellow, and is Regents Professor at the University of Minnesota, a member of the permanent faculty of the Prague Summer Program for Writers, and a Visiting Professor at Kingston University-London where she works on writing related to human rights.

Richard Jackson has published over twenty books including thirteen books of poems, most recently Retrievals (C&R Press, 2014), Out of Place (Ashland, 2014), Resonancia (Barcelona, 2014, a translation of Resonance from Ashland, 2010), Half Lives: Petrarchan Poems (Autumn House, 2004), Unauthorized Autobiography: New and Selected Poems (Ashland, 2003), and Heartwall (UMass, Juniper Prize 2000), as well as four chapbook adaptations from Pavese and other Italian poets. His own poems have been translated into seventeen languages including Worlds Apart: Selected Poems in Slovene. He was awarded the Order of Freedom Medal for literary and humanitarian work in the Balkans by the President of Slovenia for his work with the Slovene-based Peace and Sarajevo Committees of PEN International. He has received Guggenheim, NEA, NEH, and two Witter-Bynner fellowships, a Prairie Schooner Reader’s Choice Award, and the Crazyhorse prize. He’s won five Pushcart Prizes and has appeared in Best American Poems ’97 as well as many other anthologies. Originator of VCFA’s Slovenia Program, he was a Fulbright Exchange poet to former Yugoslavia and returns to Europe each year with groups of students. He has been teaching at the Iowa Summer Festival, The Prague Summer Program, and regularly at UT-Chattanooga (since 1976), where he directs the Meacham Writers’ Conference. He has taught at VCFA since 1987. He has won teaching awards at UT-Chattanooga and VCFA. In 2009 he won the AWP George Garret Award for teaching and writing.

Richard Katrovas is founding director of the Prague Summer Program. He is the author of eight collections of poetry, among them Dithyrambs (Carnegie Mellon,1998), Prague Winter (Carnegie Mellon, 2004), Scorpio Rising: Selected Poems (Carnegie Mellon, 2011) and the forthcoming Swastika to Lotus (Carnegie Mellon). He is also the author of a book of short stories, Prague, U.S.A. (Portals, 1997); a memoir, The Republic of Burma Shave (Carnegie Mellon, 2001); a novel, Mystic Pig (Smallmouth, 2001, Oleander, 2008); and the “anecdotal memoir” The Years of Smashing Bricks (Carnegie Mellon, 2007). His most recent book is the memoir-in-essays Raising Girls in Bohemia: Meditations of an American Father (Three Room Press, New York: 2014). His poems, essays and stories have appeared widely, and won numerous grants and awards. He was editor for Ten Years After the Velvet Revolution: Voices from the Czech Republic (New Orleans Review, Special Double Issue, Spring, 2000). Katrovas witnessed the Velvet Revolution on a Fulbright in 1989, and has been a resident of Prague with his three daughters and yogini wife for much of each year since. He taught for the University of New Orleans for twenty years, and joined the faculty of Western Michigan University in the fall of 2002.

Anne Marie Macari is the author of four books of poetry, including Red Deer (Persea Books, 2015) and She Heads Into the Wilderness (Autumn House, 2008). In 2000 Macari won the APR/Honickman first book prize for Ivory Cradle, which was followed by Gloryland (Alice James Books, 2005). She has also coedited, with Carey Salerno, Lit From Inside: 40 Years of Poetry From Alice James Books.

Christopher Merrill has published six collections of poetry, including Watch Fire, for which he received the Lavan Younger Poets Award from the Academy of American Poets; many edited volumes and books of translations; and five works of nonfiction, among them, Only the Nails Remain: Scenes from the Balkan Wars and Things of the Hidden God: Journey to the Holy Mountain. His latest prose book, The Tree of the Doves: Ceremony, Expedition, War, chronicles travels in Malaysia, China and Mongolia, and the Middle East. His writings have been translated into nearly forty languages; his journalism appears widely; his honors include a Chevalier from the French government in the Order of Arts and Letters. As director of the International Writing Program at the University of Iowa, Merrill has conducted cultural diplomacy missions to more than fifty countries. He serves on the U.S. National Commission for UNESCO, and in April 2012 President Obama appointed him to the National Council on the Humanities.

Stanley Plumly’s most recent book of poems is Orphan Hours (W.W. Norton, 2012). His collection, Old Heart, won the Los Angeles Times Book Prize and the Paterson Poetry Prize and was a finalist for the National Book Award. His Posthumous Keats: A Personal Biography was runner-up for the PEN/Jacqueline Bograd Weld Award for Distinguished Biography. His most recent book of prose, The Immortal Evening: A Legendary Dinner with Keats, Wordsworth, and Lamb W.W. Norton, 2014), won the 2015 Truman Capote Prize for Literary Criticism, administered by the University of Iowa’s Writers’ Workshop. Plumly is a Distinguished University Professor at the University of Maryland. In 2010 he was elected to membership in the American Academy of Arts and Sciences.

Gerald Stern was born in Pittsburgh, Pennsylvania in 1925 and was educated at the University of Pittsburgh and Columbia University. He is the author of 16 books of poetry, including, most recently, Divine Nothingness (Norton, 2014) and In Beauty Bright (Norton, 2012), as well as This Time: New and Selected Poems, which won the 1998 National Book Award. A kind-of memoir of a year in 85 sections titled Stealing History, was published by Trinity University Press in 2012. Stern was awarded the 2005 Wallace Stevens Award by the Academy of American Poets, was the 2010 recipient of the Medal of Honor in Poetry by the American Academy of Arts and Letters; he was inducted into the 2012 class of the American Academy of Arts and Sciences and was the 2012 recipient of the Rebekah Johnson Bobbitt National Prize for Poetry from the Library of Congress. He was the 2014 winner of the Frost Medal.