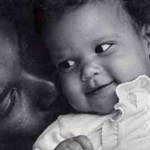 On October 28, 2015 I woke up feeling incredibly ill. I think it was my mind’s way of telling my body to stay in bed. The power of the mind is great, yet the power of Egyptian cotton can be even greater. If I rose from my sheets, the elusive San Quentin gates would open for me. For the first time I would visit the place where my father spent a great deal of his life and where his close friend, my uncle George Jackson (Soledad Brother) was murdered. My fear on this day was palpable; I had been waiting for it for forty-four years. Yet now, I didn’t want to go. I was paralyzed by dread.

The prime piece of California real estate known San Quentin is one-hundred sixty-four years old. It houses California’s only Death Row facility—the largest in the United States. San Quentin or Q as my dad referred to it, is designed to hold 3,082 inmates but is currently home to 4,223 incarcerated souls. As a child I referred to it as my dad’s house.

As one crosses the Richmond Bridge on the way to wine tastings in Napa or a mud bath in Calistoga, it’s easy to regard San Quentin with admiration. It is a beachfront property perched on the San Francisco Bay worth hundreds of millions of dollars. It is situated just minutes from some of the most expensive homes and communities in the world. Looking out at the vista while standing under the gun tower that looms above the parking lot, you can almost picture Steve Perry singing “When the lights go down in the city . . .” or Otis sitting on the dock of the bay—until you turn around and remember where you are.

Yet every time I have passed this building, I have felt the weight and horror of what really happens within those walls . . . what happened to my father there . . . what he had to do to ­survive in Q . . . what is currently happening to countless other children’s fathers within those prison walls. I always find myself resenting Q for keeping my father from me during the beginning of my life. And I’m struck with a certain melancholy knowing that so little has changed. One in fourteen American children has a parent in prison: herein lies one of the deepest issues facing the future of our country.

I started my first visit to San Quentin in the warden’s office, accompanied by my friend, a state senator in charge of designating and distributing funding for state prisons. Not surprisingly, the warden was lovely to us. I looked around his office and couldn’t help but think, if my dad could see me now. It was surreal. After chewing the fat with the warden (we actually talked about the silk socks his wife had given him) we started our prison tour.

We passed through several identification checks, gates, and metal detectors, then stepped into the sunny yard. I was fighting back tears and had a lump in my throat. I couldn’t swallow. Here I was, looking at the same granite blocks my father used to look at, walking on the same pavement he had once tread on. Little had changed at San Quentin since his time there. All the buildings he and George Jackson wrote about were still standing. My father’s and George’s words were jumping off the pages of their letters into reality. So that’s the gym where my dad pretended he was gonna let an old guy suck his dick and stabbed him instead for his Q initiation. I peered into his very cell block. So this is where he mixed moonshine in the toilet, sniffed glue and somehow amidst it all started planning a revolution.

Out in the yard, inmates exercised freely. These men knew that America now had a black president. They were snacking, reading, and working out. I even saw one inmate feeding some seagulls part of his lunch. This is the yard, those are the gun towers, I thought, looking up. Men with rifles were up there. I scoured the ground, trying to imagine the very spot where my uncle George would have fallen, knowing that this was where he was murdered. No headstones here. Just blood, somewhere beneath the surface.

There is a new flock of men at Q now. There are new revolutionaries and old revolutionaries. Some of them are high. Some are sober. Some are conscious. And some don’t give a fuck. Just like on the outside.

We visited the computer lab where inmates who had been confined less than an hour from Silicon Valley’s booming technology are learning two kinds of coding. There I met a handsome man from San Jose who was the same age as me, but had been incarcerated for much of the technological revolution. Still, he was excited to tell me that Mark Zuckerberg had visited the week before. “When do you get out?” I asked him. “Seventeen years . . . ” he said. I couldn’t help but think that the coding he was learning would be obsolete by the time he hit the streets.

We visited the home of the San Quentin News, a newspaper where convicts write, design, and print the paper. Inmates were eager to share copies of their latest edition which detailed stories about the Zuckerberg visit, the Prison University Project Graduation, and the recent visit and game between the Golden State Warriors and their very own San Quentin Warriors. I met an inmate who had been in for twenty-two years. He was excited to show me his “e-reader.” He was overwhelmed by its touch screen and that fact that he could access several books on it. It was a slow tablet in a clear case like all prison electronics (they do that so you can’t hide contraband in them), He used it to help earn college credits. “You have to remember I’ve been in here twenty-two years. I’ve never even had a cell phone,” he told me.

San Quentin’s Death Row houses more than seven hundred inmates. The senator and I walked through the condemned yard and viewed the men in cages. They were showering, shitting on toilets, playing basketball and games in the sunlight.

We spoke to several of the inmates and asked them their opinion of the death penalty. Surprisingly, many of the men said they supported it. Condemned men had their own cells and were each assigned legal counsel. Serving time on Death Row was actually somewhat more palatable than serving time with the general population, according to some men.
California hasn’t ­executed anyone since 2006. But in terms of prison reform, we have such a long way to go.

My father’s best friend, George Jackson, called himself Geo. He arranged for my mom and dad to be introduced, and, when my mother became pregnant, my dad assumed he would have a son and name him after George. This was the plan, but George was murdered in Q two weeks before I was born. My dad changed. He had lost his best friend, mentor and confidant and he knew he had to step up and try to fill George’s enormous shoes.

I think my father wanted me to be a boy because he thought I could more easily fend for myself. But if you ask the parents of Trayvon Martin, Oscar Grant, or Michael Brown, they would hardly agree. And, certainly, being an African-American boy did not make my father’s life easier. He burned his school down when he was nine years old. He didn’t do it because he was a bad child. He did it because he was angry, because he was human, it was a reaction to the inhumane racism that he was subjected to by his so-called teachers because of his black skin. When my father was nine he faced his first incarceration at the Alexander Boys Home. By the time he was fifteen, he was locked up in a federal prison, charged as an adult.

Black men have the inalienable right in this country to be angry. How can they not be? The system is stacked up against them from the moment they’re born. In the ­forty-four years since my father was murdered, the United States would appear to have made some progress in the area of racial equality. But in that same period, the prison population has quintupled. According to the NAACP, African Americans are now incarcerated at nearly six times the rate of Caucasians. Statistically one in three black men can expect to go to jail in their lifetime. One in thirteen black adults can’t vote because of their criminal records. In her stunning book, The New Jim Crow, Michelle Alexander argues that Jim Crow and slavery were caste systems, and that our current system of mass incarceration is also a caste system. The chain remains and the shoes are left to fill.

My dad wanted me to be a boy. However, when I was born, my dad was in County for a parole violation and was unable to be at the hospital. The nurse handed me to my mom and she took one look at me and named me George. The nurse told her I was far too pretty of a little girl to be named George so she came up with Gea. My middle name is Attica Jackson. I was born on the day of the prison riots in Attica where one thousand inmates took control of the prison in New York. My name carries as much weight as the blood that runs in my veins and the ghosts that haunt me.
I’m not sure what to do with all of this weight and this lump in my throat that just won’t go down.

On the day I was born, my father wrote a letter to my mother that gives me hope for the future.

As I think of the child, I can’t help but think of Geo and the life we as brothers used to dream of, and said we would have. We decided long ago to negate our individuality, for only thus is it possible to serve those whom you claim to represent. A movement must never center around one or a group of people, for if it does, at that point it marks itself for its very doom . . .

It’s to this pledge that we dedicated ourselves back in 1960, and it has been eleven years now; looking back over my shoulder, I can see some good that has been done, but when I look to the forefront of the struggle, I see a sinister monster, that is capitalism. I see dollar-hands exchanging, heads rolling, and dust flying, which only indicates to me that there is a terrible lot to strive for, and therefore it shall be to the future that my eyes shall be cast—but with an occasional look over the shoulder, to witness the destruction of the people’s enemies and the erection of the new.

I love you and baby Gea Jackson Carr. Power, love, caresses, and a thousand kisses,

Tell the people thanks.