↓
Home→Essays→the metaphysical mortician
(how william s. burroughs effected the way we think / act / write in the 21st century)
Share This! 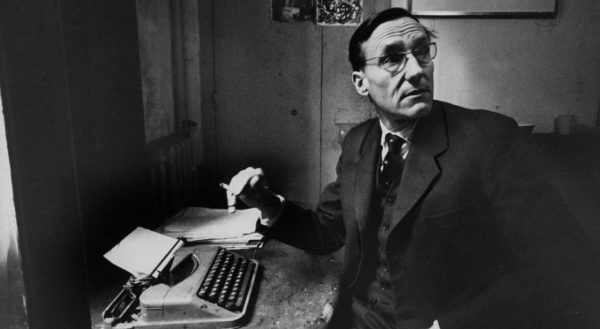 Death says it all. Permission gives us license. What W.S.B. gave us was the permission to deal with our innards, structurally, spiritually, metaphysically, psychically, but most importantly OUTWARDLY. We are awash with psychosis and thats o.k. We are wild boys allowed to think, be, act freely while dosing ourselves with pleasure and defiance. We can deal with sexuality and anti-sexuality freely. Not be afraid to put on paper or in practice (im)permanent belief systems that border on the perverse, that inflict pain yet calm us with their frantic morphin(e)g. hetero / non-hetero / anti-hetero / viral / anti-viral nakedness. Like the Marquis de Sade Burroughs was censored and fought that censorship to free the word and to push forward our rights to speak our minds out loud and in print. To be and think as alien as we want, open and widen frontiers and metaphorically and perhaps actually eat shit, fornicate with beasts and penetrate the mainstream by confronting it with its own horrors. Like Sade he used pornography as a tool to express freedom and expose the gang-banging political and social injustices.

Burroughs about Naked Lunch:
“Certain passages in the book that have been called pornographic were written as a tract against Capital Punishment. These sections are intended to reveal capital punishment as the obscene, barbaric and disgusting anachronism that it is”.”
And like Sade his actions and thoughts to some extent were that of a libertine.

He gave us permission to dispense with hierarchies and to have the ability to not fear our SEX and to speak horrible beauty about our bodies and others. To question, rebel against and revel in detention. To be aware of surveillance and know as we knew back in the last century that paranoia is real. That we sense it, smell it touch it, see it just as we see the clear illusion of a glowing moon and are fooled into thinking it shines of its own accord. W.S.B. s writing has allowed us to be corrupt and to expose the corrupt forces that connect us to and disconnect us from the real world and oft times ourselves. He proved that language truly is a virus and that if it falls into the wrong hands (government, politicos, lobbyists, tyrants) it can infect and kill us all and these aspects have come to light more freely in the writing of the younger generations who have learned to use these tools more and more to defend our rights against oppressive puritanical thoughts and ideals. He germinated the idea of germ warfare real and imagined in the super depths of the post-surrealist mind. With Gysin he revitalized, galvanized and help release artists from linearity by delving deeper into chance and randomness through the cut-up method. He gave dignity to the suit and tie. He gave us permission to make and transcend mistakes. To deal simultaneously with the present and what I refer to as future/past.

As an artist he constantly made us aware of the horrors perpetuated on individuals both singularly and collectively and helped heighten and reveal a higher collective consciousness / freedom of expression and the freedom to exercise/exorcise our inner most horrors / demons / excrement that exude / excrete / from the fluids of our beings both emotional and physical.  He re-created the  outer shell transforming it into animal/insect beyond Kafkas giant BUG and took us many steps further into the world of CHANGE. He personified, affirmed and rejected drug culture all in one embodiment. He gave us license to be possessed and to use that possession to attain new frontiers. He brought so-called pornography into the high realm of literature as many after him have profited by. He has in his own words written about what is in front of his senses at the moment of writing; as with Kerouac’s spontaneous prose and has helped free what he terms the psychic process teaching us that writing is not about entertaining but about searching and revealing.

He chained us to the page then made us search for the keys of escape.