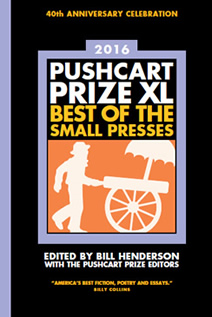 Three Rooms Press is pleased to announce the nominees for the Pushcart Prize for work published in 2015. Since 1976, hundreds of presses and thousands of writers of short stories, poetry and essays have been represented in this noted annual collection. And the nominees are:

Congratulations to all the nominees and best of luck!