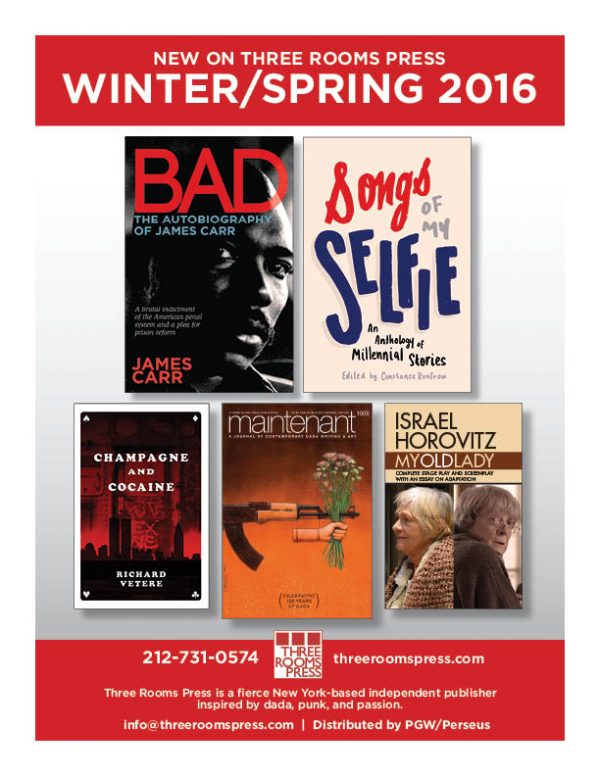 We’ve put the finishing touches on our Spring 2016 catalog and we cannot wait to share this great new titles with you. Richard Vetere and Israel Horovitz are back with their newest works, as in Maintenant—the anniversary issue! And debuting the gripping autobiography of James Carr, and seventeen millennial writers.  If you’d like to request an ARC for a review, a blurb, events, sales, etc., reach out to us at info@threeroomspress.com. You can download a pdf of our catalog here.

BAD: The Autobiography of James Carr
By James Carr

A brand new edition of the harrowingly brutal and unapologetic 1972 autobiography by James Carr, a notorious African-American career criminal who went straight out of Compton to a reformatory after burning down his school at the age of 10. A brutal indictment of the American penal system and a primer for the seeds of institutionalized racism in this country, Bad goes where no other book has ever gone before and so did James Carr. After years in and out of prison (mostly in) Carr wound up bunking with George Jackson (Soledad Brother) in Folsom Prison where they fought their way to a position of strength along the radical stream of the 1960s. As Carr notes, “I’ve been struggling all my life to get beyond the choice of living on my knees or dying on my feet. It’s time we lived on our feet.” A book that strips the system bare, Carr’s memoir is revealing as a part of Black Panther history, and as a telling document in the battle for prison reform that continues to this day.

SONGS OF MY SELFIE: An Anthology of Millennial Writers
Edited by Constance Renfrow

SONGS OF MY SELFIE: An Anthology of Millennial Stories celebrates the millennial through the works of up-and-coming fiction writers, all under the age of twenty-six. This collection features seventeen short stories by millennial writers about actual millennial issues, exposing this generation’s true ambitions and frustrations, humor and heartbreak, despair and joie de vivre.

With fresh new voices and edgy prose, these compelling stories offer a cross-section of vibrant millennial characters: unemployed grads deep in debt, expectant mothers on the cusp of adulthood, online relationship addicts, and millennials at war with their families’ expectations—even while stuck living at home. Here are the strong and the weak, the self-aware and those who reject reality—all carefully crafted to buck the common perception of the millennial. And yet, with a knowing wink, each story is accompanied by a selfie of its author. Forget what the media says—SONGS OF MY SELFIE reveals what it really means to be twenty-something in today.

CHAMPAGNE AND COCAINE: A Novel
By Richard Vetere

In early-eighties New York, Danny Ferraro is living “the life”: late-night discos, call girls, and cocaine between pick-up games across the city. But it all comes crashing down when his luck runs out and he finds himself in debt to the mob. One thing leads to another, forcing him to sink deeper and deeper while trying to pull himself out of his increasingly deviant world. But caught in the middle of a bitter dispute, he finds himself forced to commit an unspeakable act to get out of the hole before one side starts shoveling dirt into it.

MY OLD LADY: Complete Stage Play and Screenplay with an Essay on Adaptation
By Israel Horovitz

Famed playwright Israel Horovitz has written more than seventy produced plays, which have been translated in more than thirty languages worldwide. Now he shares tips and techniques on adapting plays for the screen. The book includes the full script of both the play version and screenplay of My Old Lady, along with an in-depth analysis by Horovitz of the challenges of adapting stage work for the screen. He discusses what inspired him to consider adapting the play in the first place, and his diligent efforts to distill the essence of the play without making “exactly the kind of movie I dislike.” A compelling guide for both cinematic students and anyone interested in the creative process.

MAINTENANT 10: A Journal of Contemporary Dada Writing and Art
Edited by Peter Carlaftes and Kat Georges

The spirit of Dada continues to thrive in this stunning annual collection of provocative and disruptive Dada-inspired art and writing culled from a plethora of top international contributors, with more than fifty color images. Maintenant 10: A Journal of Contemporary Dada Writing and Art is the latest edition of an annual collection of contemporary Dada work inspired by Dada instigator and Three Rooms Press spiritual advisor Arthur Cravan. This year’s theme, “Warm/Hunger,” features art and writing dealing with the alarming increase in global warming and increased tensions from international conflict. It features work by a wide range of internationally renowned Dada artist and writers.