↓
Home→Overview→2015: Reflections on a Golden Year 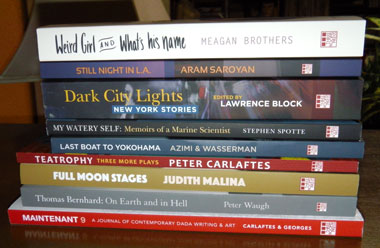 It’s been a distinctive year at Three Rooms Press, and as 2015 winds to a close, it’s thrilling to look back at what we’ve accomplished. The year saw us launching nine extraordinary books, and hosting events in four countries and multiple states here in the U.S. Here’s a look back at some highlights. Enjoy!

JANUARY: The year started off with The 8th Annual Charles Bukowski Memorial Reading at Cornelia Street Cafe where extraordinary poet and novelist Kim Addonizio (Bukowski in a Sundress) and friends tore it up to a packed house.

FEBRUARY began with a inspiring BURROUGHS 101 night with Performance Artists Anne Waldman and Penny Ardcade paying tribute to William S Burroughs. The month ended with the publication of my own book TEATROPHY: Three More Plays culminating in a production of my play ANTI starring Eloise Eonnet, Olivia Jampol, and Laura Betz –and directed by Kat Georges at the Barrow Street Theatre. What a great night for yours truly.

MARCH brought Kat and I down to the warm clime of Longboat Key, Florida for the launch of Stephen Spotte‘s notable memoir MY WATERY SELF: Memoirs of a Marine Scientist at the Mote Marine Laboratory. Spotte generously agreed that his home would become the new headquarters of Three Rooms Press South during the winter months.

APRIL took 3RP out to the West Coast for our Fall Book presentation pitch in Berkely to our dynamic and brilliant  PGW sales team. Then it was up to Minneapolis/St. Paul where 3RP’s booth made us a lot of friends our first time taking part in AWP.  I even made a special appearance onstage with the legendary songster Grant Hart at an event sponsored by Rain Taxi.

MAY began with the launch of DARK CITY LIGHTS: New York Stories at Otto Penzler’s fabulous Mysterious Bookshop on Warren in NYC, with editor and mystery master Lawrence Block and 17 contributors from the anthology under one roof: Mr. Block, his daughter Jill, Kat & I, David Levien, Brian Koppelman, Jim Fusilli, Erin Mitchell, Annette Meyers, SJ Rozan, Parnell Hall, Jane Dentinger, Ed Park, Jerrold Mundis. Tom Callahan, Peter Hochstein, Thomas Pluck, and Jonathan Santlofer.  And there was also a reading by Warren Moore in Newberry, SC and by Mother & Daughter Elaine & Eve Kagan in Fredericksburg, VA to celebrate the release of DARK CITY LIGHTS. What an honor for Three Rooms Press to publish each and all under our banner. The only author left out here from our 23-story Anthology is Robert Silverberg. But don’t worry. You’ll be hearing more about him from 3RP in the Fall of 2016.

LATER IN MAY we welcomed Japan-based authors Nassrine Azimi and Michel Wasserman to NYC for the American launch events for their incisive biography LAST BOAT TO YOKOHAMA: The Life and Legacy of Beate Sirota Gordon. In addition to a moving launch at Cornelia Street Cafe, Three Rooms Press hosted a spectacular evening at the Rubin Museum in honor of the book, which was capped off by an incredible dance installation piece by legendary dance/performance artist Eiko Otake. A big shout to Beate’s daughter Nicole A. Gordon and son Geoffrey Paul Gordon for their capable assistance with this project.

JUNE is DADA Month at 3RP and the release of MAINTENANT 9: A Journal of Contemporary Dada Writing and Art–for the first time in full color–was monumental. Two big NYC launches at Cornelia Street Cafe and Le Poisson Rouge and then at Beyond Baroque in Venice, CA were mad fun with over 20 contributors performing at each. Flash forward to September: Kat & I put together the first London Dada Launch at VFD on September 5 with 12 contributors presenting their work. On September 8, we hosted our 3rd annual Paris Dada show at Au Chat Noir with 12 more contributors on hand. And from September 10-13, we were part of the four-day 2nd annual  Brussels International Underground Poetry Festival curated by MAINTENANT contributor Philip Meersman and co-sponsored by Three Rooms Press. And in November we even were able to get one more Dada send off in San Francisco with DADA DO: SF on November 22 at Specs in North Beach. (Heads up: In November 2016, 3RP and MAINTENANT 10(0) will be featured in the City Lights Dada Centennial Festival–a big honor indeed!).

In AUGUST, in between all of that Dada, Kat and I were able to visit with Israel Horovitz in Gloucester, MA in August and attend his packed reading from HEAVEN and Other Poems at the Sawyer Free Library. Israel then did it solo in his hometown of Wakefield, MA to another full house. Keep an eye out for our first release of 2016 –MY OLD LADY: Complete Stage Play, Screenplay, and Essay on Adaptation by Israel Horovitz. Later in August, 3RP trekked up to our annual writers retreat in Biddeford, ME, where we found met with 3RP author Michael T. Fournier and discussed provocative literature and DADA with famed MIT editor Roger Conover.

SEPTEMBER saw 3RP dynamo Constance Renfrow hosting her first Monthly event, “Who Wants to Be a Millennial?” which featured a range of young authors including several from the forthcoming 3RP release SONGS OF MY SELFIE: An Anthology of Millennial Stories. And we hightailed it back from our European DADA tour to a thrilling time at the annual Brooklyn Book Festival, with LGBT YA author Meagan Brothers making her debut signing of WEIRD GIRL AND WHAT’S HIS NAME.

OCTOBER saw the official launch of WEIRD GIRL AND WHAT’S HIS NAME with fun events at Cornelia Street Cafe and Peekskill’s Oblong Books. In between, we hustled out to L.A. for the October 13 launch of Aram Saroyan’s remarkable minimalist detective novel STILL NIGHT IN L.A. at Los Feliz’s Skylight Books. The next night, October 14, we launched FULL MOON STAGES: Personal Notes from 50 Years of The Living Theatre at a touching memorial at Beyond Baroque for author Judith Malina (who had sadly passed away back in April). The event was hosted and organized by BB’s Richard Modiano. Back on the East Coast, we held the NYC launch for FULL MOON STAGES at Le Poisson Rouge. Special thanks to Living Theatre members Brad Burgess, Tom Walker, Leah Bachar, Joanie Hieger Fritz, and Lois Kagan Mingus for helping this come together.

NOVEMBER brought the launch of our final release of 2015, ON EARTH AND IN HELL: Early Poems by Thomas Bernhard, translated by Peter Waugh. This marks the first-ever English translation of the maverick Austrian author’s first book, and it was quite a fulfilling project. The Cornelia Street Cafe launch on November 12 was supported by the Austrian Cultural Forum and featured a number of passionate Bernhard scholars and aficianados.

In DECEMBER, we’ll wrap up this marvelous year with our 3rd Annual PROSE! POETRY! PARTY! at Cornelia Street Cafe on Friday December 4. Please join us. And then we’ll kick off the new year 2016 with our 9th Annual CHARLES BUKOWSKI Memorial Reading on Friday January 8 (same time and place).

Thank you for your ongoing support. Here’s hoping all of you are looking forward to reading our coming titles for Spring and Fall 2016 seasons as much as we at Three Rooms Press look forward to putting them out in the world.