↓
Home→The Monthly at Cornelia Street Cafe→11/12/15: A Tribute to Thomas Bernhard and the Launch of ON EARTH AND IN HELL 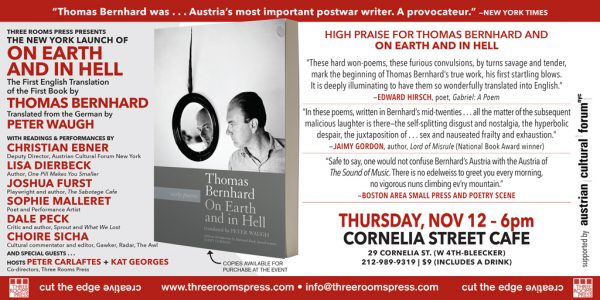 Three Rooms Press, with the support of the The Austrian Cultural Forum, presents an evening of readings of the work of maverick Austrian author Thomas Bernhard, celebrating the release of the first English translation of his first book, ON EARTH AND IN HELL (ISBN 978-1-94110-23-2, Three Rooms Press, bilingual (German-English), November 2015, 224 pages), which poet Edward Hirsch describes as “furious convulsions, by turns savage and tender [that] mark the beginning of Thomas Bernhard’s true work, his first startling blows.”

The evening will include readings by several noteworthy Bernhard afficianados including  author and cultural commentator Dale Peck (The Law of Enclosures; What We Lost); novelist and nonfiction author Lisa Dierbeck (The Autobiography of Jenny X and New York Times Notable Book One Pill Makes You Smaller); award-winning novelist and playwright Joshua Furst (The Sabotage Cafe); poet and performance artist Sophie Malleret, and cultural commentator and editor Choire Sicha (Gawker, Radar, The Awl). Additional guest readers to be announced.

Copies of ON EARTH AND IN HELL will be available for purchase and signing at the event.

The event takes place on Thursday, November 12, at 6 pm at Cornelia Street Cafe, 29 Cornelia Street (between W. 4th and Bleecker). Admission is $9, which includes a free drink. Additional information: http://corneliastreetcafe.com or email info@threeroomspress.com

Praise for ON EARTH AND IN HELL and THOMAS BERHARD:
“These hard won-poems, these furious convulsions, by turns savage and tender, mark the beginning of Thomas Bernhard’s true work, his first startling blows. It is deeply illuminating to have them so wonderfully translated into English.” —Edward Hirsch, poet, Gabriel: A Poem; How to Read a Poem (and Fall in Love with Poetry)

“[In] this full version of ON EARTH AND IN HELL, Thomas Bernhardt’s very first publication, in 1957, as a poet and, more importantly, as a writer … [is] a hypersensitive stranger, leading me through a heart-wrenching journey, circles of hell punctuated with spring beams and unexpected bubbles of tenderness. A soul exposed to the very core, explosive.” —from the Foreword by Barbara Hutt, co-author, Thomas Bernhard

“In these poems, written in Bernhard’s mid-twenties . . . all the matter of the subsequent malicious laughter is there—the self-splitting disgust and nostalgia, the hyperbolic despair, the failed (desired but also scorned) glory, the juxtaposition of village idyll and doom, of scathing superiority and terminal degradation, of sex, and nauseated frailty and exhaustion.” —from the introduction by Jaimy Gordon, author, Lord of Misrule (National Book Award winner)

“Bernhard was . . . Austria’s most important postwar writer, a provocateur who delighted in finding his country and countrymen odious and then making the best of it in his art.” The New York Times

ABOUT THOMAS BERNHARD
Thomas Bernhard (1931–1989) was an Austrian playwright, novelist, and poet. His body of work was cited in a New York Times book review as “the most significant literary achievement since World War II.” He is widely considered one of the most innovative and original authors of the twentieth century and often associated with fellow mavericks Beckett, Kafka and Dostoevsky.

ABOUT PETER WAUGH, TRANSLATOR
Peter Waugh is a poet, translator and editor, born in Barnet, London in 1956. He is co-editor of subdream the Vienna Journal of English Language Poetry, and publisher of Labyrinth poetry books. He studied with Allen Ginsberg, Ann Waldman, Jackson Mac Low, Ed Sanders, Andrew Schelling, Blixa Bargeld, Andrei Bitov, Henri Chopin and others. His poetry has appeared in anthologies and magazines in England, the U.S.A., Austria, Slovakia, Macedonia and Croatia, as well as in the chapbooks Horizon Firelight (2000) and Haiku Butterfly Death Dream (2002). He is a member of Übersetzergemeinschaft literarischer und wissenschaftlicher Werke (Austrian Society of Literary and Academic Translators) and his highly-respected translations include the bilingual German-English volumes Terminal by Klara Köttner-Benigni and Standpoints by Edith Sommer. He lives in Vienna.