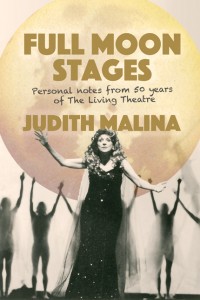 As cofounder of the internationally-known, highly-controversial radical political troupe, The Living Theater, author Judith Malina is one of the leading female countercultural figures of the 50s, 60s, 70s and beyond. In FULL MOON STAGES: Personal Notes from 50 Years of the Living Theatre (Three Rooms Press Trade Paperback Original; November 10, 2015; $18.95, 978-1-941110-25-6), Malina creates an intimate memoir in a unique format with a collection of personal notes written on every full moon for fifty years from 1964 to 2014.

These never-before-published notes reveal her most private thoughts and inform the reader about Living Theatre activities as they wound their way from New York City to Italy, France, Belgium, Germany and Brazil, developing a nomadic series of notable performances of such groundbreaking underground classics as The Brig, The Connection, and Paradise Now. Malina is relentless in her commitment to the full moon schedule, writing regardless of her current life circumstance. Notes issue forth from hotels, trains—even prison—shedding light on the consequences of holding true to her code of the theatrical expression of her anarchist-pacifist principles.

The format of the book offers a sense of immediacy while revealing a twentieth century history of the counterculture. In addition, the book includes 50 rare historical photos from Living Theatre performances and Malina’s personal life.