↓
Home→Contests→Book Giveaway: Advance Reader Copy of Thomas Bernhard’s ON EARTH AND IN HELL 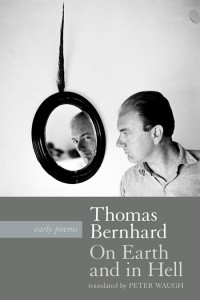 ON EARTH AND IN HELL (Three Rooms Press Trade Paperback Original; November 10, 2015; $19.95, 978-1-941110-23-2) is the first English translation of the earliest poetry of brilliant and disruptive Austrian writer Thomas Bernhard, widely considered one of the most innovative and original authors of the twentieth century and often associated with fellow mavericks Beckett, Kafka and Dostoevsky.

A master of language, whose body of work was described in a New York Times book review as “the most significant literary achievement since World War II,” Bernhard’s ON EARTH AND IN HELL offers a distilled perspective on the essence of his artistry and his theme of death as the only reality. A remarkable achievement by highly-respected translator Peter Waugh.

Three Rooms Press is giving away FIVE Advance Reader Copies of ON EARTH AND IN HELL via Goodreads. Deadline to enter: August 30, 2015.

Praise for Thomas Bernhard and ON EARTH AND IN HELL
“Austria’s most important postwar writer.” —New York Times
“Bernhard fashions an original angle of vision that transforms our understanding. We see elephants beside us in a room where no one mentions elephants.” —The Oprah Magazine
“While Thomas Bernhard’s early works of poetry are relatively unknown, they show the ingenious beginnings of the author’s ironic and morbid vision.” —Matthias Konzett, author of Rhetoric of The National Dissent in Thomas Bernhard,
Peter Handke and Elfriede Jelinek
“Astonishingly original, a composition of strange new beauty.” —The Nation

On Earth and in Hell