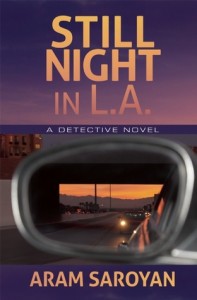 People are raving about Aram Saroyan’s Still Night in L.A., the new detective novel releasing this fall on 3RP, and we couldn’t be more thrilled!

Still Night in L.A. begins when Michael Shepard, a detective with his own set of problems, is hired one morning by a fashionable young woman at her Hollywood apartment. Soon he’s embroiled in a murder investigation that may shed light on a nearly forgotten tragedy. A divorced father wondering how to set his son on a better course in life, the detective gets into deepening trouble as he negotiates a vivid panorama of the town’s modern-day beautiful and damned. Author Aram Saroyan harnesses the hardboiled styles of Chandler, Hammett, and Ross MacDonald into a contemporary tale of information age intrigue. The text is supplemented with cell phone photos taken by Saroyan in the same environs in which the story unfolds.

What people are saying:

“Readers of California-dream-correction fiction may have their particular favorites—Day of the Locust, The Slide Area, I Should Have Stayed Home, My Face for the World To See, The Long Goodbye. Aram Saroyan’s Still Night in L.A. brings long experience and practiced narrative craft to earn his place in this line.” —Tom Clark, author of The Exile of Celine

“STILL NIGHT IN L.A. is a novel where the magic is all in the language, in the evocation of the detective’s incongruously sweet and gentle personality, and in his astoundingly accurate takes on a world where kids have a hard time growing up before they hit middle age, and where the hard thing is not to become a movie star but to get someone to remember your name.”—Gerald Nicosia, author, Home to War: The Untold Story of the Vietnam Veterans’ Movement

“STILL NIGHT IN L.A. moves mysteriously through the late American day and ends up inscrutably in the lost hour of the early morning. In between, crazy humans reign supreme. Aram Saroyan’s  prose is as elegant as emeralds and ice.” —G. A. Hausman, author, The Mythology of Horses

Aram Saroyan’s STILL NIGHT IN L.A. cruises the mean streets and trendy brunch boites of Los Angeles, this city of angels and psychopaths. His shamus Michael Shepard is a Marlowe for our digital times. —Richard Setlowe, author of The Haunting of Suzanna Blackwell