↓
Home→reviews→Brilliant Article on Beate Sirota Gordon and Last Boat to Yokohama in The Japan Times
Share This! 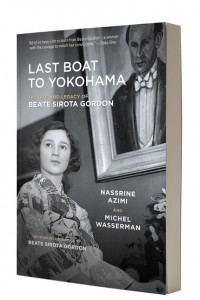 LAST BOAT TO YOKOHAMA: The Life and Legacy of Beate Sirota Gordon, by Nassrine Azimi and Michel Wasserman, continues to generate international interest and praise, as seen in a recent feature article about the woman and the book in The Japan Times, Japan’s largest English-language newspaper.

Written by the respected author and translator Roger Pulvers, the article details Beate’s journey from birth to her Jewish family in Vienna, a move at age 6 to Tokyo, and prominence after World War II as “the only woman in the room,” her way of describing her part in the secret committee that gathered to write Japan’s new constitution, which included an article written by Beate ensuring women’s equality.

Mr. Pulvers is full of enthusiasm for LAST BOAT, and particularly notes its effect of bringing notice to issues happening in Japan today.

“The story of how Beate found herself to be ‘the only woman in the room’ — the title of her autobiography published in 1997 — has now been put in a contemporary context by Nassrine Azimi and Michel Wasserman in LAST BOAT TO YOKOHAMA.”

He praises the scope of the book, and it’s potential impact on shaping the conversation of current moves to mitigate the reach of Article 9:

“This book draws together elements of the Sirota family’s narrative; personal revelations by Beate’s mother about life in prewar Tokyo; details about what went on during the intense time in ‘that room’; and the significance of those events for the subversion by Japan’s present government of Article 9 (the article guaranteeing Japan’s ‘nonbelligerency’) for us today.”

“The story of the life of Beate Sirota is an inspiring one, and one that continues to inspire long after she has left the room. She set an example for all individuals, regardless of gender or nationality, that one person — however modest, however unprepared for history — can make a difference.”

Check out the entire article here.

For information on purchasing this book, check out the summary page of LAST BOAT TO YOKOHAMA.