↓
Home→interviews→Making an Impact through Writing and Art with Nassrine Azimi and Michel Wasserman
Share This! 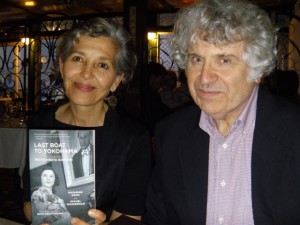 Nassrine Azimi (left) and Michel Wasserman (right)
at the “Last Boat to Yokohama” launch at the Rubin Museum.

An interview with the authors of
Last Boat to Yokohama: The Life and Legacy of Beate Sirota Gordon

This May, we at Three Rooms Press released Last Boat to Yokohama, a gorgeous tribute to Beate Sirota Gordon, the woman who secretly helped write Japan’s post WWII constitution, drafting an article granting women’s equality, and who, for the next four decades, orchestrated the exchange of arts, culture, and ideas between Eastern and Western worlds. Following two triumphant book launch celebrations in NYC, we’re sitting down with authors Nassrine Azimi and Michel Wasserman for a conversation about books, creativity, and upcoming works.

3RP: Thank you so much for chatting with us! We like to start off with an easy question. What are you reading right now?

Nassrine Azimi: I just finished reading Ibuse Masuji’s short novel Waves. It is what you call historical fiction and it is breathtaking, about the Heike fleeing Kyoto to their final demise with the forces of the Genji at their footsteps, in the twelfth century. It is in diary form. I became so obsessed with the story I went to Shikoku Island last weekend where some of the old battlegrounds are located.

Michel Wasserman: Books on French literature (Montaigne, Baudelaire, Claudel . . .), recently written by some dear friends of mine in Paris.

Do you have a favorite book? What is it?

MW: It is definitely very hard to decide, especially only one, but let’s try. Maybe Carlo Levi’s Christ Stopped at Eboli. Among the writers of today, I am particularly fond of Ismail Kadare, Kazuo Ishiguro, and Javier Cercas.

NA: Isn’t it always just the last book one has been reading?! Now I can only think of Ibuse! But I love both Inoue Yasushi and Tanizaki Junichiro, among Japanese authors of the twentieth century, and Murakami Haruki among the more recent ones. All of Ernest Hemingway I would say, and Fitzgerald’s The Great Gatsby is permanent, as is dear Jane Austen! I also love all the works of Jacques Attali—something in his worldview, and his deep cosmopolitanism really feels close.

Incredible authors, all of them. And I think our readers will especially appreciate exploring the works of the Japanese writers you’ve recommended, coming off reading Last Boat to Yokohama. Speaking of which, what were your reasons for creating Last Boat to Yokohama? How did you decide to start writing it, and what kept you motivated to finish it?

NA: Since I met Beate it was sort of in the back of my mind—in some ways she is an embodiment of cultural layers, and I felt very close to her in that sense. The US invasion of Iraq in 2003 and the unfolding hell that that catastrophic war prompted really affected me. I am originally from Iran so the Middle East is close to my heart, and I became more and more curious to learn about the work Beate did during WWII and also the Occupation of Japan in general.

MW: It was miraculously brought to me by Nassrine, and it was so close to my own personal history with music and theater in Japan that I would never have forgiven myself if I hadn’t carried it out.

And we’re all so glad that you did! The more people know about Beate Sirota Gordon and the work that she did, the better we as a whole will be.

Let’s talk a little bit about writing. What are your thoughts on writing? What makes you want to write?

MW: I cannot do without writing. I feel the urge to write.

NA: Actually the only things I want to write are op-eds! I love the intensity of the op-ed process: total absorption for a few days, it’s almost a distillation process—the short format forces you to say the most in the fewest words. And I have to be really moved or enraged by something to want to write a piece. To tell the truth, every other form of writing is quite painful to me!

Do you have any writing rituals?

NA: Waking up at the crack of dawn—that is the only time I can write—so no wonder I write so slowly!

MW: No. I would probably have [a writing ritual] if we were still using pens (I would probably use only fountain pens). I am just terrified by the prospect of losing my work on the computer, and keep frantically saving it.

Do you have any advice for new writers?

MW: No, I wouldn’t dare and everybody is unique.

What do you for fun that’s not writing?

NA: I am a tree planter/hugger! Actually four years ago, a friend and I started Green Legacy Hiroshima sending seeds and saplings of the 170 or so trees that survived Hiroshima’s atomic bombing on August 6, 1945. Just watching how this small volunteer initiative has grown into a global campaign. . . . I knew it before instinctively but Green Legacy has confirmed that trees are the noblest living things on Earth! It has also renewed my faith in people-power.

MW: I would not necessarily call it for “fun,” being for me my life’s work and a source of infinite joy, but I am an opera stage director, and I run my own opera group in Kyoto with wonderful young Japanese singers. Right now I am rehearsing La Clemenza di Tito by Mozart (to be presented June 21 at Nagaokakao Hall), a gem composed at the very end of his life between the Magic Flute and the Requiem. Directing operas, and having the gesture emerging from the score, is as vital to me as writing books.

Do you have any current projects that you’re working on?

MW: I have just finished a book, to be released in Paris, on the experience and narrative of the cataclysmic 1923 Tokyo Earthquake by then French ambassador to Japan, the poet and playwright Paul Claudel. I have worked for many years on Claudel and his unique relation to Japan, but I was spurred to write this particular book, which I had constantly thought of doing one day, by the tragic earthquake and nuclear incident that occurred in the northeastern part of Japan in 2011.

NA: Actually my research into the period of the US Occupation of Japan (1945–1952) continues. I am writing my doctoral dissertation on how important the cultural element was for the Americans who planned and executed the Occupation—and the quality of the scholars and experts and competent staff (like Beate) who arrived in Tokyo right after the war. You would think America was an entirely different nation from the one that went to war in Iraq.

Wow, what phenomenal projects! We wish you all the best with them. And our last question ends on music—very appropriate for this book. Can you make us a Last Boat to Yokohama music playlist?

MW: Of course, I would go back to one of our two heroes, Beate Sirota’s father Leo’s musical achievements. I would start with from Stravinsky’s Three Movements of Petrushka, of which Leo was one of the very first exponents, as of his master Busoni’s monumental Concerto for piano, orchestra and male chorus. I would also mention the Réminiscences de Don Juan by Liszt, a virtuoso piece he performed in duet with Busoni, and the Mozart’s Coronation Concerto that he played during his first visit to Japan in honor of the newly enthroned Emperor Hirohito. Of these, recordings by Leo of the Stravinsky and of the one piano version of the Liszt are to be found on YouTube.

NA: One winter night many years ago, long before the idea of the book had even appeared, Beate and her husband Joe visited me in New York—and she said excitedly as soon as she arrived that there would be a recording of her father Leo playing Chopin on the radio. I don’t remember the details, but I do remember watching Beate as she sat still, rapt, listening to her father’s music from decades before, it was too beautiful for words. Chopin is the atmosphere of the book for me.