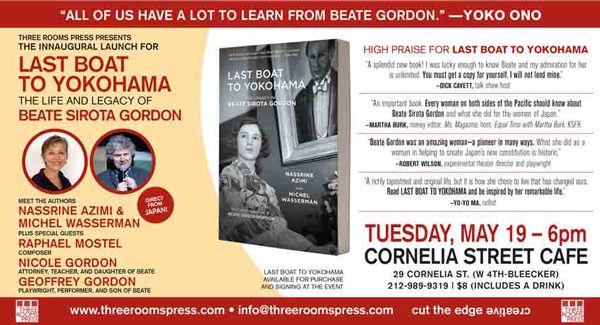 Three Rooms Press cordially invites you to attend the inaugural launch of the extraordinary biography LAST BOAT TO YOKOHAMA: THE LIFE AND LEGACY OF BEATE SIROTA GORDON, Tuesday, May 19, 6 pm, at Cornelia Street Cafe.

The event will feature readings by authors Nassrine Azimi and Michel Wasserman, a special presentation by composer/musician and Beate associate Raphael Mostel, and readings by Nicole Gordon (attorney, teacher and Beate’s daughter) and Geoffrey Paul Gordon (playwright, actor and Beate’s son). Admission is $8, which includes a free beverage. Books will be available at the event for signing and purchase.

For more information about this event or LAST BOAT TO YOKOHAMA, please email Three Rooms Press at info@threeroomspress.com