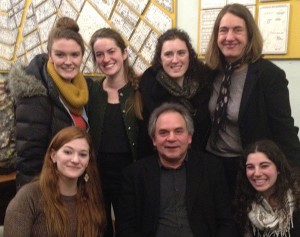 Monday, February 23rd, Three Rooms Press was “the blazing fireplace in the center of an arctic night in the West Village” as we put on our one-night only performance of “Anti,” by 3RP co-director Peter Carlaftes. Ann Firestone Ungar wrote a phenomenal review of the production. Thank you, Ann!

ANTI, an avant-garde one-act play by Peter Carlaftes, premiered in New York City to strong and sustained applause on February 23 at the Barrow Street Theatre. Portrayed by skilled actresses, the characters Ave (an unfulfilled dreamer), Riddle (a subsidized rebel), and Pierce (a government stooge), meet backstage in a theater where there’s no show.   They live in a totalitarian society marked by sirens and sounds of chaos penetrating from outside. Every action is observed, and yet the characters manage to retain their humanity. Societal control is so strong that if you want to rob a bank, for example, there’s a bank you can go to and rob. No problem. You’re being watched, and, well, have a good time.

Artists and their arts do somehow manage to survive. Ave dances, and in the distance someone practices trumpet. Riddle contemplates her fate by drawing a chalk outline of her body on the floor. Pierce stands beyond these two, an observer/manager who is herself afraid she’ll become obsolete as the control mechanisms of society advance; she might therefore be eliminated by Subsidy, the overlord. In the end Pierce leaves her official notebook in Ave’s hands. Ave opens it, an expression of concern crosses her face, and the curtain falls.

Directed with great clarity, humor, and appropriate and clever invention by Kat Georges, the spare set and subtle costumes allow the actresses, Eloïse Eonnet, Olivia Jampol, and Laura Betz, to bring their unique expressions of quiet desperation and search for purpose to the fore.

This one-night-only production was the blazing fireplace in the center of an arctic Monday night in the West Village. The producer, Three Rooms Press which publishes ANTI in Teatrophy: Three More Plays by Mr. Carlaftes, deserves praise for its courageous and stylish creation in the tradition of Sartre, Beckett, and Ionesco. 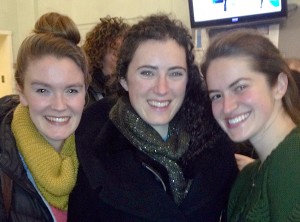