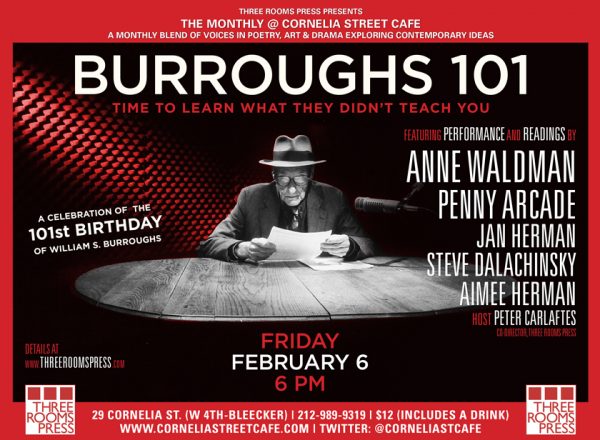 A Celebration of the 101st Birthday of  William S. Burroughs

Doors open at 5:45. Admission is $12 which includes a free drink! Cornelia Street Cafe is at 29 Cornelia Street, in the West Village, between W. 4th Street at Bleecker (http://corneliastreecafe.com/).

Information on key performers:
Anne Waldman is an internationally recognized and acclaimed poet, active member of the “Outrider” experimental poetry community, and writer, editor, teacher, performer, magpie scholar, infra-structure curator, and cultural/political activist. Her poetry is recognized in the lineage of Whitman and Ginsberg, and in the Beat, New York School, and Black Mountain trajectories of the New American Poetry. She is the author of more than 40 books, including the mini-classic Fast Speaking Woman, a collection of essays entitled Vow to Poetry and several selected poems editions including Helping the Dreamer, Kill or Cure and In the Room of Never Grieve.

Penny Arcade is a performance artist, actress and playwright, best known for her show Bitch!Dyke!Faghag!Whore!  She has worked with numerous underground film and theater artists including John Vaccaro’s Playhouse of the Ridiculous, Jack Smith, Charles Ludlam, Quentin Crisp and Andy Warhol. She is a co-founder of the Lower East Side Biography Project, an oral history of New York’s Bohemian culture from the 50s to the present.

Jan Herman is a blogger, historian, publisher, and author of numerous books including of A Talent for Trouble: The Life of Hollywood’s Most Acclaimed Director, a biography of William Wyler; and Nelson Algren: Ticket to New Jersey. His blog, www.artsjournal.com covers arts, media and culture. He often writes articles discussing William Burroughs and Beat history.

Aimee Herman is a poet and performance artist based in Brooklyn, NY looking to disembowel the architecture of gender and what it means to queer the body. Her work has been published in The Outrider Review, nin journal, Wild Gender, and more. She is the author of the full-length poetry collection, meant to wake up feeling (great weather for MEDIA). .

About the Monthly:
THE MONTHLY at Cornelia Street Cafe, hosted by Three Rooms Press, brings together writers, artists, philosophers and scientists to discuss a monthly theme. Past events have featured Code Poetry, Conspiracy Theories (on the 50th anniversary of JFK’s assassination), and illegal Leaves of Grass, an exploration of grass-related ideas from Walt Whitman to the War on Drugs.