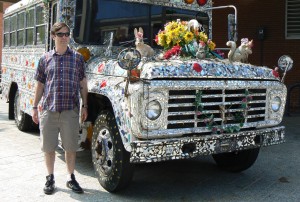 An Interview with Michael T. Fournier

During this most recent Snowpocalypse, Three Rooms Press has livelier things to do than prep for TEOTWAKI. We’re keeping off the streets (like our mayor told us to) with some conversation with punk rocker Michael T. Fournier, the super cool guy behind Swing State, Hidden Wheel (both 3RP), and Double Nickels on the Dime (33 1/3/Continuum). In addition to being the author of three incredible books, Fournier is the drummer for Dead Trend and the guitarist for Tooth and Germ; the co-editor (with fellow 3RP author Lisa Panepinto) of Cabildo Quarterly, a broadsheet lit journal; and his work has been featured in such places as Oxford American, Vice, and the Boston Globe.

3RP: Let’s start things off with an easy question. What are you reading now?

MF: Last night I finished Douglas Rushkoff’s Present Shock before bed and started Alison Bechdel’s Fun Home. I have a few novels on deck: Martin Amis’s The Zone of Interest, John Williams’s Augustus, and Sarah Gerard’s Binary Star—I’ll be on bills with Sarah twice in February, and I’m psyched to both hear and read her stuff.

Alright! All you readers out there can check out our events calendar to learn more about Michael’s readings with Sarah Gerard.

Next question—what’s your favorite book (not written by you)?

It’s impossible to narrow it down to just one (of course!). If pressed, I’d probably say Infinite Jest, which I’ve read twice now. I feel like even beginning to scratch the surface requires a few more reads. With that said, though, I read The Heart Is A Lonely Hunter in high school, which was my first experience with the craft of a novel. Prior to reading it, I hadn’t thought about the writing process, but the recurring imagery and themes in Carson McCullers’s debut made me realize that books were constructed, rather than just coming out fully formed. Then I read Catch-22, which was my first experience with fractured chronology. That was a biggie. So was Douglas Coupland’s Generation X. (“Wait, I thought everyone knew what they were doing when they finished college!”)

A popular misconception! So what was it that made you want to write in the first place?

I think initially it was just because I showed some competence—I wasn’t good at much when I was a kid, but I was always making fake newspapers with friends in grade school, and started writing stories in high school. After a point, though, I had to work at it. And unlike all the other things I tried and gave up on, I kept at it. I wanted to keep doing it, and to improve. But I’m not sure why, honestly. Now, it’s the challenge of craft: trying to improve and write a better book than the last one without relying on the same structure or narrative approaches.

Speaking of, let’s talk a little about your newest novel, Swing State. What were your reasons for writing it?

Swing State started as an homage to John Irving. I had just moved from Orono, Maine to Western Mass, and in moving, the relative quaintness of my former town sank in. My wife and I were living in this horrible uninsulated apartment, and I was commuting ninety minutes into the rising sun five days a week. I guess it’s no surprise, given those circumstances, that originally the book was intended as an escape.

Eventually, circumstances changed, and when they did, the book didn’t seem right. Early drafts were sunny, which went against everything I saw every summer up in Maine, working with rural kids in the Upward Bound program. After a time, the bleak hopelessness of failing economies overshadowed what I had thought of as a pleasant small-town story, and I adjusted accordingly.

What about today? Got any new projects you’re working on?

I’ve been whacking away at a new one since a month or two after I finished Swing State; per usual, I came in with ideas, and then saw them change over time. What I thought was a book about bitcoins and non-accredited universities is looking more like a book about neighborhood restaurants and reality TV.

That sounds awesome to us! When writing this, do you have any rituals you stick to?

Get up, pour a cup of coffee, and get to work on my ancient desktop, with no internet-enabled devices in sight.

And last question! People tend to think of writers as only ever writing, but that’s not really true, and certainly not true of you. So what do you for fun that’s not writing?

I play drums in Dead Trend, and guitar in Tooth and Germ. I listen to baseball games, go running when the sidewalks aren’t iced over, cook, wish I still had a garden. My wife and I hang out and shop at thrift stores and make up songs about our cat.

Michael’s Playlist from the Writing of Swing State