As 2014 winds to a close, Three Rooms Press is already looking forward to the release of its Winter/Spring 2015 titles, with five powerful new books on the horizon that continue to expand the “fierce independent publisher” catalog and reputation for releasing inspiring new work including TEATROPHY: 3 MORE PLAYS, by Peter Carlaftes; MY WATERY SELF: MEMOIRS OF A MARINE SCIENTIST, by distinguished aquatic biologist Dr. Stephen Spotte; DARK CITY LIGHTS: NEW YORK STORIES, edited by famed mystery author Lawrence Block; LAST BOAT TO YOKOHAMA: THE LIFE AND LEGACY OF BEATE SIROTA GORDON, an extraordinary biography by Nassrine Azimi and Michel Wasserman; and the eighth edition of MAINTENANT, 3RP’s internationally-renowned journal of dada writing and art. 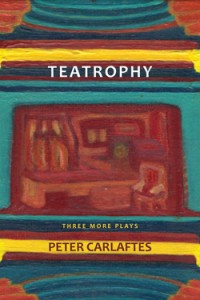 First up for 2015, set for a release date of February 24, is TEATROPHY: 3 MORE PLAYS, the second collection of original drama by Three Rooms Press co-director Peter Carlaftes. In these three intense and brilliant plays, the impressive multi-genre author Carlaftes explores themes of identity in crisis with fascinating characters forced to confront issues of government surveillance and data mining, the effects of child abuse during adulthood, and shifting sexual orientation. In “ANTI,” Carlaftes explores a frightening future—in which government surveillance and data mining is the norm—through the eyes of a theater director on the verge of giving up hope. The chilling psycho-sexual drama “CLOSURE” examines the relationship between a woman whose sister was abused a child, and the rapist-murderer that stalks her outside her therapist’s offi ce. In the tender and humorous “INSIDE STRAIGHT,” characters must confront their lovers’ sudden shift in sexual orientation as a gay man and a lesbian woman discover they are attracted to each other. Playwright Richard Vetere calls the plays “spiked with dark humor, wise-cracks and moments of deep caring.” Superb drama on both page and stage. Preorder now at Amazon, Barnes and Noble, Powells or your favorite indie bookstore. 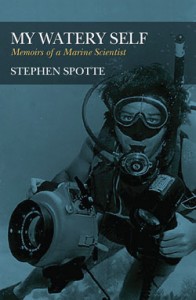 March 10 marks the release date of MY WATERY SELF, the very compelling new memoir by respected marine scientist Stephen Spotte. Author/scientist Spotte traces a fascinating trail through a life that began in West Virgina coal camps, drifted through reckless bohemian times of 60s countercultural indulgence in Beach Haven, New Jersey, and led to a career as a highly-respected marine biologist. Spotte’s singular voice offers a wet and occasionally very weird perspective on the world. The stories he shares—such as his stint as curator of the New York Aquarium at Coney Island at the tail end of the hippie era—are compelling and thoroughly enjoyable as he elevates the people and situations he encounters to mythical levels, blending empirical observation with literary prose. Dr. Stephen Spotte, a marine scientist born and raised in West Virginia, is the author or coauthor of more than eighty scientific papers on marine biology, ocean chemistry and engineering, and aquaculture, which became the cornerstone of modern aquarium keeping. Dr. Spotte has a B.S. degree from Marshall University, and a Ph.D. from the University of Southern Mississippi. He has been a field biologist for the U.S. Army Corps of Engineers Waterways Experiment Station (Vicksburg, MS); curator and later director of the Aquarium of Niagara Falls (NY); curator of the New York Aquarium and Osborn Laboratories of Marine Science (Brooklyn, NY); director of Mystic Aquarium (Mystic, CT); executive director of Sea Research Foundation and research scientist at the Marine Sciences and Technology Center, University of Connecticut (Groton, CT); principal investigator, Coral Reef Ecology Program (Turks and Caicos Islands, B.W.I.), and adjunct scientist at Mote Marine Laboratory (Sarasota, FL). His research has encompassed much of the coastal U.S., Canadian Arctic, Bering Sea, West Indies, Indo-West Pacific, Central America, and the Amazon basin of Ecuador and Brazil. His popular articles about the sea have appeared in National Wildlife, On the Sound, Animal Kingdom, and Science Digest. He has published eighteen books, including three volumes of fiction, a memoir, and a work of cultural theory. Preorder now at Amazon, Barnes and Noble, Powells or your favorite indie bookstore. 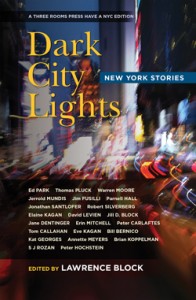 April may be the cruelest month for some, but for 3RP, it’ll instead be pretty darn cool, with the April 28th release of DARK CITY LIGHTS: NEW YORK STORIES, the fourth installment of the HAVE A NYC series, and the first to include a guest editor, which in this case is the esteemed and remarkable mystery and crime master Lawrence Block. This set of stories based in New York includes 23 thrilling, hilarious and poignant tales written by new and acclaimed fiction masters, including Robert Silverberg, Hugo and Nebula Award science fiction writer; Ed Park, author of Personal Days and former senior editor of Amazon’s literary imprint Little A; Jim Fusilli, Wall Street Journal rock and pop music critic and author, Closing Time; Jonathan Santlofer, author of The Death Artist; and Parnell Hall, author of the Puzzle Lady mystery series. Other authors include Brian Koppelman and David Levien (co-authors of Rounders and Ocean’s 13; Tom Callahan (award-winning reporter and freelance writer for New York Times, Parade Magazine); Annette Meyers (author, Free Love); Peter Hochstein (author, Heiress Strangled in Molten Chocolate at Nazi Sex Orgy! A Memoir); Bill Bernico (author, The Cooper Collection); Elaine Kagan (author, No Good-Byes; actress, GoodFellas); Jerrold Mundis (author, How to Get Out of Debt, The Dogs); S. J. Rozan (Edgar, Shamus, Anthony, Nero and Macavity award wining author); Jane Dentinger (author, Murder on Cue, Who Dropped Peter Pan?); Warren Moore (author, Broken Glass Waltzes); Jill Block (mystery author); Eve Kagan (writer and critically-acclaimed actress), Thomas Pluck (author, Blade of Dishonor), Erin Mitchell (crime fiction expert) and more. Every story’s a winner and this is one you definitely want to preorder early to make sure you get your hands on a first edition. Preorder at Amazon, Barnes & Noble, Powells, or favorite Indie bookstore. 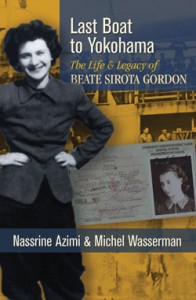 May 2015 includes this flower of a book: LAST BOAT TO YOKOHAMA: THE LIFE AND LEGACY OF BEATE SIROTA GORDON, a fascinating biography by international peace activist and writer Nassrine Azimi and Japanese theater and music connoisseur Michel Wasserman. In 1946, a remarkable woman secretly helped create Japan’s new constitution, writing a clause which mandated equal rights for all women in Japan. Few could imagine that Article 24 was the work of a then twenty-two-year-old European-born American of Ukrainian descent who had grown up in Japan. Her name was Beate Sirota, and she remains an idol for generations of Japanese women to this day. In America, she is responsible for introducing hundreds of previously-unknown Asian performers and artists to the public for almost four decades. LAST BOAT TO YOKOHAMA includes a foreword by Beate, an in-depth look at her father, world-renowned classical pianist Leo Sirota, personal diaries from the World War II era by her mother, Augustine, as well as a detailed overview of her life, the effect of Article 24 and her impact on culture through her dedication to introducing authentic music of the Far East to American audiences. Gloria Steinam notes: “Gordon’s personal story will enlighten all who question the importance of women’s presence in the corridors of power.” And Yoko Ono, one of Beate’s early students, call Beate, “A woman with the courage to match her convictions.” Again, preorder is essential to give you access to a first edition. Preorder at Amazon, Barnes and Noble, Powells Books or IndieBound. 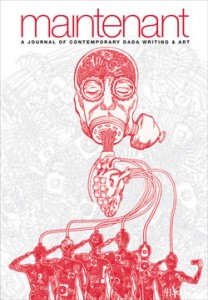 Finally, in June 2015, we’ll be launching the eighth annual edition of MAINTENANT: A JOURNAL OF CONTEMPORARY DADA WRITING AND ART. The series has grown from a simple 16-page hand-stapled booklet just eight years ago, to a internationally renowned perfect bound edition now archive in New York’s Museum of Modern Art and other museums worldwide. Past issues have included contributions by American writers and artists including Gerard Malanga, Exene Cervenka, Roger Conover, Charles Plymell, Mike Watt, W. K. Stratton, and Jerome Rothenberg, as well as an expanded selection of work by leading European, Asian, and Latin American dadaists including Jacques Lebel, David Barnes, Philip Meersman, Ulf Stolterfoht, Pontus Carle, and many more. In addition, favorite legacy artists and writers including Allen Ginsberg, William Burroughs, Arthur Cravan, Tristan Tzara, Mina Loy, and Scott Wannberg have been included in recent issues. MAINTENANT 9 will be the first color edition, which is something truly exciting! Preorder now at Amazon, Barnes and Noble, Powells, or your favorite indie bookstore. The new issue is being built as we speak from contributions relating to the theme “TECH-NO PRISONERS.” To submit your work, go to our submission page. Deadline is December 31!