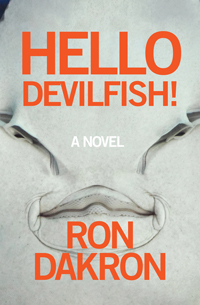 HELLO DEVILFISH!, the Kaiju, hilarious, Manglish-laced new novel by Ron Dakron has barely hit the shelves and it is already garnering rave reviews across the internet. In a Bookshots column by Ryan Peverly on LitReactor.com, HELLO DEVILFISH! gets a big thumbs up, and even a new title: A Portrait of the Stingray as a Young Man. Mwha-ha-ha!

Peverly isn’t shy about his enthusiasm for the novel:

Hello Devilfish! isn’t some serious-faced monster story. It’s a comic romp that makes you laugh nearly as much as you shake your head and say, “What the fuck am I reading?” It’s a great feeling, a change-of-pace in a literary world with not nearly enough changes of pace. It’s like Monty Python acting out a Christopher Moore novel, or Christopher Moore writing a Monty Python sketch, or maybe it’s not like either of those things, and it probably isn’t because it’s one of the more unique stories I’ve read in recent memory and unlike anything you’ll read this year.

You can order Hello Devilfish! directly from Three Rooms Press here, at your favorite indie bookstore or your online book places.