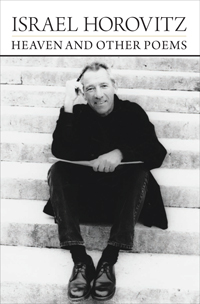 The exclusive interview is published on page 18 in the October 2014 issue of Forecast Magazine, a publication produced by the major distributor to libraries, Baker & Taylor. Complete issue can be downloaded from the Baker and Taylor website.

For a look at a reprint of just the interview, click here October_2014_ThreeRooms_Forecast.

Horovitz’s has written poetry all his life. He explains to Banks his passion for poetry is truly personal. “I write poetry for myself, really.” He discusses his admiration for Samuel Beckett, who translated on of Horovitz’s poems included in the collection, along with a story about a meeting with Beckett and a collection of poems so moving and stirring that Banks declared them to be “Poems that make our lives larger than they would be without them.”

Horovitz recently directed his first movie, MY OLD LADY, based on his play of the same name. The film, starring Kevin Kline, Maggie Smith and Kristin Scott Thomas, opens in a limited release on Friday, Sept. 12.

For more information about the HEAVEN AND OTHER POEMS and Israel Horovitz, visit Horovitz’s Three Rooms Press author page.