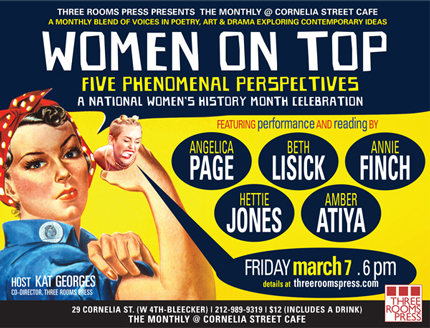 Doors open at 5:45. Admission is $12 which includes a free beer, wine or soft drink. Cornelia Street Cafe is at 29 Cornelia Street, in the West Village, between W. 4th Street at Bleecker (http://corneliastreecafe.com/).

The event is part of THE MONTHLY series at Cornelia Street Cafe, hosted by Three Rooms Press, which brings together writers, artists, philosophers and scientists to delve into a different theme each month from divergent perspectives. Past themes have included conspiracy theories (on the 50th anniversary of JFK’s assassination), Illegal Leaves of Grass, an exploration of grass-related ideas from Walt Whitman to the War on Drugs, and notable literary figures including Charles Bukowski and William Burroughs.

Three Rooms Press is a New York-based leading independent publisher of cut-the-edge creative content, including poetry, translations, drama, literary fiction, creative historical nonfiction, memoir, photography and art. Recent and forthcoming books include Lisa Panepinto’s ON THIS BORROWED BIKE, Janet Hamill’s TALES FROM THE ETERNAL CAFE (with an introduction by Patti Smith); MIKE WATT: ON AND OFF BASS, a photo memoir by the great punk rock bass player; and the forthcoming novels THE WRITERS AFTERLIFE by Richard Vetere and LIGHT OF THE DIDDICOY by Eamon Loingsigh. http://threeroomspress.com

Annie Finch is a poet permformer and mentor who “speaks for something larger than the ego” according to UC Berkeley professor Charles Altieri: http://anniefinch.com; Winner of numerous awards, Annie’s poetry has been featured on Def Poetry Jam, National Public Radio, and Voice of America, in journals such as Poetry, Kenyon Review, Yale Review, Hudson Review, and Paris Review, and in many anthologies, most recently The Penguin Book of Twentieth-Century American Poetry, and author of six books of poetry including Eve, Calendars, Among the Goddesses, and Spells: New and Selected Poems.

Beth Lisick is a New York Times bestselling author and performer who has blown away audiences the world over: http://bethlisick.com; She is the author of five books: the memoir collection Yokohama Threeway and Other Small Shames, the New York Times bestselling comic memoir Everybody Into the Pool, the gonzo self-help manifesto Helping Me Help Myself, the story collection This Too Can Be Yours, and the performance poetry/story collection Monkey Girl.

Angelica Page is a playwright/performer of the highest possible voltage: http://angelicapage.com; She most recently starred on Broadway in the Tony nominated The Best Man, is currently developing her memoir-play Turning Page, as well as documentary film and book of selected memoirs about her mother, the legendary Geraldine Page.

Hettie Jones has been a mover/shaker since the Beats and the author of How I Became Hettie Jones: http://www.poets.org/poet.php/prmPID/444; She is currently involved with PEN American Center’s Prison Writing committee and runs a writing workshop at the New York State Correctional Facility for Women at Bedford Hills. Hettie Jones lives in New York City, where she writes and teaches at The New School.

Amber Atiya is an uncompromising queer poet and powerful performer: http://www.drunkenboat.com/db14/1poe/atiya/; Yes, Amber Atiya is a queer poet. Yes, she performs (Theater for the New City, Fashion Institute of Technology, Lehman College, Nuyorican Poets Café, etc.) and has been published (Cartier Street Review, Word Riot, Brownstone Poets Anthology, and Coloring Book, an anthology of multicultural writers, with work forthcoming in A Gathering of the Tribes). Yes, she is co-founder of a weekly women’s writing group, currently celebrating its nine year anniversary.