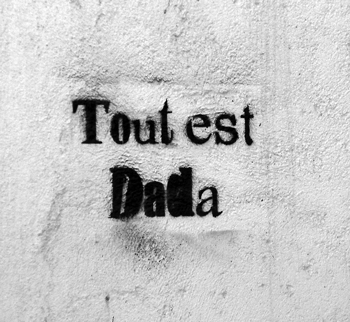 plus live reading & performances by

The first 10 people will receive a free copy Maintenant 7 and all will be eligible to win Dada-related prizes including books, dvds, photographs and more.

Doors open at 5:45. Admission is $12, which includes a free drink. Cornelia Street Cafe is at 29 Cornelia Street, in the West Village, between W. 4th Street at Bleecker (http://corneliastreecafe.com). Reservations and additional information: info@threeroomspress.com.

The Dada Salon is the latest installment of The Monthly at Cornelia Street Cafe, a unique series curated by Three Rooms Press that brings together leading poets, intellectuals, performers and budding rebels on a different topic each month. Upcoming events include: APRIL 3: ILLEGAL LEAVES OF GRASS (a tribute to Walt Whitman and an exploration of the movement to legalize marijuana); MAY 3: HAVE A NYC 2 (readings of New York-based short stories); JUNE 7: HYDROGEN JUKEBOX (modern poetry performed to live rock band).