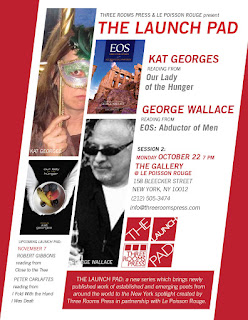 
Following a packed opening night, The Launch Pad series continues at Le Poisson Rouge on Monday October 22 with the launch of books by two award-winning, cutting edge NY poets: George Wallace and Kat Georges. The Launch Pad series was created by Three Rooms Press in partnership with Le Poisson Rouge, and brings newly published work of established and emerging poets from around the world to the New York spotlight.

EOS: Abductor of Men, by George Wallace is a bilingual collection (Greek-English) dedicated to the contemporary struggles of the Greek people. Wallace rivets readers with his thoroughly original, modern day beat flow, elevating bakeries to the temples of gods and love to a powerful river. “Like no other poet you’ve read before…Wallace doesn’t want to simply remake the conventions of the contemporary free verse poems as we understand them; he seems to want to remake the reader herself, to alter her aesthetically and psychologically,” says Terri Brown-Davidson, Pedestal Magazine. With stunning translations to Greek by Lina Sipitanou, this book is like no other you’ve read before. George Wallace (AB, MPH, MFA) is an award winning poet and journalist from New York who has performed his work across America and in Europe. Author of Poppin’ Johnny (Three Rooms Press, 2009) and twenty-five chapbooks of poetry, he has served as editor of Poetrybay (www.poetrybay.com), Long Island Quarterly, Walt’s Corner, Great Weather for Media, and other electronic and hard copy literary publications. In 2011 he was named Writer in Residence at the Walt Whitman Birthplace.

Our Lady of the Hunger, is the first full-length collection of poems by Kat Georges, whose work has been heard and published internationally for three decades. Often hilarious, always insightful, Kat Georges writes inspired narrative poems inspired by punk rock, pop culture, food and the driving need to create, all the while exploring what it is to be a woman in the modern world. Georges is an internationally-recognized NYC-based poet, playwright, performer, editor and designer. In addition to writing poetry, she has directed numerous Off-Broadway plays, curated poetry readings (including the bi-monthly Son of a Pony poetry reading series at Cornelia Street Cafe), and performed widely. She is co-founder and editor of Three Rooms Press; their most recent books include Maintenant 6: A Journal of Contemporary Dada Writing and Art; Have a NYC: New York Short Stories; and Mike Watt: On and Off Bass, a collection of photos and distilled tour diaries from the great punk rock bass player. Her poetry is included in The Outlaw Bible of American Poetry (Thunders Mouth Press), The Verdict is In (manic d press; also co-editor); Mas Tequila (Mas Tequila Press); and The Unbearables Big Book of Sex (Autonomedia), among countless other journals and literary magazines.
Session 2 of The Launch Pad @ LPR is Monday, October 22. Doors open 6:30 pm; showtime: 7 p.m. Admission is free; reservations are highly recommended. Le Poisson Rouge is at 158 Bleecker Street (at Thompson). Additional information: info@threeroomspress.com.
Share This!