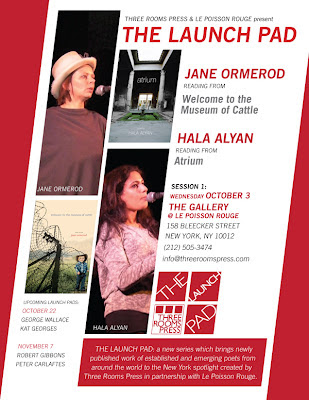 Two of NYC’s premier female poets—Hala Alyan and Jane Ormerod—share the stage at the first installment of The Launch Pad @ LPR, a new series, created by Three Rooms Press in partnership with Le Poisson Rouge, which brings newly published work of established and emerging poets from around the world to the New York spotlight.

NYC-based visual poet Jane Ormerod has captivated audiences internationally with her
impactful delivery of her work. On the page, her work is even more astonishing. In her new book, Welcome to the Museum of Cattle, she is absolutely fearless, in both subject matter and style, as she explores films, life and innocence with a totally original and exciting language. Says Daniel Yaryan, producer of San Francisco’s “Sparring with Beatnik Ghosts series, “Her signature style is beyond belief—moving lightspeed with an astoundingly unique beat and the ability to communicate with complete command of language.” London-based artist Daniel Sturgis adds that her poems and performance, “sublimely acknowledge the entwined traditions of Dada and early modernist poetry, the gendered and transgressive literary punk of Kathy Acker and Patti Smith, and low-fi dub rant.”

Coming soon to The Launch Pad