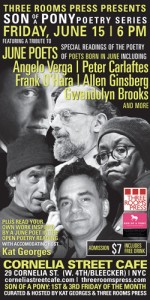 Three Rooms Press presents Son of a Pony, on Friday, June 15, with a special tribute to poets born in the month of June!

There may be lots of June brides, but — did you know? — June is also the month in which a whole slew of truly great poets were born! So join Son of a Pony in a tribute to the poets of June! We’ll have special featured readings of work by such notable poets as Frank O’Hara, Allen Ginsberg, Gwendolyn Brooks, Angelo Verga (poet extraordinaire and curator of Cornelia Street Cafe literary events), William Butler Yeats, Peter Carlaftes, Anne Carson and David Lehman.

Plus–a very special Son of a Pony open reading in which you can bring your favorite poem written by or inspired by a poet with a June birthday–maybe even . . . You! The open reading at the cafe, hosted and curated by the buoyant Kat Georges. Doors open at 5:45 p.m.; open reading begins at 6 p.m. Admission is $7, which includes a free drink.