↓
Home→Overview→Poets Leanne Averbach and Yuyutsu R.D. Sharma Read at Son of a Pony Friday 5/14
Share This! 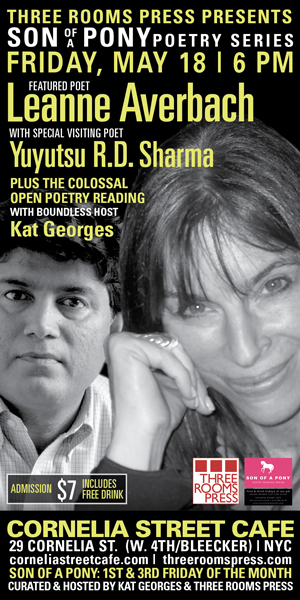 LEANNE AVERBACH is a Canadian poet and experimental filmmaker who has published and performed her work with musicians across Canada, New York City and Italy. Her first book Fever (Mansfield Press, Toronto) was short-listed for the national Canadian Gerald Lampert Memorial prize, 2005. Her companion CD Fever is a fusion of her spoken words and blues/jazz accompaniment with her band, Indigo and they are currently cutting a second CD. Averbach’s short films have garnered numerous awards, including Best International Short at the New York Independent International Film & Video Festival, 2008 for Teacups & Mink. She is currently writing her first feature length film. Leanne will be reading tonight from her second volume of poetry Come Closer (Tightrope Books, Toronto) available for purchase at the back table with her CD, Fever.

YUYUTSU RD SHARMA is the author of nine poetry collections, including Milarepa’s Bones (Nirala, 2102), Space Cake, Amsterdam & Other Poems from Europe and America (Howling Dog Press, 2009) and more. He has received fellowships and grants from The Rockefeller Foundation, Ireland Literature Exchange, Trubar Foundation, Slovenia and more. A widely traveled author, his work has been heard in London, Belfast, Amsterdam, Chicago, Canada, Italy, New York and his home town of Kathmandu. This year, he is a visiting poet at New York University, and in June, he will be a guest poet at the Poetry Parnassus Festival organized to celebrate the London Olympics of 2012.

The featured reading follows the essential Son of a Pony open reading at the cafe, hosted and curated by the fervid Kat Georges. Doors open at 5:45 p.m.; open reading begins at 6 p.m. Admission is $7, which includes a free drink.