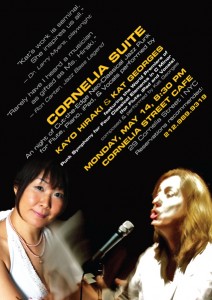 Classical and contemporary jazz collide as pianist Kayo Hiraki and flautist/poet/composer Kat Georges cut-the-edge with “Cornelia Suite,” an anthology of cut-the-edge neo-classical jazz for piano, flute, iPad and vocals. The event will include the world premiere of Ms. Georges’  hard-bit “Punk Symphony for Four Classical Elements in C Minor (for Flute, iPad and Vocals)” and will be held at Cornelia Street Cafe in the West Village. Doors open at 8:30. Tickets are $20 (includes a drink).

New York based pianist and Steinway piano artist, Kayo Hiraki appears in Cornelia Street Cafe for the first time. Steinway Artist Kayo Hiraki was born in Japan, the daughter of a classical pianist. A child prodigy, she started playing the piano when she was three years old. She has been performing five nights a week for seventeen years as the house pianist at the famous jazz spot, Arturo’s in Greenwich Village. She has played at the Blue Note NYC with her Kayo Hiraki Piano Trio, including the legendary bassist Ron Carter, who notes: “Rarely have I heard a musician as gifted as Ms. Hiraki. To hear her play is to experience the joy of her creative ability and the depth of her experience as a talented performer.” She tours regularly in Europe and Japan and was recently featured in Japan Airline in-flight magazine. She will perform a series of jazz tunes inspired by classical compositions.

Kayo will be joined onstage by New York-based poet/composer/flautist Kat Georges. Kat will present the World Premiere of her hard-bit neo-classical, “Punk Symphony for Four Classical Elements in C Minor (for Flute, iPad and Vocals).” Kat Georges is a musician, poet, playwright, performer and designer. Her full-length poetry collection, “Our Lady of the Hunger,” will be released soon on Three Rooms Press, which published two previous collections, “Punk Rock Journal” and “Slow Dance at 120 Beats a Minute.” In New York since 2003, she has directed numerous Off-Broadway plays, curated poetry readings, and performed widely. She is co-founder and editor of Three Rooms Press; its most recent books include “Maintenant 6: A Journal of Contemporary Dada Writing and Art” and “Mike Watt: On and Off Bass,” a collection of photos and distilled tour diaries from the legendary punk rock bass player.