↓
Home→Books and Authors→This Way to The End Times: Classic Tales of the Apocalypse
Share This! 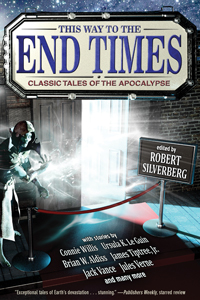 This Way to The End Times

“A much needed volume.” —ALA Booklist–STARRED Review

THIS WAY TO THE END TIMES: Classic Tales of the Apocalypse is a gripping collection of twenty-one stories about the not-too-distant demise of the earth as we know it. Editor ROBERT SILVERBERG–one of science-fiction’s most beloved writers–handpicked each piece in the collection and includes an introduction to each story, detailing reasons for its selection and offering insight into its position in the history of apocalyptic literature. Included are little-known, brilliant tales by sci-fi legends Jules Vernes and Olaf Stapledon, to intense short works by sci-fi masters Ursula K. Le Guin, Connie Willis, Jack Vance, and Brian W. Aldiss, to haunting works by contemporary authors Dale Bailey, Alvaro Zinos-Amaro, Karen Haber and Megan Arkenberg .A unique collection for longtime and new fans of speculative fiction, THIS WAY TO THE END TIMES roars into the future wide-eyed and full speed ahead.

High Praise for THIS WAY TO THE END TIMES

“Twenty-one exceptional tales of Earth’s devastation and humans’ inventive, and often ironically self-destructive, ways of surviving . . . These stunning stories contemplate survival while questioning whether life is worth saving, and many have such rich ideas and settings that they could easily spark full-length novels.” —Publishers Weekly, Starred Review

“With its range of contributors, this is a much needed volume that will both satisfy the high demand for apocalyptic tales and remind readers of the actual breadth and depth of this literature of the end of the world.” —ALA Booklist, Starred Review

“The variety of ways in which these stories choose to end the world offers a great deal—nightmarish, funny, lonely, or hopeful—for the imagination. Wonderfully written, surprisingly varied apocalyptic tales.” —Kirkus Reviews

“This collection is perfect for teen readers who have either exhausted the YA supply of apocalyptic tales or are beginning to outgrow them. This book will open their eyes to many “new to them” authors.” —RA For All: Horror

About the Contributors to THIS WAY TO THE END TIMES
Brian W. Aldiss is an English writer and anthologies editor, best known for his short story “Super-Toys Last All Sumer Long,” the basis for the Stanley Kubrick-developed Steven Spielberg film “A.I. Artificial Intelligence.” He is the winner of two Hugo Awards and one Nebula Award, and the 2000 Grand Master of the Science Fiction Writers of America.
Megan Artenberg is an award-winning writer of science fiction, fantasy, and horror. Her work has appeared in over fifty publications, including Asimov’s, Lightspeed, Beneath Ceaseless Skies, and Clakesworld, and in anthologies such as The Apocalypse Triptych, Heiresses of Russ, and The Best Horror of the Year. Her stories have been translated into Chinese and Japanese. She lives in Davis, CA.
Dale Bailey is a novelist and short story author focusing on speculative fiction including science fiction, dark fantasy, and horror. His short story “Death and Suffrage,” later filmed as part of Showtime television’s anthology series “Masters of Horror,” won the International Horror Guild Award. He lives in North Carolina with his wife and daughter.
Malcolm Edwards is best known for his work as a renowned sci-fi editor. Has worked with J.G. Ballard, Tom Clancy, Philp K. Dick, Stephen King, William Gibson. He lives in London, U.K.
James Elroy Flecker (1884-1915) was a British poet, playwright, and novelist, best known for his poem “The Golden Journey to Samarkand,” and his novella The Last Generation.
Philip Latham (1902-1981) was the pseudonym for R.S. Richardson, an astronomer who for twenty-five years was on the staff of the Mount Wilson Observatory and, later, the Mount Palomar Observatory in Southern California, and in 1938 became Associate Director of the Griffith Observatory in Los Angeles. He called on his astronomical knowledge to write about twenty short stories between 1946 and 1977.
Ursula K. Le Guin is an American author of novels, children’s books, short stories, and poetry. Her work has often depicted futuristic or imaginary alternative worlds in politics, the natural environment, gender, religion, sexuality and ethnography.
Fritz Lieber (1910-1992) was an American writer of fantasy, horror, and science fiction. Leiber can be regarded as one of the fathers of sword and sorcery fantasy, having in fact created the term. Moreover, he excelled in all fields of speculative fiction, writing award-winning work in fantasy, horror, and science fiction.
Frank Lillie Pollock (1876-1957) was an early twentieth-century Canadian science fiction writer. He wrote ‘commercial fiction’ under the pseudonym Frank L Pollock and literary fiction under his own name.
Robert Silverberg is one of science fiction’s most beloved writers, and the author of such contemporary classics as Dying Inside, Downward to the Earth, Lord Valentine’s Castle, and At Winter’s End. He is a former president of the Science Fiction and Fantasy Writers of America and the winner of five Nebula Awards and five Hugo Awards. In 2004, the Science Fiction and Fantasy Writers of America presented him with the Grand Master Award. Silverberg is one of twenty-nine writers to have received that distinction.
Olaf Stapledon (1886–1950) was a British philosopher and author of influential works of science fiction including Star Maker, Last and First Men, and Odd John.
James Tiptree Jr. (1915–1987) was the pen name of notable American science fiction author Alice Bradley Sheldon, known for her technologically-focused short story collections, often with feminist themes.
Jack Vance (1916–2013) was an American mystery, fantasy, and science fiction writer, winner of the World Fantast Award for Life Achievement and SFFWA Grand Master, and a member of the Science Fiction Hall of Fame. Winner of three Hugo Awards and two Nebula Awards, and an Edgar Award.
Jules Verne (1828–1905) was a French novelist, poet, and playwright best known for his adventure novels and his profound influence on the literary genre of science fiction. Most translated author in history after Shakespeare.
G. Peyton Wertenbaker (1907-1968) was an early author of “scientifiction”, publishing his first story, “The Man from the Atom,” in Amazing Stories Magazine at age 15. After writing several other stories from the magazine, through 1930, he turned to literary fiction under the alias Green Peyton, and later served on the editorial board of Fortune magazine.
Connie Willis is an American science fiction/fantasy writer. She has won eleven Hugo Awards and seven Nebula Awards—more major award than any other writer. She was inducted into the Science Fiction Hall of Fame in 2009 and was named SFWA Grand Master in 2011. Her novels include Doomsday Book, To Say Nothing of the Dog, and Blackout/All Clear (all Hugo award winners). She lives in Greeley, Colorado.
Alvaro Zinos-Amaro is a science fiction author whose work as been published in numerous journals. He co-authored, with Robert Silverberg, When the Blue Shift Comes, a two part novella of speculative fiction, and recently published Traveler of Worlds: Conversations with Robert Silverberg, which collects 15 years of interviews and notes on the famed author. Zinos-Amaro lives in Irvine, CA.