↓
Home→Books and Authors→THE FAKING OF THE PRESIDENT: Nineteen Stories of White House Noir, edited by Peter Carlaftes
Share This! 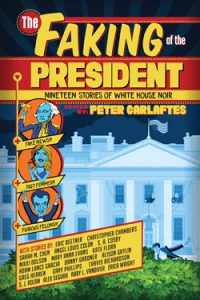 “The Faking of the President is a wild, rollicking ride through the corridors of power both past and present. These stories are dark, humorous and thoughtful; they take the presidency and its environs and turn it into a fun house of noirish story-telling. Get this book and read it during the presidential campaign to help keep your head on straight.” —T. J. English, New York Times Best Selling author of Havana Nocturne and The Westies

What would the White House be like if U.S. Presidents of the past were not restricted by the time-honored hallmarks and traditional behavior of the office, leaving them free to do whatever they wanted, anytime and anywhere?

THE FAKING OF THE PRESIDENT: Nineteen Stories of White House Noir pulls back the curtain on the “new norm” for America’s highest office, with a collection of bizarre new stories by a diverse group of renowned authors that take readers across the chasm of reality into an alternate universe—where Nixon takes a wacky psychedelic trip with Elvis Presley; where a time-traveling renegade targets members of the George Bush administration with disastrous results; where a spy seizes a sudden opportunity for power after Woodrow Wilson’s stroke. The stories are outlandish—but when it comes to the White House of today—strange behavior and kinky, zany antics are no longer implausible.

Spinning new tales of White House noir, these yarns confirm that absolute power—minus checks and balances—absolutely corrupts. THE FAKING OF THE PRESIDENT acknowledges the wacko state of politics today, and openly wonders how far down the rabbit hole the American presidency can go.

In an era where the bar for what is acceptable has shifted beyond what the founding fathers ever imagined, THE FAKING OF THE PRESIDENT is a highly recommended unique creative act of resistance, and a must-have for fans of politics, noir, and speculative fiction.

Preorder THE FAKING OF THE PRESIDENT now!:

Peter Carlaftes is a New York-based editor, publisher, playwright, and author. His books include A Year on Facebook(humor); Drunkyard Dog and I Fold with the Hand I Was Dealt (poetry); and Triumph for Rent (3 Plays) and Teatrophy (3 More Plays). He is editor of two short story collections in the Have a NYC noir series, as well the annual journal of Dada writing and art, Maintenant. He is co-director and vice president of acquisitions for Three Rooms Press, a New York-based independent publisher. He lives in New York City.