Raising Girls in Bohemia: Meditations of an American Father
A Memoir in Essays by Richard Katrovas 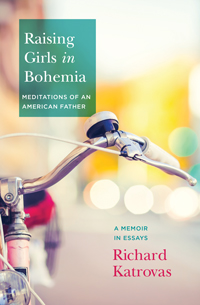 In the remarkable, personal, and political essays of RAISING GIRLS IN BOHEMIA: MEDITATIONS OF AN AMERICAN FATHER, writer and poet Richard Katrovas (Mystic Pig, Prague Winter), chronicles his life as a father of three Czech-American daughters. While tracing what fatherhood has taught him about the world, Katrovas delves in depth into a range of intricately-related, yet far-flung subjects including fine dining, sexual epithets, gender identity, racism, poetry, and education, tracing “the contours of his ignorance” about all things. Through the course of these fine essays, Katrovas unveils what it means to be an American and to be a man, and especially what it means to be a father of three daughters, born in Prague, in what we can only hope is the twilight of patriarchy. As award-winning author Stuart Dybek (I Sailed with Magellen), notes, ”Richard Katrovas vividly conveys the complexity of the relationship between a father and his bilingual daughters who are being raised as citizens of two very different cultures. The freshly written, deeply felt essays in Raising Girls in Bohemia, were fascinating when first published individually in literary magazines. But to read these essays together adds a welcome sense of an overarching narrative, and dials the level of complexity higher still. A vital, one-of-a-kind book.”

Praise for Raising Girls in Bohemia

“Katrovas’ memoir in essays is so neatly woven, that the occasional jumps in time embrace rather than lose the reader, and also contribute to the feel of a natural and evolving conversation. Likewise, his decision to intermix terms that could be found on a SAT or ACT test with common slang aptly portray atypical situations in such a way that they seem simultaneously familiar and foreign. . . His personal reflections are superb. Readers will root for Katrovas’ efforts to ensure his daughters feel native to both of their parents’ home countries.” –Kasey Beduhn, San Francisco Book Review

“RAISING GIRLS IN BOHEMIA is by turns political and personal, honest and full of insight into the human condition, all filtered through a poet’s thoughtful lens. Insightful rumination on being human across geographical and emotional divisions.” — Rob LeFebvre, Shelf Awareness

“A potent, fascinating book.” —Tracy Kidder, Strength in What Remains

“RAISING GIRLS IN BOHEMIA is a brave meditation on the hazards and fleeting forms of happiness available to a navigator of two divergent cultures. The American poet and prose writer Richard Katrovas explores the fallout from his doomed marriage to a Czech woman, and in the process addresses his own complicated inheritance-—the ways in which his father’s long-term imprisonment shaped his childhood; his fierce love for his three daughters and inability to protect them from heartbreak; the difficulty he finds in entering into another language and life. In these wide-ranging essays, Katrovas examines the nature of freedom, the artist’s role in society, and the impossibility of ever really knowing someone, all with wit and wisdom. This is a wonderful collection.” —Christopher Merrill, The Tree of the Doves: Ceremony, Expedition, War

“The freshly written, deeply felt essays in RAISING GIRLS IN BOHEMIA, were fascinating when first published individually in literary magazines. Richard Katrovas vividly conveys the complexity of the relationship between a father and his bilingual daughters who are being raised as citizens of two very different cultures. But to read these essays together adds a welcome sense of an overarching narrative, and dials the level of complexity higher still. The result is a vital, one-of-a-kind book” —Stuart Dybek, I Sailed with Magellen

“Speaking from first-hand knowledge, I can say that Richard Katrovas is an exemplary parent, friend, and colleague, generous, tough-minded, invigoratingly opinionated, and tender-hearted.  As a writer of prose and poetry, he is simply an international treasure.  All of these qualities are on display in Raising Girls in Bohemia, a wide-ranging collection of essays that speaks not only to fathers, daughters, and Bohemians both upper and lower case, but to all of us who matter to each other.” —Arnold Johnston, The Witching Voice: A Novel from the Life of Robert Burns

“At once deeply personal and strikingly erudite, Richard Katrovas’ RAISING GIRLS IN BOHEMIA is a remarkable achievement.  In every piece the voice is authentically his, whether describing episodes from his exceptional life story, pondering the intricacies of fatherhood, or sidling into rumination on subjects as far-reaching as the role of art in society, the horrors of prison or the disparate ways we experience connection to past and homeland.  This potentially random collection of essays is a true memoir and a satisfyingly thought-provoking read.” —Elise B. Jorgens, Dean, College of Arts and Sciences, Western Michigan University (retired)

“In these trenchant essays, Richard Katrovas strips away the gauzy romanticism of expatriate life to probe the challenges of raising three Czech-American daughters in a culture he cannot fully embrace – and that can never fully embrace him in return. In sweeping, meditative arcs, the essays roam from the author’s own complex relationship with his incarcerated father to his struggles with the language and customs of Prague, turning always on the axis of his profound love for his daughters. A must read for anyone interested in the literature of expatriation.” —Robert Eversz, Gypsy Hearts

“If, as Socrates told us, the unexamined life is not worth living, Richard Katrovas demonstrates amply in RAISING GIRLS IN BOHEMIA, that a life considered rationally, and with sensitivity, reveals insight both triumphant and heartbreaking. This is a fascinating book. In these essays Katrovas proclaims unceasingly that the lives of his beloved daughters—indeed all of our lives— are not problems to be solved, but rather mysteries to be lived.” —Gerald Costanzo, Regular Haunts; director, Carnegie Mellon University Press

“In RAISING GIRLS IN BOHEMIA, Richard Katrovas tells a unique story of how his own rootless childhood in the U.S. led him eventually to have roots in two continents as the loving father of three daughters born in Czech Republic. Though he reminds the reader often of the unusual twists and turns of his early life – Dickensian barely describes it! – by the end of this book, he has in fact told the story of his generation, especially the men of his generation. The final essay, “Glenn Beck Is Not My Brother,” is the best I know about the heartbreaking divisions in American society today.” —Mark Jarman, Bone Fires: New and Selected Poems

“Sometimes a person is in the right place at the right time to witness history, which is lucky.  Sometimes that person is a writer of Richard Katrovas` talent, which is even luckier.  These 23 essays reflect on a world bent on transforming itself, gazed through the transformative eye of fatherhood.  From his unique position–one foot in the Bohemia of the French Quarter, one in, well, Bohemia, Katrovas speaks with humor and authority, whether describing the `Worst Restaurant in the Western World,` or realizing that ‘My daughters are more physically free in Europe, and more rhetorically free in America.’ RAISING GIRLS IN BOHEMIA is a clear-eyed, sure-handed, big-hearted book.” —Beth Ann Fennelly, Great with Child

Past Praise for Richard Katrovas

“Tough, direct, gritty, full of wonder…there is nothing meek about Mr. Katrovas…He sings with an authority that is guided by compassion, by an unblinking eye for what is beautiful within what is not.” —New York Times Book Review

“Richard Katrovas is the best of the new poets.” —Denis Johnson, Tree of Smoke

“Richard Katrovas is a fine writer…He makes the (reader) feel gratitude, and, in addition to illumination, friendship.” —James Dickey, Deliverance

“As Hemingway portrayed Paris of the twenties, Katrovas portrays…post-revolution Prague. Katrovas is a talented and honest writer who captures the unrenderable, sees the invisible, and makes the truth into poetry.” —Arnost Lustig, Prayer for Katerina Horowitzowa

The recipient of numerous grants and awards, Richard Katrovas is the founding academic director of the Prague Summer Program, and is the author of seven collections of poetry, a short story collection, a novel, and three memoirs. Katrovas taught for twenty years at the University of New Orleans before moving to Western Michigan University. Katrovas lives in Kalamazoo, Michigan; New Orleans, Louisiana, and Prague, Czech Republic.