↓
Home→Books and Authors→RAY BY RAY: A Daughter’s Take on the Legend of Nicholas Ray by Nicca Ray
Share This! 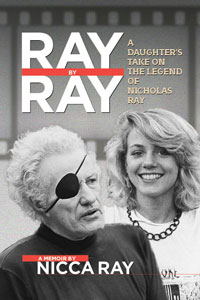 “Nicholas Ray invented the meme of teenage anguish. His daughter Nicca lived it. The first miracle is that she survived. The second is that she created this beautiful, heart-breaking book, in which she maps the intersecting arcs of her life and her father’s, creating a dazzling geometry of self-creation and self-destruction.” —Peter Trachtenberg, author of 7 Tattoos and Another Insane Devotion

Nicholas Ray was cinema. He was an innovator, and as director of such classic as Rebel Without a Cause he was a force that dramatically changed the Hollywood landscape. He was also Nicca Ray’s dad, Nick. After he disappeared from her life in 1964, Nicca began to imagine her father as a hero who would return and whisk her away from a life in LA where she never felt safe. However, the man who reappeared in 1974 was not the legendary figure she dreamed of.

Through his movies and letters along with her intimate interviews of family members and Hollywood icons, Nicca stitches together the seemingly disparate pieces of the real Nicholas Ray. A man so devoted to his craft he insisted on spending the last hours of his life surrounded by a film crew. A man who lost everything to drugs and gambling. An absentee father she longed for connection with.

Both well-researched and deeply personal, Ray by Ray: A Daughter’s Take on the Legend of Nicholas Ray unravels the lives entangled in Nick’s, including those of Gloria Grahame, Dennis Hopper, John Houseman, and the Ray family itself. Nicca tracks her father’s whereabouts during the ten years he was missing from her life and works to reconcile his artistry with his persona. In discovering the truth about her father, she navigates her own path beyond the shadows cast by the Golden Age of Hollywood and into her own life. An essential new perspective on Nicholas Ray, Ray by Ray redefines this legendary figure through the eyes of a daughter searching for her father.

In Ray by Ray: Nicca Ray recounts growing up the child of Hollywood royalty and fills in the blanks it left by interviewing those who knew the renowned director best: the stars of 50s Hollywood fame. An essential new perspective on the legendary Hollywood director of Rebel Without a Cause by Nicholas Ray’s daughter and namesake Nicca which examines his genius and demons, unraveling myths to illuminate who he really was, what drove him to create, and who, now, is Nicca Ray?