↓
Home→Books and Authors→Last Boat to Yokohama: The Life and Legacy of Beate Sirota Gordon
Share This!

Last Boat to Yokohama:
The Life and Legacy of Beate Sirota Gordon

by Nassrine Azimi and Michel Wasserman 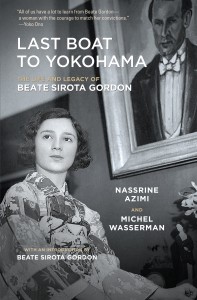 “All of us have a lot to learn from Beate Gordon—a woman with the courage to match her convictions.” — Yoko Ono

“A splendid book. You must get a copy of LAST BOAT TO YOKOHAMA for yourself. I will not lend mine.” — Dick Cavett, talk show host, actor and writer

“What [Beate] did as a woman in helping to create Japan’s new constitution is historic. Few women of the 20th century have had her courage and vision.” — Robert Wilson, experimental theater director and playwright

In 1946, a remarkable woman secretly helped create Japan’s new constitution, contributing a revolutionary article, which stated: “All of the people are equal under the law and there shall be no discrimination in political, economic or social relations because of race, creed, sex, social status or family origin.” Few could imagine that these words were the work of a then twenty-two-year-old Vienna-born, naturalized American of Ukrainian-Jewish descent who had grown up in Japan. Her name was Beate Sirota, and she remains an idol for generations of Japanese women to this day. Moreover, her remarkable early-life achievement with the constitution was followed by four decades of trailblazing cultural work, bringing authentic Asian music, dance and theatrical performers to the United States—often for the first time ever—thus bridging East and West through art.

LAST BOAT TO YOKOHAMA offers an in-depth look at the world from which the singular Beate came, with detailed discussions of her father, the world-renowned classical pianist Leo Sirota, personal diaries from the World War II era by her mother, Augustine, as well as a penetrating review of Beate’s early and later life, including never-before-published interviews between the authors and Beate. The book also examines the effect of Beate’s work on the constitution, including a timely study of Article 9—the “peace treaty”, as well as articles mandating women’s equality. Additionally, the authors detail Beate’s impact on American culture through her dedication to introducing authentic music of the Far East, influencing a broad range of contemporary cultural figures including David Byrne, Peter Sellars, and Robert Wilson.

“The story of the life of Beate Sirota is an inspiring one, and one that continues to inspire long after she has left the room. She set an example for all individuals, regardless of gender or nationality, that one person — however modest, however unprepared for history — can make a difference.” —Roger Pulvers, The Japan Times

“Nassrine Azimi and Michel Wasserman pay tribute to Beate Sirota Gordon, champion of the arts and part of the American team who developed Japan’s postwar constitution under General MacArthur. . . . LAST BOAT TO YOKOHAMA gathers respectful reflections that shed light on a specific moment in history and on one woman’s remarkable career.” —Foreword Reviews

Nassrine Azimi co-founded and now coordinates the Green Legacy Hiroshima (GLH) Initiative, a global campaign to plant seeds and saplings of trees that survived the atomic bombing of Hiroshima throughout the world. In 2003, she established the Hiroshima Office for Asia and the Pacific, United Nations Institute for Training and Research (UNITAR), serving as its director until 2009. Azimi has written and published extensively on UN peacekeeping, post-conflict reconstruction, and environmental governance. She lives in Hiroshima, Japan.