↓
Home→On Tour→Why Bukowski? 15 years in, Three Rooms continues to celebrate the life of the controversial poet 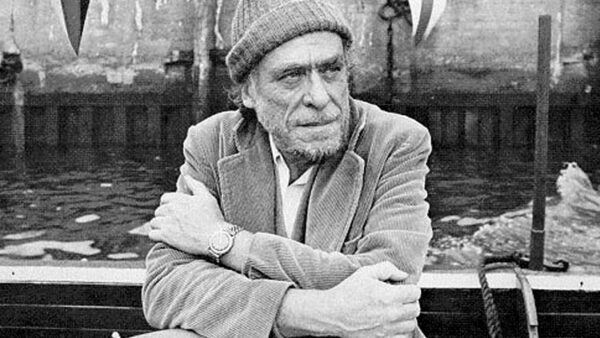 Bukowski is the author of six novels, 29 poetry collections (and counting), 11 short story chapbooks and collections, and several non-fiction books (both by and about him). He is the subject of Barbet Schroeder’s four hour film The Charles Bukowski Tapes and wrote the screenplay of Schroeder’s film Barfly (starring Mickey Rourke and Faye Dunaway). With all this work to his credit, he’s been widely imitated, but even more widely denegrated, as James Altucher wrote in the Huffington Post,

Charles Bukowski was disgusting, his actual real fiction is awful, he’s been called a misogynist, overly simplistic, the worst narcissist, (and probably all of the above are true to an extent) and whenever there’s a collection of “Greatest American Writers” he’s never included. And yet… he’s probably the greatest American writer ever.

More than almost any other writer, Bukowski rips the facade off American life to show a raw, often hidden truth. His prose and poetry speak of a life of poverty, where hope is a lucky day at the racetrack and wisdom is refusing to work eight hours a day for exploitative bosses; where loneliness is the normal state of affairs, made endurable with liquor and moments of love; where all elements of society dig and dig at you in an attempt to rid you of the shred of dignity you possess; where the rich run the world more than any political party, and death is an ever-present reality that should lead to love but doesn’t. 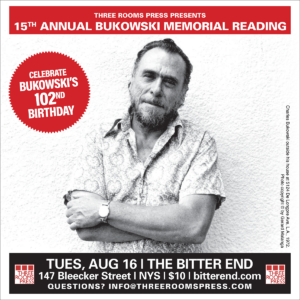 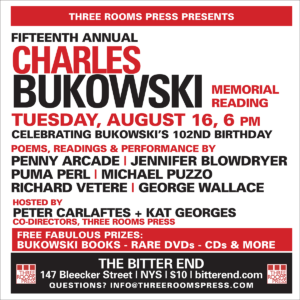 If you’re unfamiiar with Bukowski, 3RP’s Peter Carlaftes suggest you start by reading Factotum, Bukowski’s second novel and prequel to Post Office. For books, Kat Georges suggests The Days Run Away Like Wild Horses, which includes her personal favorite Bukowski poem, “A peom Is a City.” Watch Georges’ poe-film of this poem here.

For a great overview of Bukowski, complete iwth manuscripts, timeline and form, be sure to visit https://bukowski.net/.

And for an interesting article about the root sources of the controversy surrounding Bukowski, read Linda Caroll’s powerful recent article, “Why People Say Bukowski Was a Disgusting Abusive Lowlife Jerk” here.

Most importantly, please join us for our in-person event. And be sure to reserve your ticket (and table!) early here.