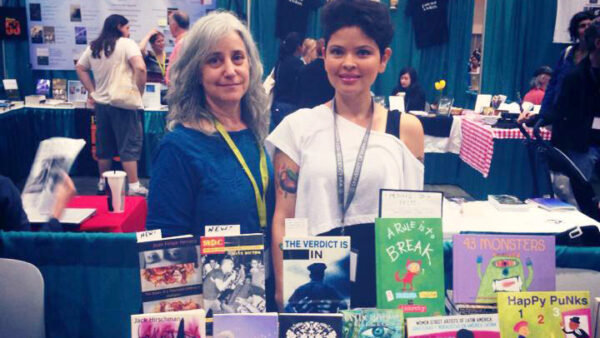 San Francisco-based Manic D Press has a long history of publishing radical, beautiful, necessary works of poetry and prose for adults and children. Intersectional before the word was in common use, Manic D has published more than 100 books which have been honored with numerous awards over the years. The wizardess behind this one-of-a-kind indie press is the irrepressible Jennifer Joseph, a long-time friend and inspiration to Three Rooms Press co-directors Kat Georges and Peter Carlaftes. Her efforts over the years have kept a solid spotlight on the important, progressive, sometimes controversial titles, and we are thrilled to feature Manic D in our latest Indie Publisher Spotlight, with an interview of Jen Joseph by Kat Georges, plus rare, select photos from the Manic D archives, including, above: Publisher Jennifer Joseph and Manic D author Myriam Gurba (Dahlia Season and Painting Their Portraits in Winter) at the AWP (2016).

KG: First off—the name: Manic D Press. Still one of my favorite indie press names of all time. Where did it come from?

JJ: Manic D was launched as a creative project in 1984 when I was 23 years old, and I had a sophomoric sense of humor. I loved presses that had clever names, like Permanent Press and Toothpaste Press (Allan Kornblum’s first project that evolved into Coffeehouse Press). I read somewhere that poets have a higher incidence of bipolar disorder than the general population, so it seemed like Manic D Press was a fitting name for what started out as a poetry press. 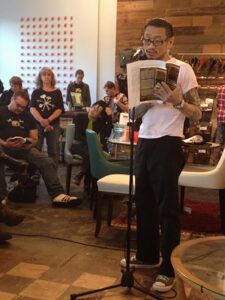 Justin Chin reading from 98 Wounds at the Manic D anniversary LitCrawl event (2011?). Jennifer Joseph is in the background, left.

KG: Sophomoric … or genius? The name is so memorable. Which leads me to the question that probably should have come first: What inspired you to get into publishing? and what has kept you going in this very challenging field?

JJ: The first Manic D book was my own poetry book, The Future Isn’t What It Used To Be, which I published after being informed by a well-known NY literary agent that no one was publishing poetry books these days, that manuscripts were read by the marketing department before the editorial department, and that Shakespeare probably couldn’t get published by a NY house. This was forty years ago, so things haven’t changed much. I decided after the first Manic D project that I enjoyed creating books, so I listed Manic D in a bunch of places like the International Directory of  Small Presses and Little Magazines and started receiving manuscripts from other writers. What has kept me going is that I continue to have interesting projects show up, and I’ve been fortunate in that books that I think should be in print, other people seem to like reading, too.

KG: Jen, you and I worked together on The Verdict Is In, a poetic response to the Rodney King verdict and subsequent riots in LA, San Francisco, and more. This book still seems relevant in light of the ongoing cases of police brutality across the country. What kind of response have you received for it over the years?

JJ: The Verdict Is In was a breakthrough project in many ways. Your editorial work was brilliant, as you were motivated and fearless in soliciting work from some of the most respected living writers of that time, including Allen Ginsberg, Charles Bukowski, Hubert Selby Jr, and Wanda Coleman, among others. We published that book in record time, and it was one of the first in the marketplace after the riots. The topic of police brutality is perennial, and getting worse every day as the divisive political tactics of disinformation, local police militarization, mass incarceration, media collusion, and an illegitimately appointed Supreme Court limit individual rights on a seemingly daily basis. Also, The Verdict Is In was the first Manic D book to be reviewed in a national daily newspaper (The Washington Post) and was designated a banned book by The 700 Club, Pat Robertson’s talk show on the Christian Broadcasting Network, so it as relevant today as it was when first published. 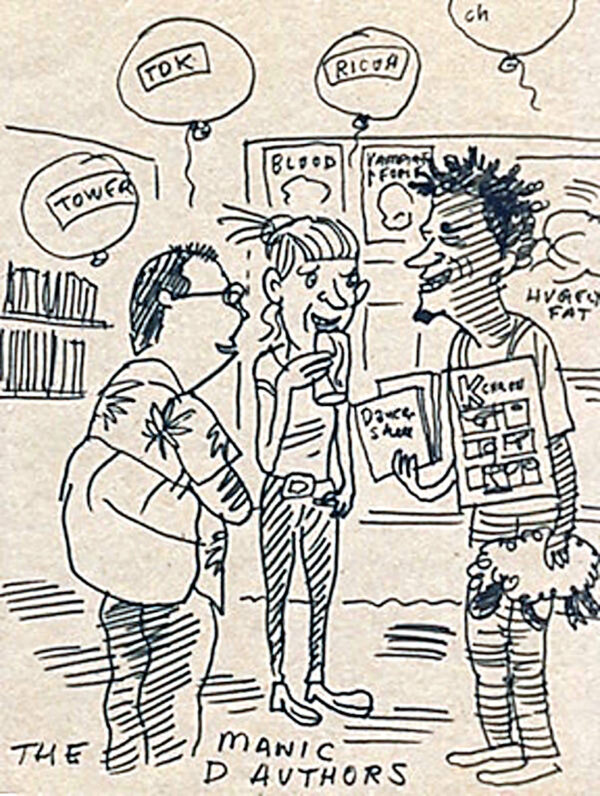 KG: After starting with poetry, you evolved to publish a range of books, still including poetry, but also novels, short story collections, memoirs and children’s books. Describe some of your favorites from the past and what kind of response you’ve received to them.

JJ: I can’t pick a favorite, but there are a lot of swell stories that some have created, like the anthology, Signs of Life: Channelsurfing through ’90s Culture (1994) that’s overdue for a re-release. That book underwent a censorship fight in Ohio, where some conservative citizens tried to have it banned from a local library, but the librarians stood up for the book and its literary merits, and won the case so the book stayed in the library. David Byrne bought a copy at the Institute for Contemporary Art in London, and wrote Manic D a fan letter, so that was just a wee bit awesome. Broadway writer/director Elizabeth Swados got a copy of the book, and at a Harvard artist-in-residence gig, she turned Kurt Zapata’s story about the poet’s brawl one night at the Paradise Lounge into an opera libretto that was performed by Harvard students. We have a cassette tape of that performance in the Manic D archives.

KG: That’s a look of attention for a short story collection. And I have a story in that book, which makes it even cooler! What else?

JJ: When Manic D published the children’s book A Rule Is To Break: A Child’s Guide to Anarchy by John & Jana a month before Obama’s re-election, one of the conservative Republican Tea Party websites wrote how horrible it was that a children’s book was endorsed by “terrorist and friend of Obama” Bill Ayers so we jumped on that and got publicity for the book all over the world. This title has now been translated into a dozen languages, including Polish, Danish, Korean, and Hebrew. Anyhow, lots of stories. Also, lots of gratitude that the books have been so well received by readers all over the world.

When Manic D published the children’s book A Rule Is To Break: A Child’s Guide to Anarchy by John & Jana a month before Obama’s re-election, one of the conservative Republican Tea Party websites wrote how horrible it was that a children’s book was endorsed by “terrorist and friend of Obama” Bill Ayers so we jumped on that and got publicity for the book all over the world. This title has now been translated into a dozen languages, including Polish, Danish, Korean, and Hebrew.

KG: Describe some of the challenges of being an indie press today, and how you’re dealing with them.

JJ: Ugh. Things suck worse than ever. It’s taking three times longer to print books in the traditional offset way. The cost of printing has increased astronomically, as have shipping costs, yet are people willing to pay $20+ for a paperback? I dunno. Amazon sucks for publishers, with their bullshit chargebacks and so-called promotional fees. The traditional ways of promoting new books, like book reviews in newspapers and magazines, has gotten somewhat irrelevant since the majority of the population doesn’t read print media. People may still be reading books, but how do they find out about new books? It changes all the time and is exhausting to keep up with.

KG: As a fellow indie publisher, I can totally relate to these challenges. So let’s move on to something more fun: You’re hosting a dinner party to sign any author of the past to your press. Who do you invite? And what do you serve?

JJ: I’d probably invite Homer because the Odyssey and the Iliad have stayed in print pretty much since the printing press was invented. I’d serve a good Pinot Noir, grilled lamb chops with oregano and lemon, rice, and artichokes with garlic, so the food would be familiar to my guest. You’d be invited, too. And maybe Patti Smith.

KG: Thanks for the invite! Accepted. Well, we could talk forever, but for now, what are some upcoming titles we should know about?

JJ: New from Manic D is a great summer read, a rocknroll murder mystery, Merch Table Blues: A Novel by Peter Conners, about a guy who drops out of a grad school creative writing program to go on a small-club tour as a roadie/merch table guy with his childhood buddy who’s now the guitarist/lead singer in an up-and-coming rock band. Memorable characters. Sex, drugs, and rocknroll. Upcoming is Jon Longhi’s The Shadow of My Heart: Notes from a New Dad, which contains warm recollections of experiencing a new kind of unexpected joy when becoming a parent, a departure from Jon Longhi’s previous books, which are hilarious, absurdist fiction. Also upcoming is Solidarity Is Sweet: A Coloring Book of Sweets, Recipes & Intersectional Feminism for Relaxation by Rufina Jinju Kang. This title was delayed because of the pandemic, but it is more important now than ever, with the recently revealed draft of the insane Supreme Court decision to reverse Roe v. Wade, which has been the law for 50 years. Onwards!