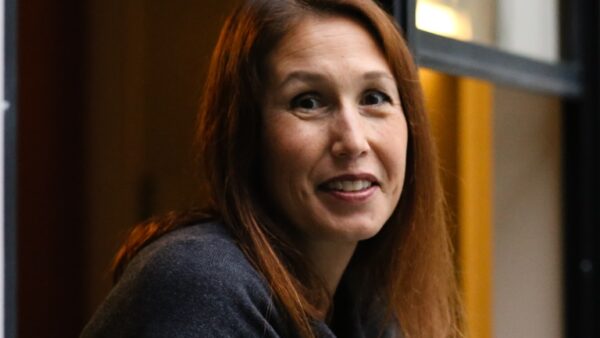 Three Rooms Press is delighted to have Sarah M. Chen as our May Spotlight Author. Sarah was born in British Columbia to a Chinese dad and Canadian mom, and moved to the US when she was young. She has published over 30 short stories—and edited numerous anthologies including Avenging Angelenos, The Swamp Killers, and The Night of the Flood—and doesn’t see herself quitting the short story format anytime soon. Sarah is joined in conversation by 3RP co-director Peter Carlaftes.

Peter Carlaftes: I really enjoyed working with you on THE FAKING OF THE PRESIDENT. Your story “In Mother We Trust” was so far out there with Mike Pence trying to get Trump out of office so he can take his rightful throne—that is, it feels closer to the truth or at least a distinct possibility than most anything else around. Beyond living through the last administration, what inspired you to create this scenario?

Sarah M. Chen: I knew I didn’t want to write something historical so I liked the idea of setting it in the near future. I’ve always chosen contemporary settings so this was a little bit different for me, but I had a blast writing it. I chose a Pence presidency because I had wondered what would be worse, Pence or Trump in office. With Pence, you get more predictability, but we’d be sent back to the Dark Ages with abortion restrictions and book banning. Although, unfortunately, we’re already at that point.

By writing it from Karen Pence’s POV, I thought it gave the story a fresher angle with a strong female protagonist. I liked the idea of having Karen be the real decision maker where she takes it upon herself to do whatever it takes to put her husband in his rightful seat in the White House. This despite Trump insisting the election was fraudulent and he would remain in office indefinitely. I read everything I could about the Pences and their marriage. Much more than I wanted to know.

I also wanted to work in a Calexit angle where people are pushing to have California secede from the country. I added a second female POV with Addison, a trusty fixer for the governor of California, who is tasked with investigating the hacking of pro-Calexit servers. Eventually, the two storylines intersect resulting in the reluctant teaming up of two very different but determined women.

PC: Well, like I said, “In Mother We Trust” read like more scary news from the headlines. Can you tell me about your latest project A BAG OF DICK’S?

SC: Colin Conway asked me to contribute a story to his latest 509 crime anthology series. 509 is the area code for the eastern portion of Washington State, which includes Spokane. The premise was that if someone brought a certain detective information on what was being smuggled in a “Dick’s” bag by a specific time, they would earn a “get out of jail free” card. Dick’s Hamburgers is an iconic burger joint in Spokane. Each contributor wrote a story from the POV of someone chasing this bag and wanting amnesty for the crimes they may have committed. The rules of the game could change depending on who was telling it, similar to “telephone” where information is passed down from person to person. The only constant was that there must be a fast food bag. I thought it was a fun concept and immediately thought of a young woman who’s caught between her charming deadbeat boyfriend and her reformed criminal father.

PC: And where does your burger tale take place?

SC: It takes place in Spokane, Washington. I’ve been to Seattle numerous times but never Spokane. What’s funny is that there is a Dick’s Burgers in Seattle, but it’s totally unrelated. On my next visit to Seattle, I may have to make a side trip to Spokane to check out these burgers. Apparently, it’s an iconic place and has been around since the fifties. The burgers are cheap and you can order them by the bagful, hence the anthology title “Bag of Dick’s.”

PC: How about THE SWAMP KILLERS, the anthology you co-edited with the talented E.A. Aymar? What was that all about?

SC: This was also a somewhat similar concept where misinformation is the underlying thread connecting all the stories. We started with a fictional organized crime family based in Atlanta. The daughter runs away with a lowly underling and the family matriarch puts a bounty on his head which sets off a chain of events leading everyone to Jacksonville, Florida. It was sort of our follow-up to The Night of the Flood where it was the same “novel-in-stories” concept with most of the same writers. However, this was a little more experimental and inspired by the idea that what you read may not be the way things actually happened. We wanted to have fun with this anthology and try something different.

PC: Oh wow! And how could I forget your contribution to 3RP’s MAINTENANT 15: A Journal of Contemporary Dada Writing and Art. Yours was a written piece.

SC: I’d never written anything remotely like this and Dada wasn’t something I thought I had any business attempting. But when I learned the theme was rebooting humanity, it triggered something in me. I had to channel all that frustration and anger of the past two years, actually since 2016, and this felt like the perfect opportunity.

I thought about how we’re doomed as a species if we can no longer agree on the same set of facts. People use words so carelessly and thoughtlessly, and that’s when I realized who was telling this story. It’s from the perspective of “words” who have had it with being abused and twisted to suit whatever misguided dangerous agenda someone is pushing. 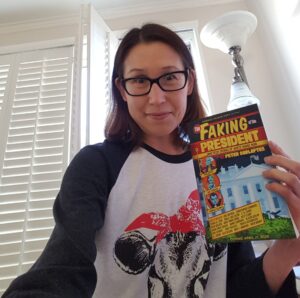 Sarah M. Chen holding THE FAKING OF THE PRESIDENT, which features her story “In Mother We Trust”

PC: One of the most intriguing aspects of your life is working as a private investigator’s assistant. You must’ve had a few scary encounters or at least some that were strange. Could you tell me your favorite story of that part of your life outside writing?

SC: Working as a private investigator isn’t very interesting and is a lot less glamorous than it sounds. Most of it was doing computer work like background checks and going to courthouses to pick up case files. My least favorite part of it was tracking down people who didn’t want to be found or serving subpoenas. I’ve done things I probably shouldn’t have, like go through someone’s mail in their mailbox to see who lived there.

Most of our cases involved tractor-trailer accidents and cargo thefts. One interesting case that I recall several years ago involved a stolen trailer and cargo. The trailer was recovered on the side of the road and I was sent to take photos of whatever cargo remained inside. It turned out none of the cargo was stolen because it was racks and racks of seventies-style costumes like sequined shirts, feather boas, and bell-bottomed jumpsuits. I guess the thieves were probably really disappointed when they opened the trailer and discovered what was inside. We learned later the cargo was actually costumes for Barry Manilow’s tour.

PC: And what’s on the horizon now for Sarah M. Chen?

SC: I’m currently revising a YA thriller. My third draft. I wrote it during the pandemic and queried it last year with some interest but ultimately they were all passes. A couple agents gave me some helpful feedback so now I’m back to the drawing board with it. I decided to start the entire book over from scratch which is probably not the smartest thing to do but I’m hoping it’ll be worth it. Once that’s done, I’m eager to work on something else. I have a few other book ideas including, of all things, a YA rom-com.

As far as new publications this year, my story “Riviera Red” will be out mid-May (soon!) in LOW DOWN DIRTY VOTE, Volume III edited by Mysti Berry. I’ve also got a short story called “A Family Matter” in Witnesses for the Dead, an anthology of stories which puts witnesses to crimes and injustices front and center. It’s edited by Gary Phillips and Gar Anthony Haywood with Soho Press. That comes out in the fall, I think.

PC: Well I’ll all be waiting to read those new stories, and for you and I to be back to work on another project soon.

You can find Sarah’s recent work in the anthology A BAG OF DICK’S, as well as her most recent anthology as co-editor (with E.A. Aymar), THE SWAMP KILLERS. And don’t forget to pick up a copy of THE FAKING OF THE PRESIDENT to read Sarah’s Trump/Pence Nightmare “In Mother We Trust” yourself.

For all things Sarah M. Chen, please visit her website at https://sarahmchen.com.