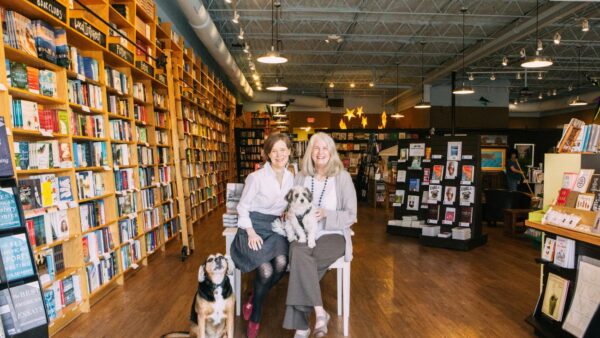 Amid phone calls, background chatter, and the occasional barking of a dog, bookstore owner Karen Hayes sat down to talk a little bit about Parnassus Books and its continued success as an independent bookseller in the Green Hills area of Nashville, Tennessee. We discussed the origins of the store, more of which can be found on this link, and the store’s notoriety thanks to the success of her business partner, bestselling author Ann Patchett (The Dutch House, Commonwealth). Despite an increase in online shopping, a pandemic, and the construction of an Amazon warehouse and storefront in Nashville, Parnassus has had continued success. Their friendly shop dogs, bustling children’s section, engaging events, and commitment to supporting local authors will continue to inspire the love of books amongst Nashvillians for the foreseeable future.

First off, can you talk a little bit about the origins of the store? I read that you used to work for Random House, and you clearly have a love for books, but what was the initial push to start a bookstore?

KH: Yeah, actually I started working for Ingram in 1978 and was there for about 12 years and then I left the book business for a very short time, and when I got back I started to as a rep for Harper for a short time again and then Random House, and then worked with them for 18 years, most of that time calling on independent bookstores.

Davis-Kidd was here since the early ’80s, for about 30 years, and I never thought about opening a bookstore since they were here, plus the fact that independents kept going out of business, ever since the ’90s. It looked like a really tough thing to do, to start a bookstore. There weren’t young people getting into the business, for the most part, it was kind of a sad period for Independents. When Davis-Kidd announced they were closing, I had kind of hinged my position at Random House and wasn’t real thrilled with where it was going, and I thought maybe an independent bookstore would be a good choice. I looked around and I saw that the ones that have lasted for decades, actually, like Carmichael’s, Lemuria, Square Books, Malaprops, they all were smaller stores that really fit their neighborhoods and they were able to survive chains and all that stuff, so. So I just thought well, if I open a small neighborhood bookstore, maybe that would work. So that’s what I started exploring and started to talk to people in town. Somebody introduced me to Ann, and I showed her my business plan, and we just kind of agreed over lunch to become partners. I was only expecting someone to help me finance the store.

What do you think makes Parnassus stand out as one of those bookstores that’s able to stand the test of time?

KH: When Davis-Kidd closed, it had been bought ten years prior by another small regional chain that was very similar to Davis-Kidd, but he just kept growing that chain and he was extending himself way too far. The stores were becoming bigger and bigger in a time when it was really hard to compete with Amazon in terms of selection. Some of the stores still had CDs, and it was just really hard for a large store to continue to stay open, and that’s why they failed. Like I said, when I looked around saw all the bookstores that had lasted, they were smaller, and they knew their neighborhood, and that’s why I felt pretty confident about opening the store and that’s why we’ve survived. We started at 2500 sq feet, and we’ve doubled to 5000. We’re employing 30 booksellers, about half of them are part-time. We’re making a living and it’s all good.

How would you describe the interactions between Parnassus and the community in Nashville and Green Hills, and how is your relationship with your customers? Do you have a lot of recurrent customers?

KH: We were lucky to find a place in Green Hills, which is where Davis-Kidd had been for decades. It’s a shopping community here, there’s a main mall for the city with kind of high-end stores and several shopping centers in this area. So it made sense for it to be here. We do see regular customers all the time and what we love about this area is there are lots of families and our children’s section is really the heart of the store and parents love bringing their kids here. We’ve got a lot going on. The kids and the parents love seeing the shop dogs, and we love seeing them. Our customers are the reason we’re here, we try to establish really wonderful relationships with them. But, we also get a lot of tourists, because I have a high profile partner, and I’m very lucky in that. A lot of people have heard of us outside of Nashville and make a trip from downtown because they want to see the store and there are even people who will make a detour from their trips to come down and see the store. We get tourists probably every day.

Wow, that’s pretty incredible! Could you describe a little bit more about Parnassus’s stance as an independent bookstore and your relationship with indie publishers?

KH: Several of my Staff Recommends this year are independent. Spring, I chose Nives by Sacha Naspini, which was published by Europa, a quirky little novella that was published in Italian. Spiegel and Grau has become an independent imprint outside of the Random House imprint, Fox and I was one of our picks, which is their debut nonfiction memoir. Groves did King of the Blues by Daniel de Vise, which I really love, it’s about B.B. King. Something Wonderful by Jo Lloyd was published by Tin House, that one was really wonderful. We love university presses as well, the University of Texas has really great books, and our local Vanderbilt Press will often do things locally based, which is great. We work a lot with self-published authors, too, because a lot of those are local authors that are publishing their own books, and we really want to represent those books, so. We do have them on our shelves, and we don’t segregate them. Local authors do have their own section and a lot of those are self-published, but not always.

How has the pandemic impacted Parnassus, short-term and long-term? Any new traditions arising, or old ones returning as we transition back to normality? Are your author events mainly in-person now?

KH: We’re doing both online and in-person events. We limit audiences to 50 people in store, and we’re keeping everybody masked. We’ll set the author up on stage to separate them from the audience. We’re still doing virtual events as well, and the thing that impacted us the most was that we were shut down in terms of customers coming into the store. We started doing curbside pick-up after a while, but had to shut that down after a while. We just switched to online recently, and we were able to do it by turning the store into a shipping center. In the middle of the store, we put together all the packages. We were able to keep all of our employees by getting a PPP loan, even if they were uncomfortable coming in. Once it was over with, we were able to bring them all back in. It took a little while to open back up because we were still getting a high volume of online orders, and we were doing a lot of pre-order campaigns, which was fantastic, but they were really high volume. Hundreds of packages going out in such a short period of time, so it took a lot of space. We didn’t open up until last October, and we were limiting it because of the space in the store. We did finally take over some off-site office space down the street to act as our shipping center. So now it’s really great, because we can do our large volume shipments out of there. We have a huge first editions program subscription service that’s over 900 subscribers, so that’s a big mailing every month. Having the space gives us back our space in the store, and we can have off-site staff meetings there.

During the pandemic, we started doing more social media. We have 2 people who do our social media and marketing, and every Tuesday we do Lay-Down Diaries and have really stepped up during the pandemic, it’s a video and newsletter every week that talks about the new books coming out. We’re more regular on outreach and we’ve got a lot more customers all across the country and even internationally now.

What inspired the creation of Musing, your online magazine?

KH: Musing was founded by Mary Laura Philpott, who was our marketing director before she became a best-selling author herself. Steve Haruche is our marketing director now, and he still contributes pieces periodically to that. That’s how we put out our Staff Recommends every month and every once in a while a Shop Dog Diaries that Mary Laura used to write. It’s a very fun publication. Ann has another Shop Dog Diary coming out soon!

I remember from my own visits to the store you guys have a lot of shop dogs that each have their own specific job. Why did you decide to have in-store dogs, and what has it been like to work with dogs?

KH: Ann started bringing Sparky, her dog in, and other staff had dogs as well, so they started bringing them in. Actually, Mary Laura’s beagle, who was named Eleanor Roosevelt, came in one day and escaped through the front door, ran across a very busy street. Tristan, our buyer, was in pursuit chasing this dog down. Some have not made the grade and have had to stay home. One of our other buyers has a huge shaggy dog. At a certain point, that puppy’s slobber was getting all over everything, so even though it was a very sweet dog, it was just too much. We have, I think about 6 shop dogs that come in and out on a regular basis. They all get along and they get along with customers and everybody loves to pet and feed them. It really does help the mood of everybody. If you reach down and pet a dog and snuggle them, it always makes your day better.

What is your favorite memory during your time owning and managing Parnassus?

KH: There’s not one favorite memory. There’s been so many. Our first grand opening was huge and there was so many wonderful people going in and out, it was several thousand people going in and out of our tiny 2500 square foot store. But also events like Stephen King at the Ryman was just so much fun, so many happy people. John Prine came and did a fundraiser for his book about his lyrics and stories, so that was an intimate, lovely thing in the store. There’s too many wonderful memories to pick one.

Lastly, what are the best ways to support Parnassus and get involved?

KH: Buy books from us! Online, in-person, whatever. We’re happy to help, give suggestions, and that’s what we do. We’re also on Instagram, Twitter, and Facebook.