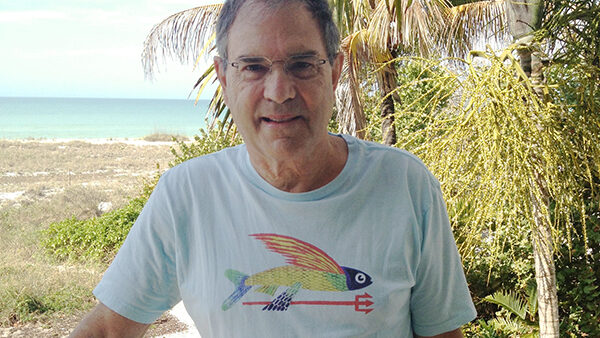 Stephen Spotte is a retired Marine Scientist and the author of more than twenty books, including four novels. His fifth, ANIMAL WRONGS, coming from Three Rooms Press in October, is an incredible tale set in a medieval courtroom where historical fiction intertwines with preposterous legal arguments. The air fills with bluster over animals, heckled and cheered by spectators, that have been put on trial for crimes against humanity.

Spotte deftly unveils a story of opposing attorneys facing off against each other in ever-more opaque, convoluted, and dilatory trials. By the end of ANIMAL WRONGS, Spotte uses his considerable, critically acclaimed storytelling skills to explore still-relevant theories on legal precedent, the church vs. the state, mankind’s place in nature, and animal rights.

Below, the author is in conversation with 3RP’s own Peter Carlaftes.

Peter Carlaftes: Having provided for the well-being of many different species of animals, what drew you most to the trials from Animal Wrongs?

Stephen Spotte: Starting in the late 1960s there was a growing belief among the hippies that certain species of animals—notably the cetaceans (dolphins and whales)—are unusually sentient and possess superior intelligence. Therefore, they should always be free. This was given impetus by certain charismatic people like John C. Lilly, a psychiatrist who used a captive dolphin named Peter to interact with Lilly’s research assistant, Margaret, in certain “bonding” experiments in a pool. It has long been suspected that these efforts at cross-species communication contained a sexual component (male dolphins are notoriously horny). Animal behavioral scientists trying to decipher how a species communicates with its own kind typically begins by recording their vocalizations, playing them back to other members of the species, and noting any correlation in the recipients’ responses. Lilly decided to skip this annoying and time-consuming step and go straight to teaching English to his dolphins, failing to note that cetaceans lack the requisite vocal organs necessary for human language. Lilly promoted the belief that cetaceans are aliens from space who came to Earth to teach us the ways of their advanced civilization based on love and peace, and he wrote an influential book titled Man and Dolphin detailing these thoughts. In proper medical terminology, he was certifiably nuts. He took lots of LSD, and we smoked weed on occasions when he and Margaret left California and came east to give speeches and schmooze with their fans. Even stoned I couldn’t understand him. His beliefs eventually went mainstream in the 1980s, when zoos and public aquariums came under intense scrutiny and criticism for “imprisoning” cetaceans for profit and making them perform undignified tricks before paying audiences. It reached a point where I and several other aquarium directors decided to hold a symposium at Shedd Aquarium in Chicago where we would invite our opponents and selected outsiders to discuss the issues rationally and then publish the proceedings. I was named co-chairman, and when invitations went out I omitted no one, scientist or crackpot. I invited a hippie who after public hours communed with our dolphins in Mystic, Connecticut, by playing his tuba to them. I invited a priest, a rabbi, a protestant minister; a professor of ethics; acoustical engineers from the Navy’s secret dolphin training facility in San Diego; animal behavior specialists; an astrophysicist who wrote on the possibility of alien life; animal rights activists including a former Army helicopter pilot shot down in Vietnam and hobbling on one leg. He was a thorn in my side, but we were friends. He confessed over beers of having joined PETA (which was started in Connecticut) mainly to meet chicks. My colleagues named me co-chairman of the Ethics Committee for this symposium—the very eye of the hurricane—and I started researching how animals had been treated by humans through the years for my opening address.

SS: I soon stumbled on a remarkable book by E. P. Evans published in 1906 and titled The Criminal Prosecution and Capital Punishment of Animals: The Lost History of Europe’s Animal Trials. Evans, an American independent scholar, had traveled through France and Germany in the 1890s searching archives of towns and cities for records of these proceedings during the late Middle Ages. He could read Old French and Old German, and what he put together is a well-documented summary of these events. From his book I learned about Barthélemy de Chassenée’s defense of some rats that devoured the peasant’s grain at Autun, France, in 1508. Evans wrote about other trials too, of pigs that ate untended babies, goring oxen, and homicidal horses. Although animals had no “rights” as such they nonetheless were charged with crimes against humans, assigned defense attorneys, made to appear in civil or clerical court (depending on their level in the earthly hierarchy), duly prosecuted, convicted, and punished. The verdict was always read to the defendants (human or animal) in Latin. In pruning my library a couple of years ago I came across Evans’ work and read it again. It was no less fascinating the second time. I then started a search for other works that impinged on the subject, invented Révigny as co-protagonist, and gave Chassenée his odd appearance, bad marriage, and criminal leanings. And so Animal Wrongs was born. 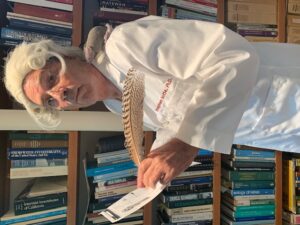 PC: Given your scientific background, please explore how this influences your approach to writing fiction.

SS: As a pure empiricist I view the world through the lens of science. I can’t help it. This no doubt explains why I could never be a connoisseur of art, music, or poetry. I see beauty and form in nature and in literary prose, nowhere else. Like Nabokov, I have no appreciation of music and find it annoying (interesting that his only child, a son, became a noted musician and conductor). I don’t understand poetry, and especially today’s poetry that seems to be prose with odd line breaks. Painting? Don’t even go there. One of my best friends, now age 90, is the renowned marine artist Keith Reynolds. We used to go fishing in upstate New York on the St. Lawrence River and while sitting in the rented boat with our lines dangling over the side take turns describing to each other the world as we perceived it in the moment. Keith’s visions of clouds, colors, and form were far different from mine. He told me that one class he took at art school had the students painting shadows throughout an entire semester. Me? I’m looking over the side wondering what the fishes are doing down there, remembering having just read a paper by George Lauder at Harvard about the vortex rings shed by the tail fin of a swimming fish and picturing his elegant equations modeling the hydrodynamics of turbulence and drag. Lauder referred to these invisible vortices (poetically, I think) as “fish footprints.”

PC: Philosophically speaking, How do your own feelings about good and evil and heaven and hell come to life through your two opponents, Chassenée and Révigny?

SS: I hold same ironic, sarcastic views about religion that I bestow on Révigny, my shapeshifting, scripture-quoting demon and Chassenée’s co-protagonist. I’m simultaneously enchanted and repelled by the blatant hypocrisy embedded in all organized religion. Even before the Aztecs and ancient Egyptians, deities were invented to explain natural phenomena and human traits. Layered between the gods and the masses a culture of priests inevitably arose, bestowed on itself enormous power, and claimed to be spokesmen for the divine beings putatively in charge and interpreters of their wishes. Millenniums have gone by and nothing has changed. Today you confess to a priest (Confession in Catholicism came about as a result the Fourth Lateran Council in 1215.) He relays news your sin to God, who relays back a message forgiving you. If it’s true that God sees everything, He already knew about your sin, making the priest redundant. During WWII my mother and her older sister took my cousin Larry and me (Larry is my senior by two months) to live with our widowed maternal grandmother while our fathers were in the military. This good woman, who chanted slogans while picketing against the evil of drink, tried to inculcate Larry and me with hillbilly religion, and by age four we could recite in order all the books of the Old Testament. I can still do this and when the evil of drink comes on me I occasionally perform it as a sort of party trick. Fortunately, none of her nonsense stuck. I’m an atheist and reject all superstition. As a scientist I view religious dogma as belief without evidence. The Bible is great reading, I’ll say that, and even now Revelation raises goose pimples on my spine.

PC: At this juncture in time, how does your perfect westward view of the Gulf of Mexico differ from the eastern view of the Florida inland.

SS: We old marine scientists are similar to old cowboys: we intend to die with our boots on; in my case, of course, rubber wading boots. I can’t not be near water, as I wrote in my My Watery Self: Memoirs of a Marine Scientist, published previously by Three Rooms Press. When happy, I immerse myself in the sea and rejoice; when depressed, I do the same except in sorrow. The ocean is my solace and inspiration. I understand its movements and sighs. Its protean voices speak to me. I can’t imagine living inland. Nothing beats sitting on the back deck watching a gorgeous sunset descend over the Gulf, its vibrant hues filtered through the bottom of a margarita glass.

PC: Animal Wrongs will be published October 19. What other projects does the future hold for Stephen Spotte?

SS: I’ve written a novella-length sequel to Animal Wrongs with the working title Mademoiselle Ambrosine. It’s about a comely young witch put on trial in the medieval French town of Magny-Cours and presided over by Institoris, the infamous inquisitor of that period who sentenced hundreds of so-called “witches” (mostly women, but also some men) to burn at the stake. Institoris was co-author of The Witch-Hammer, a kind of medieval user’s guide to identifying, pursuing, and prosecuting witches. It’s all in there, everything God’s soldiers needed to know. Ambrosine, however, really is a witch with astonishing witchly powers, and she isn’t intimidated by Institoris. He, on the other hand. . .well, you’ll have read the book. Chassenée, of course, is her defense attorney and Révigny prosecutes for the inquisition, although this time his heart truly isn’t in it. I mean, a demon prosecuting a witch? C’mon! Where’s the professional courtesy? I think you’ll like this tale. On another front, I’m currently doing research for a scholarly monograph on the bowfin (Amia calva), a fish indigenous to North America that miraculously has remained unchanged for at least 90 million years. The species is common in lakes and rivers of New York State, Florida, and everywhere in between, and this persistence through deep time has always delighted and puzzled evolutionary biologists. What special features have prevented its extinction? I’ve only just started.

PC: Thanks, Steve. You are a true renaissance man as any reader can discern from the feature photo. Haha. And if you the reader want to read a fantastic piece of historical fiction, you can preorder a copy of Stephen Spotte’s ANIMAL WRONGS here: