↓
Home→Contests→Giveaway: Enter to Win an Advance Copy of Our Spring 2021 Books!
Share This!

Start off the new year right by entering to win a free print advance copy of one of our three Spring 2021 books on Library Thing, with stories ranging from Vanessa Baden Kelly’s extraordinary essays diving into the meaning of “home” to a Black millennial woman in Far Away from Close to Home, Gina Yates’ brilliant and often humorous novel—Narcissus Nobody—of romance and independence, and Robert Silverberg’s collection of twelve imaginative, time-traveling short stories and novellas in Voyagers. Anyone can enter following the links below, good luck!

Far Away from Close to Home: A Black Millennial Woman in Progress by Vanessa Baden Kelly 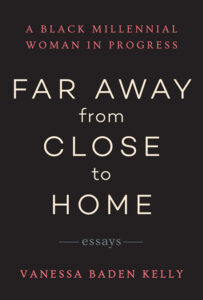 Through a series of extraordinary, incisive, often-humorous essays, Emmy Award-winning actress Vanessa Baden Kelly examines what the idea of “home” means to a Black millennial woman. What are the consequences of gentrification on the life of a young Black woman, and on her ability to raise a family? What does it mean to be part of a lineage, whether it be passed down through names or through the voices of generations of writers and thinkers? In these profound, intimate essays, Baden has found a space where she can work out thoughts and feelings she feels unsafe saying out loud. As she processes the initial ideas more fully, her essays evolve from personal stories to fully-realized communiques of a generation of Black women who are finding a new sense of both belonging and ostracism in private, work, and public life. What begins as a single rider on a Los Angeles public bus travels through a range of experiences and ideas: the interconnectedness of living in a majority-Black community in the Crenshaw district; the overwhelming grief and fear of watching young Black boys be buried while raising your own son; the miracle of finding love for love’s sake and love for one’s self when historical traumas have tried to rob that very idea from you. Underlying the theme of each essay are questions of how a Black millennial woman can find “home” anywhere when confronted with its invasion by police, men, and society’s expectations.
Author VANESSA BADEN KELLY is an Emmy-winning actress, Emmy-nominated writer, and producer. She began her career as a child, starring on Nickelodeon’s Gullah Gullah Island and Kenan and Kel. After departing entertainment, she began organizing in college, co-founding the Student Coalition for Justice (later the base for the Dream Defenders) and continued working in the field. To date, she has led campaigns for The Trayvon Martin Foundation, Community Coalition South LA, and various political campaigns including Obama for America ’08 and the Ndoum Presidential Campaign in Accra, Ghana. Additionally, she is an Ambassador for the RuJohn Foundation. Upon her return to Hollywood, Vanessa has become a successful television writer and producer, writing for shows such as TNT’s Animal Kingdom and Mindy Kaling’s HBO Max series The Sex Lives of College Girls. Vanessa originated the role of Journee as writer/star of the Issa Rae digital series Giants, where she is four times Emmy-nominated and one time Emmy-winning for Best Actress in a Digital Drama. Vanessa is mother to a human son, Ryder, and a dog son named Dude.
ENTER HERE: http://www.librarything.com/er/list#25880320

Narcissus Nobody by Gina Yates 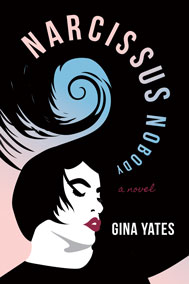 The voice of disgraced love guru Brooks Nixon seems to haunt Hope Townsend, showing up at inopportune moments to deliver unwelcome commentary on her hapless romances. Brooks―who once doled out cliched dating advice to millions―fell out of favor with his fanbase when a life-altering experience shifted his counsel to a free-wheeling, anti-monogamy platform. The about-face earned him the moniker “Narcissus Nixon” and made him slightly less annoying to Hope, a goth music devotee who prefers animals over people. Hope’s dueling traits of misanthropy and compassion often hinder her progress in jobs as well as relationships. Little by little, she finds herself more influenced by the new Nixon than she’d care to admit. To shake off his hold on her thoughts and come to terms with her own destiny, she must uncover the truth behind Nixon’s transformation and draw the line between his recommendations and her authentic desires. NARCISSUS NOBODY is a brilliant—often humorous—story of a woman who is driven to embody the free-wheeling independence of her feminist heroes, in the face of the more straight-laced suburban women in her community.
Author GINA YATES is the youngest daughter of the late celebrated author Richard Yates (Revolutionary Road), and with this novel, she makes her mark as a writer of sparkling originality.
ENTER HERE: http://www.librarything.com/er/list#25803926

Voyagers: Twelve Journeys Through Space and Time by Robert Silverberg 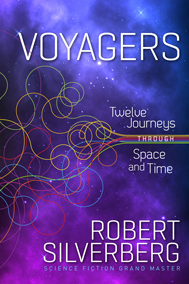 Every science-fiction story is a voyage of some kind—to a world of a far-off galaxy, to our own world of the distant future or the remote past, to some interior corner of the human soul. In VOYAGERS, Science Fiction Grand Master Robert Silverberg collects twelve of his finest short stories and novellas, all of which carry readers to the next level of imagination and into a new universe of the mind. This new collection spans 60 years of work by Hugo Award-winning Robert Silverberg, traveling from one end of the universe to the other, from the dawn of time to its final hours. A journey through its pages reveals time-travelers from the future come back to witness a catastrophe of our own time, Spanish conquistadores looking for—and finding—the Fountain of Youth, a tourist in Mexico stepping into an alternative universe, and spacefarers among the stars making a surprising discovery. The range of these stories, the kinds of voyages they describe, just begins to demonstrate the scope of science fiction, and the lengths the mind can leap. That’s the point of science fiction: to envision the unknown, the previously unexplored, the thing which is not.
Author ROBERT SILVERBERG is a giant in the science fiction genre, with four Hugo Awards and six Nebula Awards to his name. He was inducted into the Science Fiction and Fantasy Hall of Fame in 1999 and named a Grand Master by the Science Fiction and Fantasy Writers of America Guild in 2005. At present, there is a resurgence of interest in Silverberg’s short fiction. His short story “Needle in a Timestack” is being adapted for the screen by Oscar-winning writer John Ridley (12 Years a Slave) with expected release in spring 2021.
ENTER HERE: http://www.librarything.com/er/list#25880422
Share This!