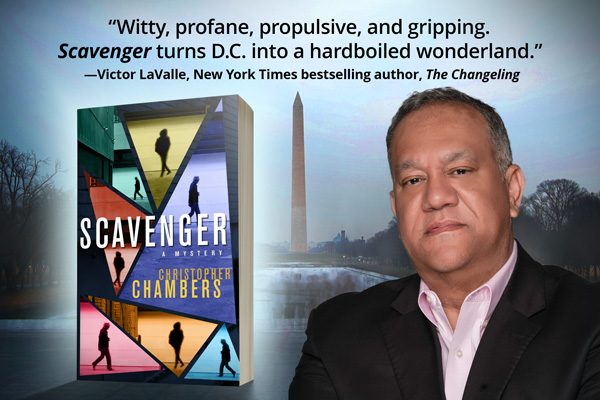 In his forthcoming mystery novel, SCAVENGER (978-1-941110-94-2, 356 Pages, Trade Paper Original, $16, October 13, 2020, Three Rooms Press), author Christopher Chambers (A Prayer for Deliverance and NAACP Image Award nominee Sympathy for the Devil) presents the debut of one of the genre’s most unlikely new detectives: Dickie Cornish. The homeless survivor makes his meager living as a “scavenger,” cleaning out the homes of people who have been evicted as their Washington, D.C. neighborhood gentrifies, and keeping small trinkets and other items he finds. The D.C. setting, which is also the author’s hometown, is a microcosm of “everything desirable and discreditable” of other major U.S. cities, with the added element of close proximity of the underclass and wealthy bureaucrats and politicians. We recently spoke with Christopher about his new detective, and what makes him what fellow mystery author S.A. Cosby (Blacktop Wasteland) calls “a wholly original character that exists in a world at once familiar but startlingly brutal.”

TRP: Your new mystery, Scavenger, takes place in contemporary Washington DC, pitting the skills of Dickie Cornish, a street-wise survivor against Jaime Bracht, a politically-connected ex-government official. Dickie is an especially full character, who escapes stereotypes with the depth of your painting of him. Could you describe Dickie Cornish for our readers, and also discuss how you developed this extraordinary character?

Christopher Chambers: He came about by “accidental design.” George Pelecanos set a lot of his stories in and around my neighborhood. His sleuths and antagonists had about a hair’s breadth of moral space between them, and that was entirely due to the PTSD of survival. This neighborhood is now well gentrified, textured, layered—and the characters of George’s heyday, while not “done” as in extinct, have served their epoch and now it’s time for something new. So if I wanted to portray a hard bitten, hardboiled yet noir-flavored “antihero” from these streets, I had to go beneath the streets to the unseen, the untouchables: homeless people. Some struggling with narcotics, some struggling with staying human when humanity is fleeting. Dickie’s curse and nobility flow from one concept—his is profoundly self-aware of what it means to maintain human dignity. That’s what I wanted to convey yet still remain true to this crime genre’s “model” protagonist.

TRP: You live in DC, where the story is set. And DC itself is a character in your book. What is it about Washington, DC that makes it unlike anywhere else?

CC: Because it is New York, LA. Chicago, Boston, Charleston, Savannah, Atlanta…everything desirable and discreditable, even the look and feel, about those places, in microcosm…in a terrarium. It’s artificial, alien…yet familiar. Recently Donald Trump and Senator Tom Cotton maligned the place. Essentially saying there were too many minorities, too many “bureaucrats,” too many intellectuals, too many ignorant poor people. Well we are many things here. Funny how so many of the wealthy are not bureaucrats but serve the Pentagon, the security and surveillance state, lobby for the bigshots. But the proximity of “others,” one the other hand, to the seat of power meant we’d never have representation…which was envisioned by Jefferson, Madison after they held the nation’s economy hostage to get the capital moved here. See the play “Hamilton” if you don’t believe me! After the Civil War, Southerners in Congress ran it through a commission, until “home rule” in the 70s. But the vital, evil, sameness remains: too many black and brown people who flocked here for freedom during Lincoln’s presidency, many brown people coming as it was here Salvadorans, Hondurans, Ethiopians, Eritreans, etc. all came because it was the capital was safer for them than the interior. It’s no wonder that the powers that be then and now despise the idea of such people holding sway as they surround the federal enclaves. This place thus generates its own energy. Exhilarating and terrifying. Just as it generated mambo sauce and Go-Go music…

[Dickie Cornish] has a knack for collecting items with which to build a life of sorts, which prompted a fellow author to call him “Ghetto McGuyver.” That wasn’t my fanciful aim, because everything you see him prepare I have gotten from formerly homeless persons I spoke to before I wrote the novel. Indeed, one reason Jaime Bracht is comfortable recruiting him as a sleuth is his scavenger’s nose and sensibilities, and Bracht, representing the predators out there in the wild, is too specialized, too heavy handed.

TRP: Dickie Cornish is a “Scavenger”. Describe what that means, and then discuss how close this type of survival job is to reality in today’s DC.

CC: Well there’s a lot of allegory there, but here’s the practical and corporeal. He doesn’t like to panhandle. He makes his meager “living” on the “jump crews” unique to D.C. When a tenant is evicted from an apartment or house, the landlord can engage a US Marshal to supervise a clean crew to sweep in on very little advance notice and “trash-out” the premise, often with the residents standing there in their underwear. That is why a distraught woman screams that he is no better than a buzzard, a hyena or even a maggot, feasting on the dead. On another level, his colleagues will steal what they pile up in green bags on a curb. And he himself, owing to his drug abuse, his emotional issues, scavenges small trinkets from such piles and “holds” them as reminders. On the other hand, he’s also, like all scavengers, a survivor. He has a knack for collecting items with which to build a life of sorts, which prompted a fellow author to call him “Ghetto McGuyver.” That wasn’t my fanciful aim, because everything you see him prepare I have gotten from formerly homeless persons I spoke to before I wrote the novel. Indeed, one reason Jaime Bracht is comfortable recruiting him as a sleuth is his scavenger’s nose and sensibilities, and Bracht, representing the predators out there in the wild, is too specialized, too heavy handed.

TRP: Like the brilliant novels of Marlon James, much of SCAVENGER’s dialogue (interior and external), is written in the language of the street: patois, spanish, slang. How did you develop all the different voices you use? What do you feel it adds to the story?

CC: Again I have to shout-out to Pelecanos and of course Gary Phillips, going all the way back to Chester Himes. Simply put, it’s the literature of the “real.” Nothing is so real as crime, sadly; “crime fiction” is not an oxymoron. The language adds to the verisimilitude, the “realness.” The language becomes a character.

TRP: The book has a real sense of immediacy in your use of 2nd person voice. What made you use this style for this book? What are some of the challenges in writing in this voice?

CC: Without giving anything away, clearly Dickie has unresolved mental health issues being out on the street, and I wanted to hit the reader in the chest with a narrative carried by another voice. It might be his father. It might be his brain channeling his father. Either way the voice takes on its own point of view, can lie or obfuscate if it so chooses. It helps drive the plot because Dickie must figure things out with the voice’s “help” or “hinderance,” and it gives the character more depth and paints other characters and situations in a more interesting light, for example Dickie’s family trauma and questionable things he’s done.  I combined that with present tense because someone like Dickie is not living in a reflective, omniscient world, and that sends the pulses throbbing! The problem is balancing what the 2nd person knows versus what’s going on outside of Dickie’s purview. It’s also tough to maintain without getting gimmicky. I try to prevent that by showing the voice evolving, grudgingly, as Dickie gets more adept at his new “job.”

TRP: At its heart, SCAVENGER is about the intersection of a societal outcast, whose weaknesses are apparent, with someone who has spent his life hiding his weaknesses in order to achieve “success” as a government official. Yet by the end of book, the drug-using, semi-psychotic street hustler Dickie Cornish seems to be more honest, and have a much more developed moral code that the government man. Is this somewhat of a throwback to classic detective stories of Chandler and Hammett in which the detective, while flawed, has a greater sense of right and wrong? Explain.

CC: I think it bears on what I said before—Dickie is excruciatingly self-aware of why he’s living the way he is. He understands his flaws. He might not be good and controlling them but he knows they are there. Hammett and Chandler’s dicks, Pelecanos’, Mosely’s, the women protagonists of so many contemporary hardboiled female authors–they all possess this painful self-awareness and use it as a tool. The antagonists typically do not, and that’s manifest in “real life.” You don’t need to be Freud to “read” where certain billionaires  in tech, finance, etc. are coming from, or celebrities or a grifting real estate baron turned President. In the novel it’s the same for Jaime Bracht and his underlings, or the human traffickers, drug dealers, etc. Indeed the “femme fatale” trope we all must pay homage to the genre—what’s the defining attribute? Denial of self-awareness. Closing off that part of yourself probably does help propel “success.” But at what cost? And invariably someone like Dickie is thrust into the position of trying to set things back to moral equilibrium.

TRP: What do you like best about Dickie Cornish?

CC: That he can change. I won’t say “grow” because I make it vague if he’s “evolving” or merely transforming into the person he once was or could have been. He’s not an “antihero.” But neither is he a psychotic rube turned warm, functional, friendly, brave psychotic. He’s just a guy, trying to do better. And maybe I do have a soft spot for scavengers. By their nature they adapt.

About the Author:  Christopher Chambers is a professor of media studies, as well as a novelist published through Random House, MacMillan and Three Rooms Press. His previous works include the novels A Prayer for Deliverance and Sympathy for the Devil (NAACP Image Award nominee); the graphic anthology (with Gary Phillips) The Darker Mask; and the PEN/Malamud nominated story “Leviathan.” He was also a contribuor to the Anthony award-winning anthology The Obama Inheritance and Black Pulp 2 as well as The Faking of the President.  Professor Chambers is also a regular commentator/contributor on media and culture issues on SiriusXM Radio, ABC News, HuffPost. He resides in his hometown of Washington, D.C. with his family and German Shepherd, Max.