This month we’re celebrating all the mothers and mother-figures in our lives, along with our 3RP authors who have written about them. We’ve selected two of our favorite moments remembering and honoring the mothers who raised some exceptional writers and artists, and who did so much more besides. Happy Mother’s Day, with love from 3RP! 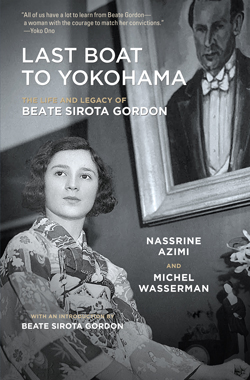 LAST BOAT TO YOKOHAMA celebrates the life and legacy of Beate Sirota Gordon: her secret work ensuring women’s equality in Japan while helping to develop the post-WWII Japanese constitution—at the age of 22; her broad influence on hundreds of Western performers such as Robert Wilson, David Byrne and Peter Sellars—who were introduced to leading contemporary Asian music, dance, theater and visual artists through her extraordinary cross-cultural efforts. The book relives Beate’s drive, talent, ambition, and influence, with intimate diary excerpts from her mother, an introduction by Beate herself, and an afterword from her daughter, Nicole. It has been previously published in Japanese and French, and is available for 3RP in English and Persian.

My mother was a very social person. She loved talking with artists, activists, and scholars. She always told my father what time she would come home, but she was always one or two hours late because she could not tear herself away from a conversation. And he was always furious about it!

Earlier in December, the Asahi Shinbun had asked her for an interview about the Japanese Constitution…She was no longer seeing people or even speaking on the telephone (which she had always loved to do!). But we arranged an interview to be done by telephone and, if necessary, in writing via e-mail that I would type for her.

She used her last strength for this interview, to speak one more time—emphatically in favor of preserving the Japanese Constitution. Beate hoped to encourage people in Japan working for peace.

This was just ten days before she died. It was truly her final effort.

She died knowing that she had done literally everything she could to support the Japanese people through her work on the Constitution. She had finished her work.

When Geoffrey and I thought about the best way to honor Beate’s memory, we decided that we should ask people, rather than sending flowers, to send support to the Article 9 Association11 and work for peace.

I brought Beate’s ashes to Japan so that a part of her, like her heart and spirit during her life, will always be in Japan—with a view of Fuji-san. 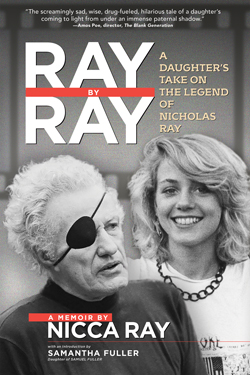 In RAY BY RAY, Nicca Ray remembers not only her famous father, Nicholas Ray, but also her glamorous mother, Betty Uitti. Betty was an acclaimed dancer who performed in and choreographed dance sequences for numerous Hollywood films. While her life was entangled with Nick’s, and her relationship with children often complex, in the excerpt below Nicca remembers the early days as she, her sister, and her mother first left her father, and committed herself to raising her two daughters.

Betty was waiting for us at the end of the jetway when our plane landed at Los Angeles International Airport. She was so happy to see us, but I didn’t know who she was. I started holding my breath. She picked me up and held me in her arms, but I still wouldn’t breathe.

Julie instructed Betty to turn me upside down until I started breathing again.
. . .
We picked our suitcases up from baggage claim and piled into the Buick Skylark that Betty had bought but didn’t know how to drive. Joy sat in the passenger seat and Dorsey drove. Dorsey was a close friend and an actress Betty had met through the actor, Rafael Campos, in the 1950s. Julie and I sat in the backseat of the Buick with our mother between us. “It was the first time I’d ever had Julie and Nicca as my own children,” Betty said.

But, for Betty, “Nicca and Julie saved my life. I was just so proud of them and so thrilled to have them with me,” she said. “If I hadn’t had them in my life, I don’t know if I would have ever gotten out of that bed. I really had to get well fast. I was desperate that Nick would put them in a boarding school somewhere. I didn’t know what he was going to do.”