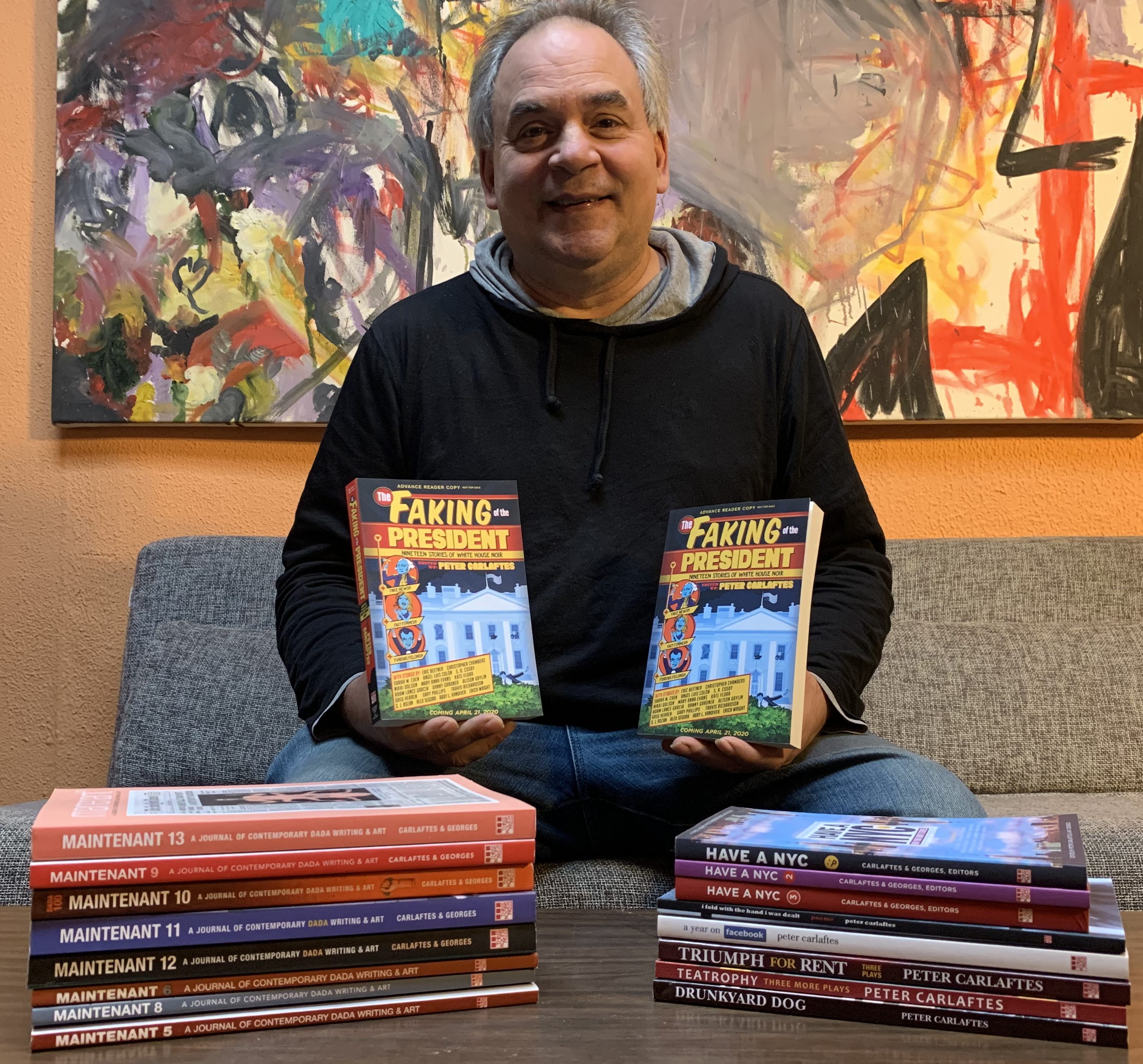 How do you create a short story collection that aims to change society? THE FAKING OF THE PRESIDENT editor and TRP co-founder Peter Carlaftes sat down with TRP’s Mary Rose Manspeaker to talk about the work of editing and producing stories in our current political climate, the genre of noir, and fiction as a vehicle for change. But don’t worry, it’s not all so serious—what would a TRP short story collection be without a little black humour? Coming out April 21, 2020, THE FAKING OF THE PRESIDENT includes presidential (and first lady) fight-scenes out of an action movie, a red squirrel takeover of the White House, a president with a wooden heart, and more.

Pre-order your copy of THE FAKING OF THE PRESIDENT via Amazon, Barnes & Noble, or IndieBound.

PC: The backstory to THE FAKING OF THE PRESIDENT began with a conversation between me and Noir & Pulp Guru Gary Phillips. We had worked very successfully on THE OBAMA INHERITANCE a few years back creating the genre of Conspiracy Noir so when I mentioned a companion piece to TOI with White House Noir he told me “This one’s YOUR baby.” I took the idea of White House Noir and ran with it along with seven of the contributors to TOI, including Gary. We added five more talented writers from other anthologies that Three Rooms press has published, and then reached out to six other gifted voices I hadn’t worked with, before adding my own story, to come up with Nineteen Stories of White House Noir and the most satisfyingly diverse group of authors we’ve ever assembled.

#45 is a composite of all seven layers of Dante’s Hell, but America didn’t just start turning the other cheek to injustice in 2016. There have been myriad wrongs perpetrated by its leaders since its founding, so exposing the Injustice which gushes from the open wound that was and is this country using elements of Noir is a major accomplishment as through exposure comes awareness and from awareness comes change.

MRM: The completed collection definitely has a unifying voice, underlying the unique perspective of each writer. How did you pitch the project to draw out the stories in the collection?

PC: This was my actual pitch…

Only this time around, we’re going to turn the office of US President on its end. I mean we already HAVE a fake president in office, so we intend to use THE FAKING OF THE PRESIDENT as a personal vendetta against His Orangeness. A kind of Twilight Zone for Presidents past, present, and. . . possibly future–

Each writer chose a US President, from #4 James Madison through the possible 2024 election of #46 Mike Pence–Egads!!!

MRM: Is there any other reason you were drawn to noir fiction as the vehicle for this tool of the resistance?

PC: I think the main purpose we’ve set out to achieve with this volume is to have given so many other past leaders the spotlight so ultimately loosening the current succubus’ media grip thus exacting a literary coup d’état!

And using the fictional Noir formula allows us a chance to leave the reader with the knowledge that there is still clearly a way out for us and the path leads to the polls on November 3.

MRM: What would you say are the main elements of “White House Noir”?

PC: Most definitely unmasking self-interest chosen over common good, revealing how the media can be manipulated, and especially in this case White House Noir demonstrates that Absolute Power Absolutely Corrupts.

MRM: Finally, what is this book going out into the world to accomplish? Why are these voices so necessary right now?

PC: #45 is a composite of all seven layers of Dante’s Hell, but America didn’t just start turning the other cheek to injustice in 2016. There have been myriad wrongs perpetrated by its leaders since its founding, so exposing the Injustice which gushes from the open wound that was and is this country using elements of Noir is a major accomplishment as through exposure comes awareness and from awareness comes change.

Change is what each writer in THE FAKING OF THE PRESIDENT wants their story to inspire. The equation we have ultimately created with this volume is: 2020 = 46.