↓
Home→Author Interviews→None of Us Can Go to Them—Peddling Pipe Dreams: An interview with Robert Silverberg
Share This! 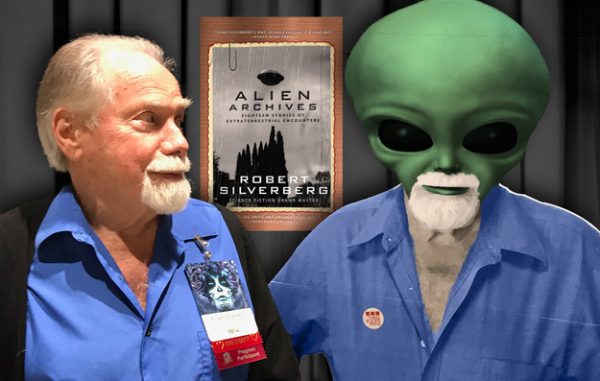 Tuesday, October 29 marks the Three Rooms Press release of science fiction Grand Master Robert Silverberg’s ALIEN ARCHIVES: Eighteen Stories of Extraterrestrial Encounters, a book that Foreword Reviews cited as a collection “for a new generation looking for life beyond our stars. . . .and a delight for anyone who still wants to believe.” Does the author himself believe? 3RP co-director Peter Carlaftes sat down with Silverberg to find out.

3RP: In the latest anthology ALIEN ARCHIVES: 18 Stories of Extraterrestrial Encounters, all classics written throughout your career, you unequivocally acknowledge that the universe is full of non-human life, but in the same stroke, you add that, “We are never going to encounter any of these alien beings.” Why the opposite poles?

RS: It may seem irrational of me to have written a whole book of stories about things that I don’t believe are going to happen, but I remind you that these are science-fiction stories, and the essence of science fiction is what if—

3RP: Could you elaborate? 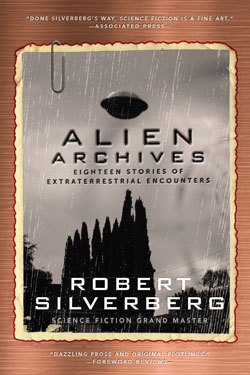 RS: Back in far-off 2004 I wrote an essay for one of the science-fiction magazines titled “Neque Illorum Ad Nos Pervenire Potest,” which is Latin for “None of us can go to them, and none of them come to us.” The phrase was that of the twelfth-century philosopher Guillaume de Conches, writing about the supposed inhabitants of the Antipodes, the lands that lay beyond the fiery sea that was thought to cut Europe off from the as yet unexplored Southern Hemisphere. I used it to express my belief that we are never going to have any close encounters with the inhabitants of other solar systems. They’re just too far away.

3RP: Don’t you find this a bit disillusioning?

RS: It’s disheartening, I’ve spent six decades writing stories about other worlds and other intelligent life-forms, and I don’t like the idea that I’ve simply been peddling pipe dreams all this time.

3RP: Who peddled the pipe dreams that inspired you as a child?

RS: The comic books I read as a small boy, seventy-plus years ago, were full of gaudy tales of “Martians” and “Venusians”. Then, in 1948, when I discovered such pioneering collections of science fiction as the great Healy-McComas anthology Adventures in Time and Space and Groff Conklin’s splendid A Treasury of Science Fiction, such stories as Eric Frank Russell’s “Symbiotica,” A.E. van Vogt’s “Black Destroyer,” and Arthur C. Clarke’s “Rescue Party” lit up my adolescent mind with visions of galaxy upon galaxy filled with an infinite number of intelligent non-human beings. The thought of those infinities still stirs me, so many decades and so many stories later, whenever I look toward the night sky.

3RP: Let us just speculate for a moment that Aliens land on the planet today and seek you, Robert Silverberg, out because they’ve held your writing style and content in higher esteem than any other Science Fiction author in the history of time. They feel “You Get Them.” And now, they have come to take you back and show you their world for one week. Do you take this journey?

RS: Of course. I do want to know what those alien races look like, how they think, what kind of cities they live in. I’d love to read alien poetry and look at alien sculptures. I might even want to risk dinner at a five-star alien restaurant. But none of that is going to happen. . . The speed of light is going to remain the limiting velocity not just for us, but for all those lively and interesting people out there in the adjacent galaxies, and that puts the kibosh on the whole concept of a galaxy-spanning civilization.”

3RP: But you definitely believe there are other life forms in the Universe?

RS: Of course! Since there are 100 billion M-type stars in the galaxy and the Kepler findings show planets around many of them, the Caltech people believe it’s reasonable to think that they average one habitable world apiece—100 billion more or less Earth-type planets, and that’s billion with a b. A billion, remember, is 1,000 million. Somewhere in all those billions and billions, surely, dwell the alien beings I was reading about in the sci-fi anthologies of the 1940s.

3RP: Yet Humankind should not expect an extraterrestrial encounter ?

RS: As I said and must believe, there won’t be any Galactic Federation; there’ll be no Bureau of Interstellar Trade; no alien wines or artifacts will turn up for sale in our boutiques. Nor will we meet the real-life equivalents of George Lucas’s Wookiees, Doc Smith’s Arisians, Fred Pohl’s Heechees, Larry Niven’s Kzinti, or—just as well, perhaps—A.E. van Vogt’s terrifying Coeurl. The aliens exist, I’m sure, but the sea that separates us from them, and them from us, is just too wide. And as Guillaume de Conches said in a different context, long ago, Nullus nostrum ad illos, neque illorum ad nos pervenire potest. None of us can go to them, and none of them come to us. Except, let me quickly add, by way of the tales that science-fiction writers tell.

3RP: Thank you for your time and thoughts. And now Humankind can prepare itself for ALIEN ARCHIVES!!!

Order ALIEN ARCHIVES today from Three Rooms Press or from these other book retailers: